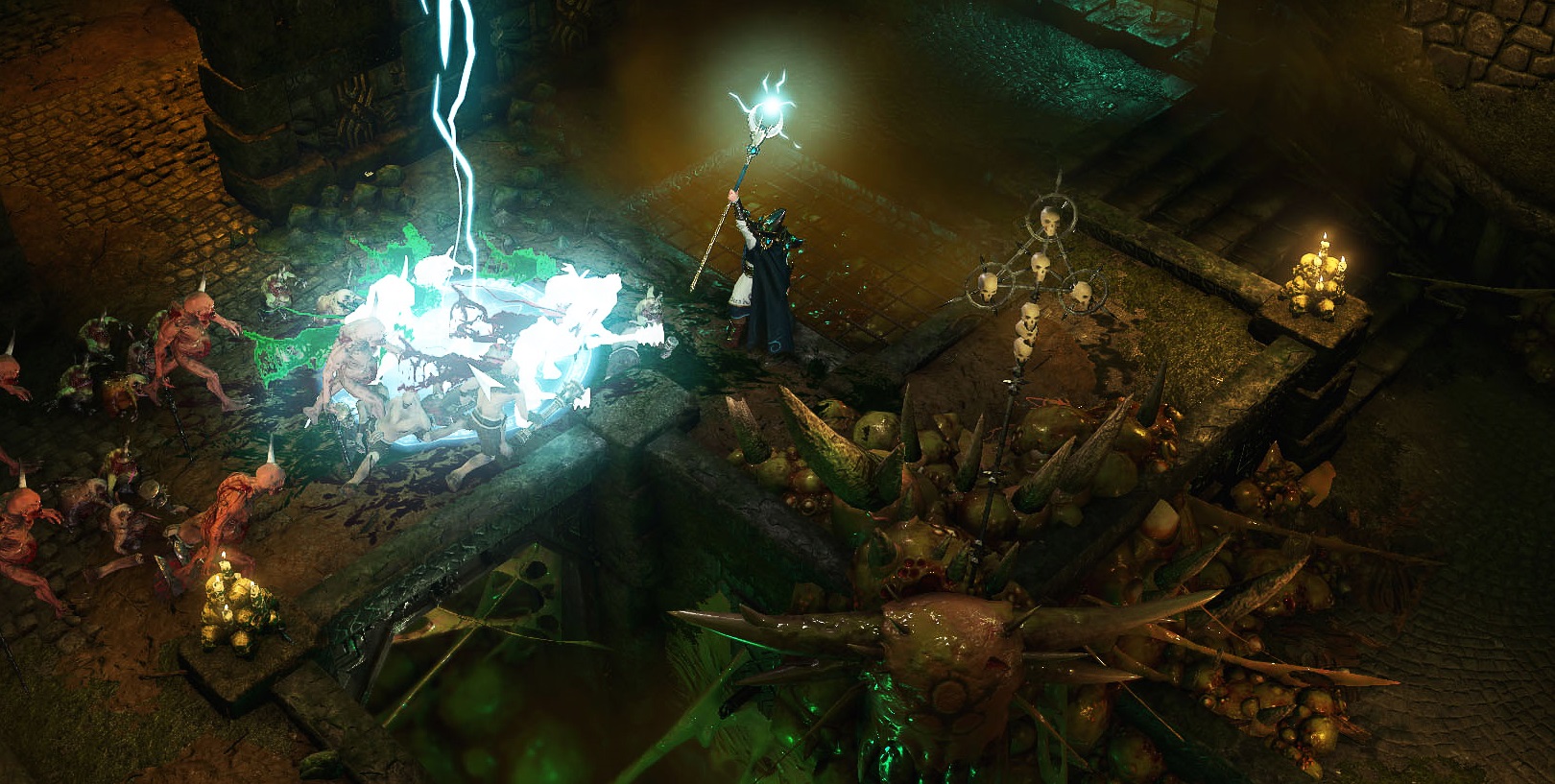 Players are in the Warhammer universe. You, know the same place where the space marines are. Warhammer: Chaosbane is a world that’s dominated by magic and war. The enemy is the horde. A chaos horde. The story is simple and the action is what you’d expect.

There are four character classes in Warhammer: Chaosbane. Wielding some very powerful artefacts. There’s a high elf who’s all about ranged attacks with magic, an empire soldier who’s basically the tank of the group, a wood elf who uses lethal traps and has a bow (there’s always a bow), a dwarf who just loves melee combat. So it’s the typical tank, ranged, magic and traps. Pick your type. 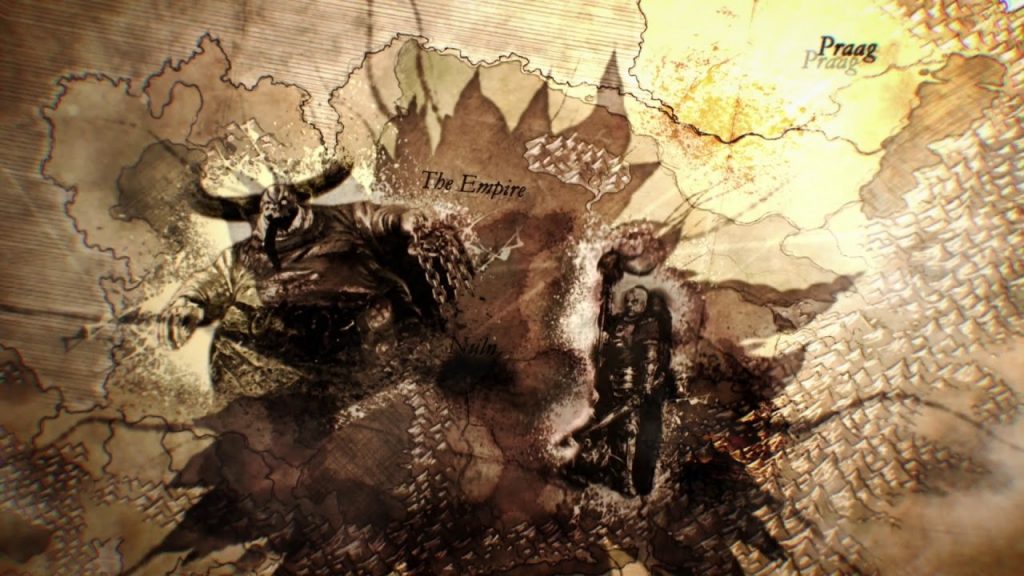 Now notice that there is four types of characters and it’s a hack and slash with that high up camera and there’s loads of enemies. You just know Warhammer: Chaosbane has multiplayer. We are right. It’s four player co-op. Both online and local. We always appreciate it when developers allow local multiplayer. We respect that.

There’s more to this typical hack and slash than you think. Warhammer: Chaosbane has some replay value as there’s a boss rush mode which is all about facing the bosses (obviously), they claim to have regular updates and countless dungeons. 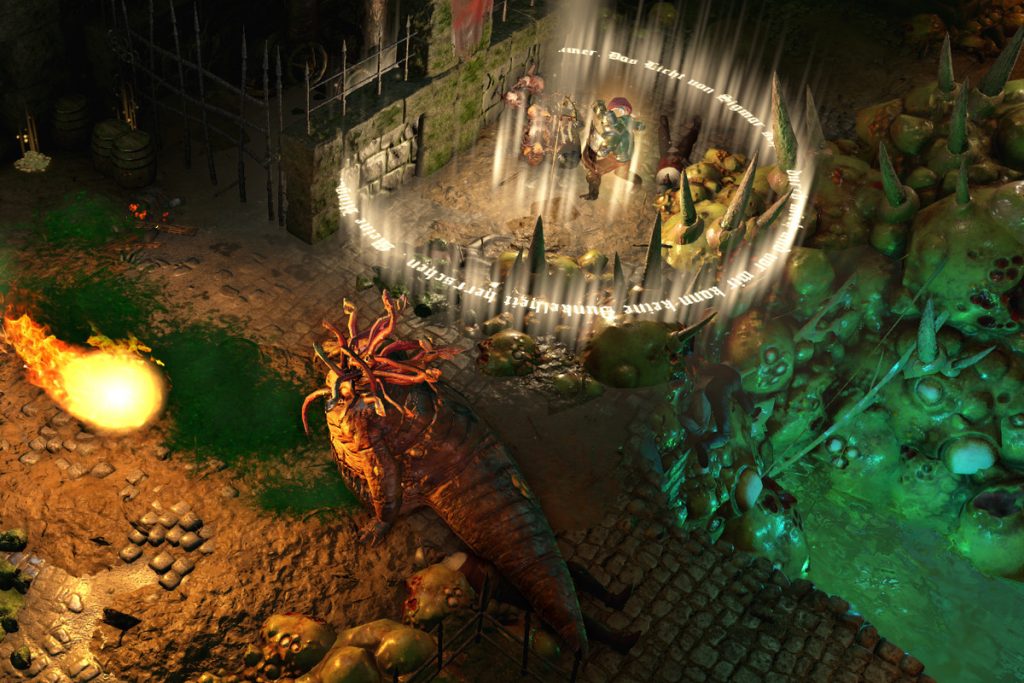 There’s over 70 different enemies. These enemies aren’t alone as they will also work alongside powerful bosses and even chaos gods. There are more than 180 different skills for players to learn and use to destroy the enemies and keep that advantage. Don’t forget to use your bloodlust ability. Just saying.

We checked out some gameplay and it’s what we thought it would be. Run around, see enemies, they rush you, you use your abilities and whatever to survive. A hack and slash for sure. If you’ve played games like this before, then you would understand. Games like this stick to this style. Quite a bit of work went into this game. Warhammer fans will recognise some famous locations like Nuln or Praag in this game.

Overall Warhammer: Chaosbane just looks like another RPG hack and slash. The graphics are alright, the attention to detail is good and the sounds are good. There isn’t really all that much to say about this. The developers ‘Eko Software’ did an alright job with this game. We at X35 Earthwalker aren’t looking forward to Warhammer: Chaosbane. It’s not our type nor does it have anything that interests us. Now Warhammer: Chaosbane may have over 180 abilities but not one of those can do anything against.. the ‘Earth Walk!’ 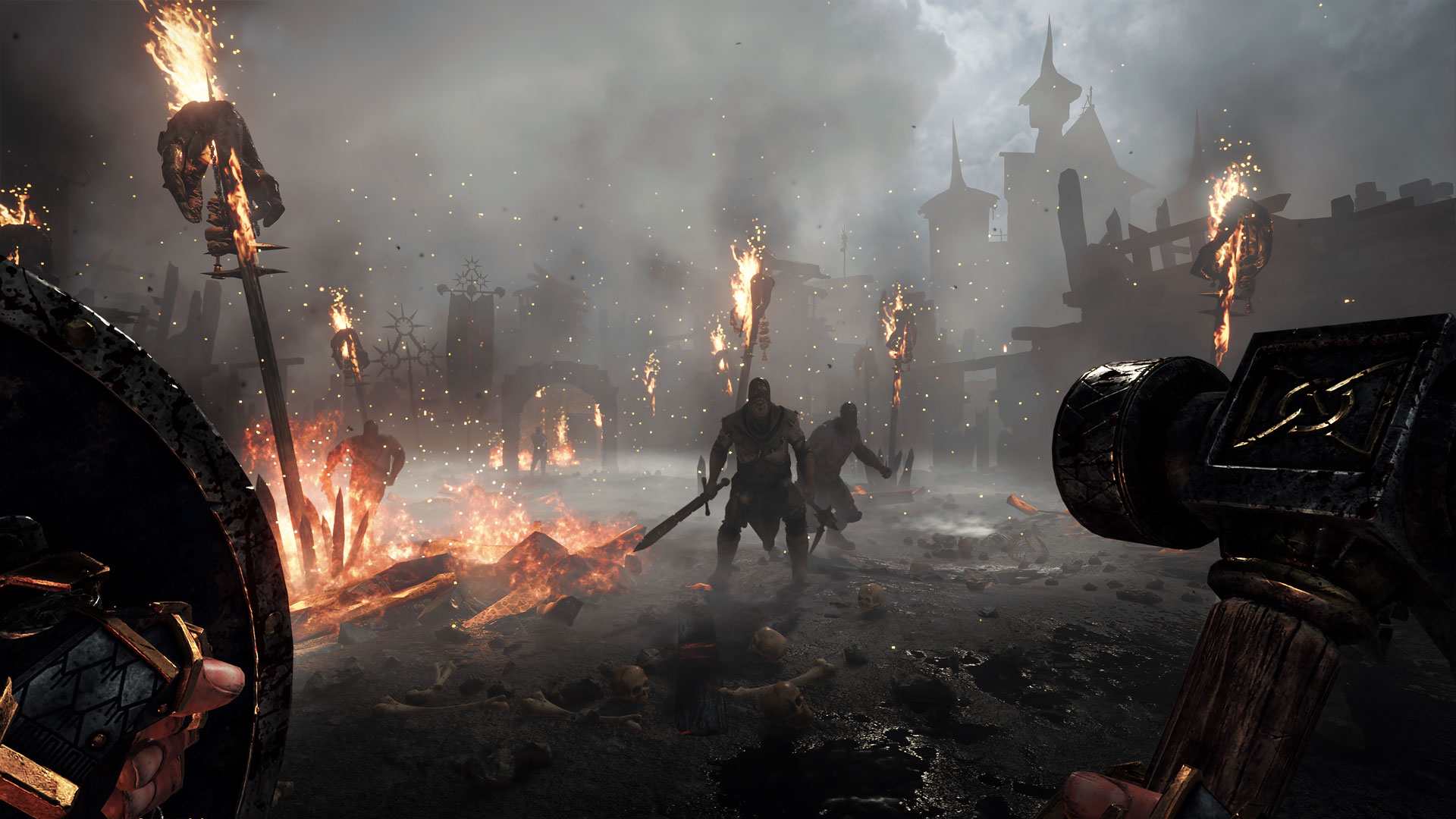 Warhammer Vermintide 2 is the sequel to Warhammer: End Time – Vermintide. It is a first person co-op action game developed by ‘Fatshark’. I’s coming out early 2018 for the Xbox One, PS4 and PC. The rats are back but wait… there’s more! Let’s take a look.

Warhammer: End Times – Vermintide was a vicious first person co-op that many gamers jumped into and slaughtered some rats. Like seriously, who likes rats? We don’t. In Warhammer Vermintide 2, those rats are back but wait… There’s more! The warriors of chaos are here! Even worse they have teamed up with the relentless Skaven ratmen. They have a dark pact and one goal in mind… to destroy humanity and do what they want with the realms of man. Clan Fester of the ratmen is really vexed with man for what happened at Ubersreik. This time they ain’t about to let a couple of humans ruin everything. They got friends who will make a difference.

The warriors of chaos are is made up of dangerous norsemen who’s clan goes by the name ‘Rotblood’. They are crazy and serve Nurgle, the god of pestilence. He sounds like a pleasant god doesn’t he. Who doesn’t want pestilence? Now they have one goal in mind and that’s to completely destroy the empire. They literally want to leave nothing behind. Now the warriors of chaos are quite a variety as some look humanoid and weird dangerous weapons like axes while others just look like deformed monsters with tentacles, horns and worse. Now imagine this force but teamed up with the ratmen. That sounds like a problem. 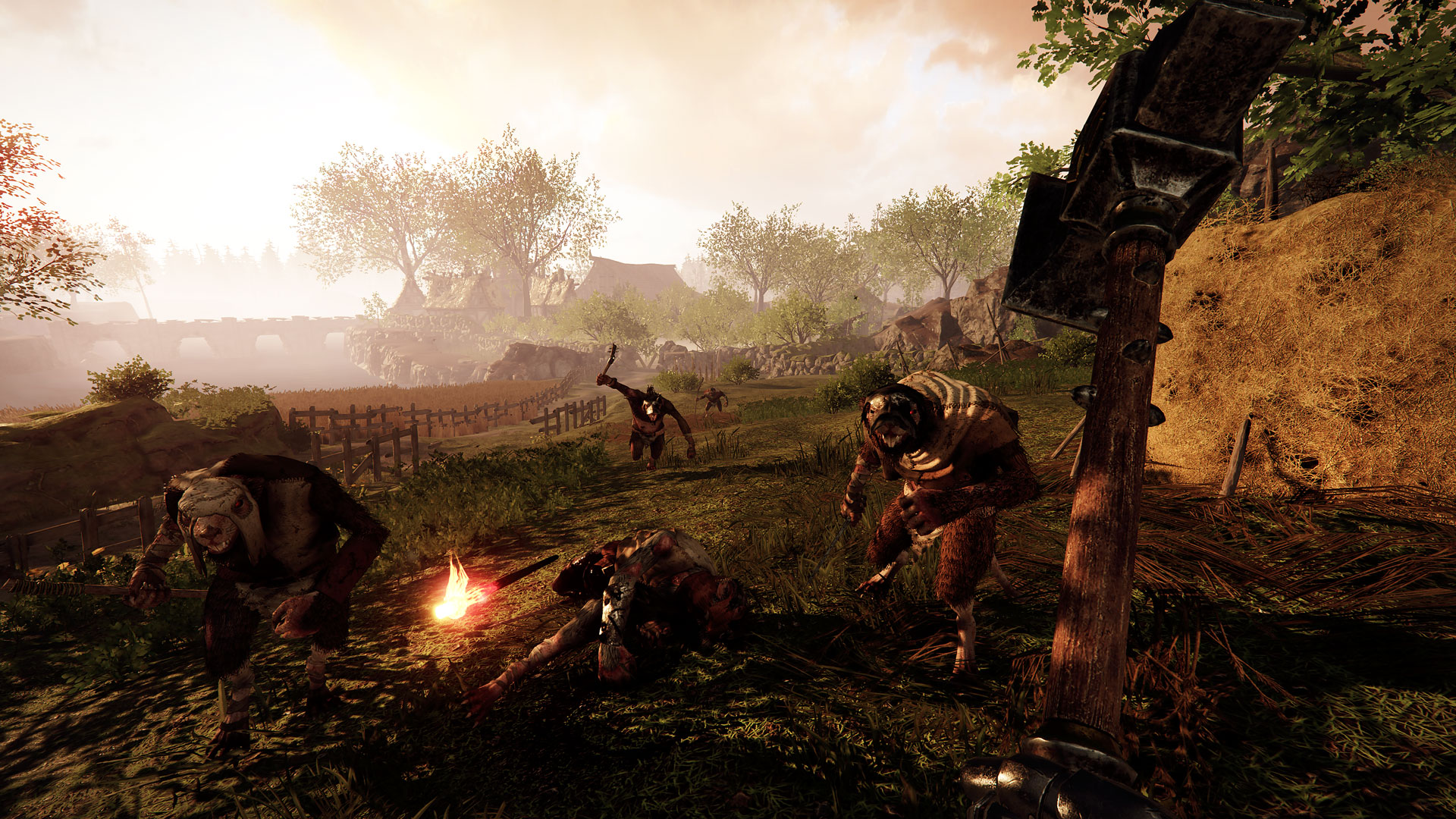 The heroes are back! The five from Ubersreik: Bardin Goreksson, Kerillian, Victor Saltzpyre, Sienna Fuegonasus and Markus Kruber are here but things are better than before. There are 15 unique careers  with their own play styles, own talent tree, active and passive abilities, access to unique weapons and equipment and adds depth to character progression. So be prepared to get in deep with your characters as there is much more experimentation to be done.

Now Warhammer Vermintide 2 has added some new things and really mixed some stuff up. This time the fight will be focused on Helmgart. There is also a new Spawn Director which makes sure that overtime you play through the game, it is different. The enemy spawning and formations are always changed up and pretty much unpredictable. There is a new and improved loot system. The rewards you get are completely connected to your hero and your the career you are currently playing. There is much more weapons and accessories in Warhammer Vermintide 2. Much more. So now character build will be more deeper, more to think about and off course more important.

It has been said though that matchmaking has been completely improved with a support for dedicated servers. this should make all the difference. Another new feature is something called ‘The Keep’. The Keep is the new head quarters for the heroes. The new base of operations. This is where all the tactical stuff happen. This is where all the planning is done as well. Here you decide what missions to go on. There is also a practice room where players can test and try out abilities, weapons and talents. We hope it’s like that special room in Dead Space 3 where you could construct and build weapons to test on Necromorphs with unlimited ammo. For those who are about showing off and war glory, you can also hang up and display your battle trophies.

There is also the ‘Heroic Deeds System’. this is new and will shake things up for even veteran players. The best way to explain this to use the exact words from the Warhammer Vermintide 2 official website, which says “Experience special scenarios and unique trials through the Heroic Deeds System. These consumerable quests will place you in strange new settings, dramatically change the mix of enemies you face, limit the use of weapons and abilities, or give you unusual mission objectives.” This sort of reminds us of the spartan ops from Halo 4 where there were full missions but nothing like the campaign and anything could sort of go in there. Let’s see how Warhammer Vermintide 2 handles this. 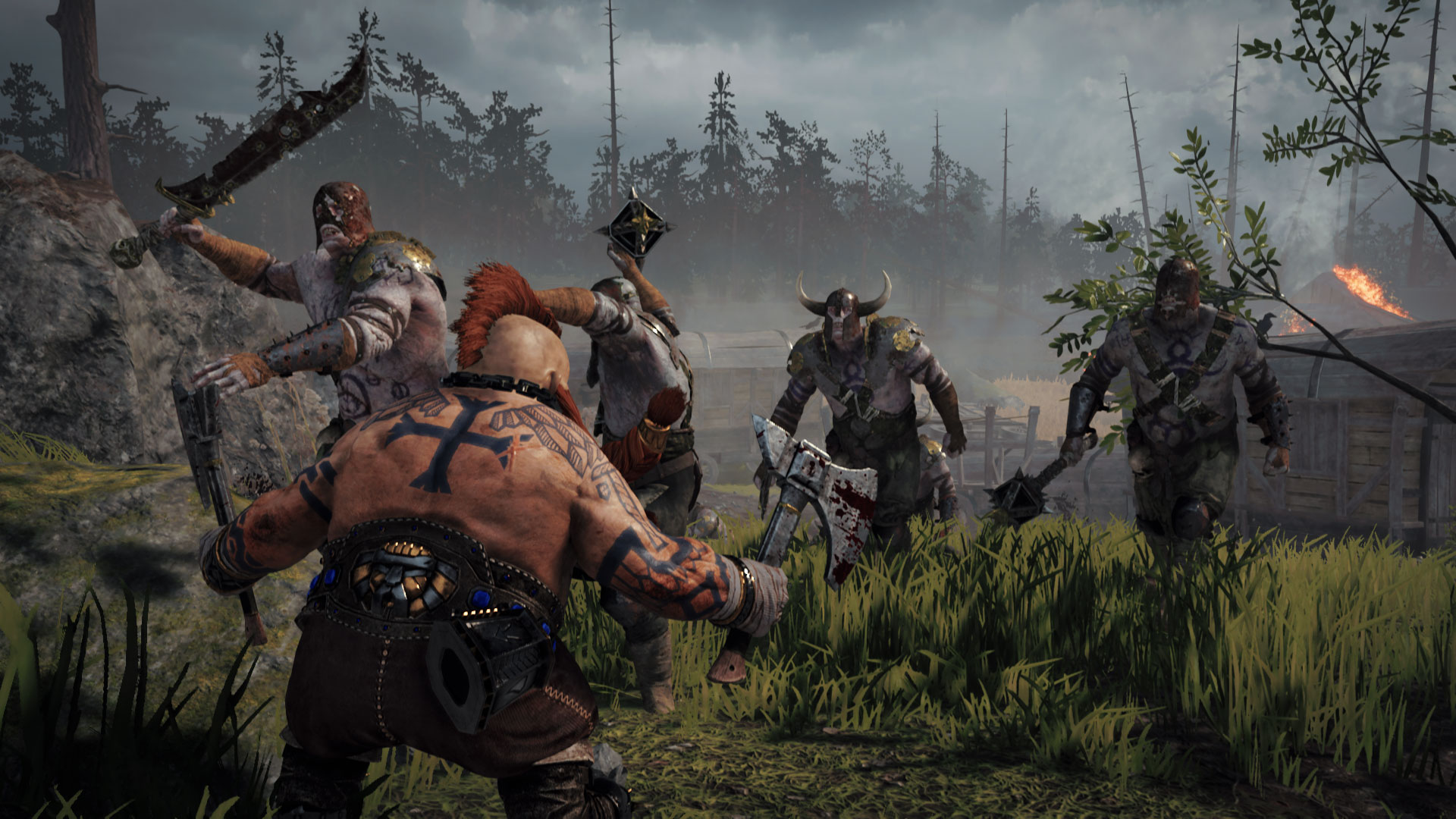 We checked out some gameplay and can confirm that things do look better. The combat still looks as stiff and not much mobility as before but the combat it’s self is different. The enemies seem to have slower heavy attacks and light fast attacks. Their amour seems to play more of a role as well. The heroes movements during battle seem more complex than before which will make fights more engaging and interesting. The graphics are definitely improved as the surroundings look great and the sounds of strikes and clashing with amour is also very good.

Overall Warhammer Vermintide 2 looks like a complete improvement over the prequel Warhammer: End Times – Vermintide. Graphics, sounds, combat, features, loot system, enemies are all taken to a higher level; however it hasn’t won us over at X35 Earthwalker. The first game didn’t impress us at all and we actually didn’t end up enjoying it. The combat felt so stiff. off course many enjoyed it and we are sure many will enjoy the sequel as well but we will need to see and know more to find out if it is our thing or not. The developers ‘Fatshark’ did a great job with this game. We at X35 Earthwalker will keep an ear open for Warhammer Vermintide 2. Now Warhammer Vermintide 2 may have new enemies but that still isn’t enough to defeat… the ‘Earth Walk!’ 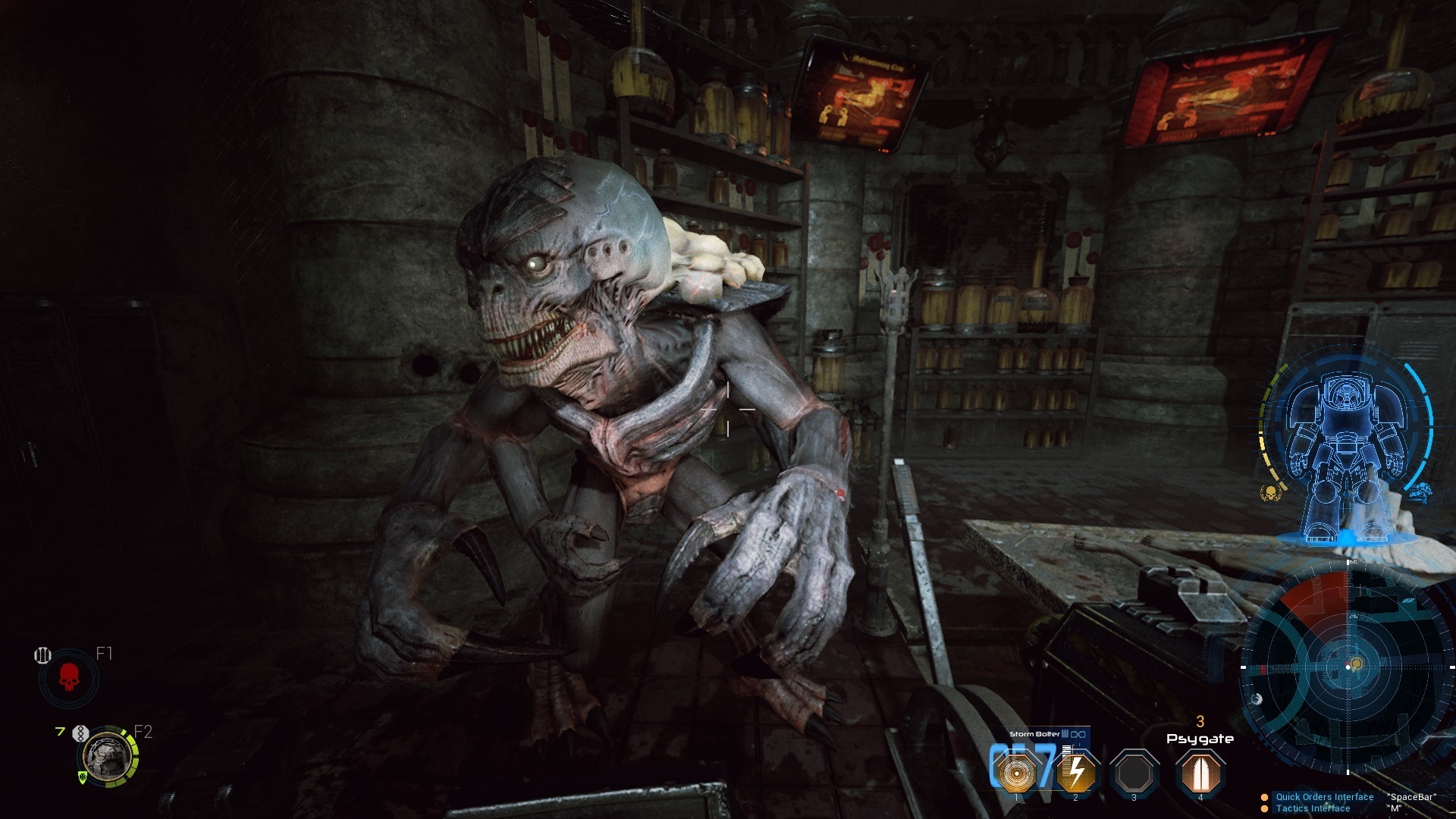 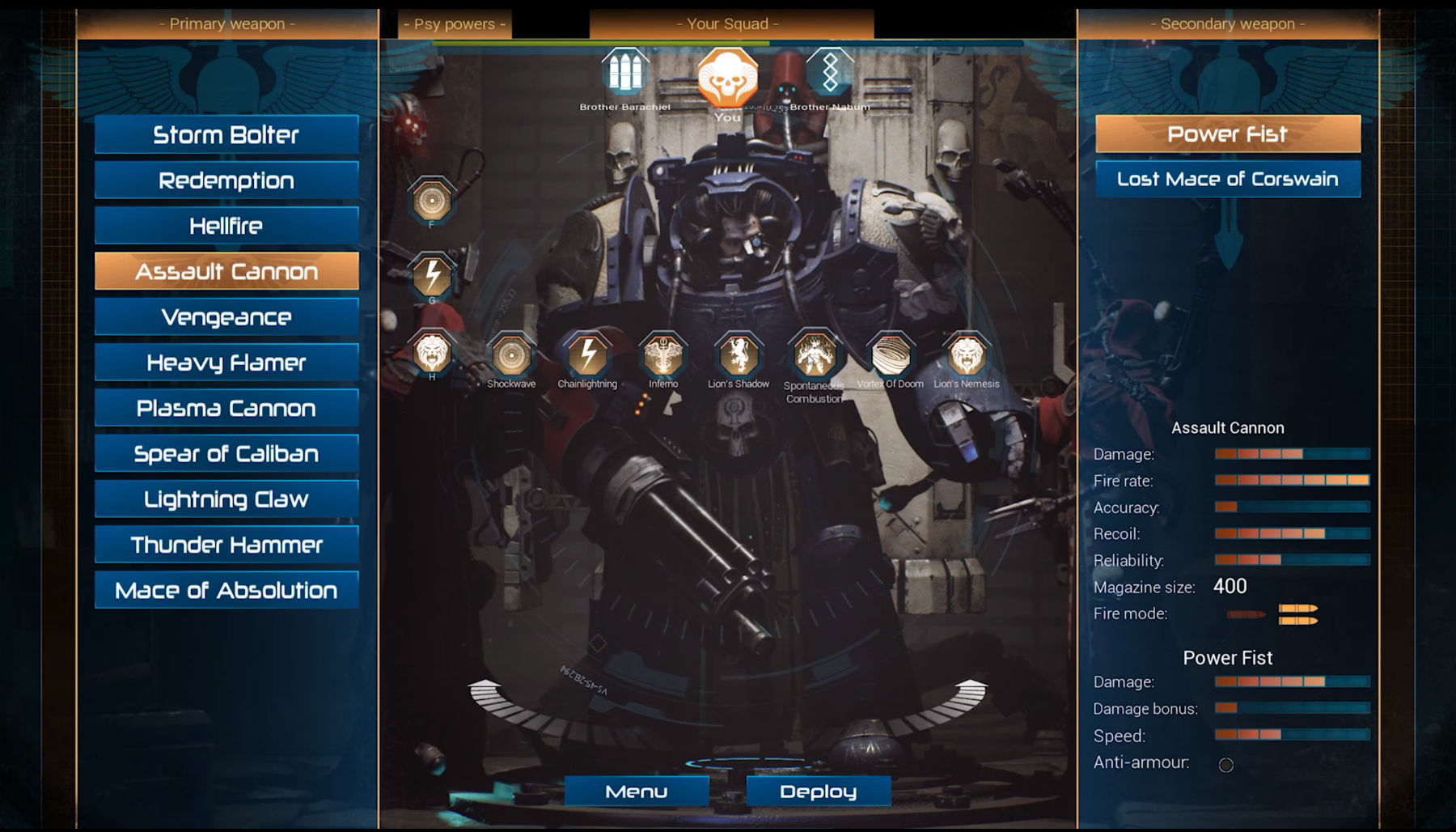