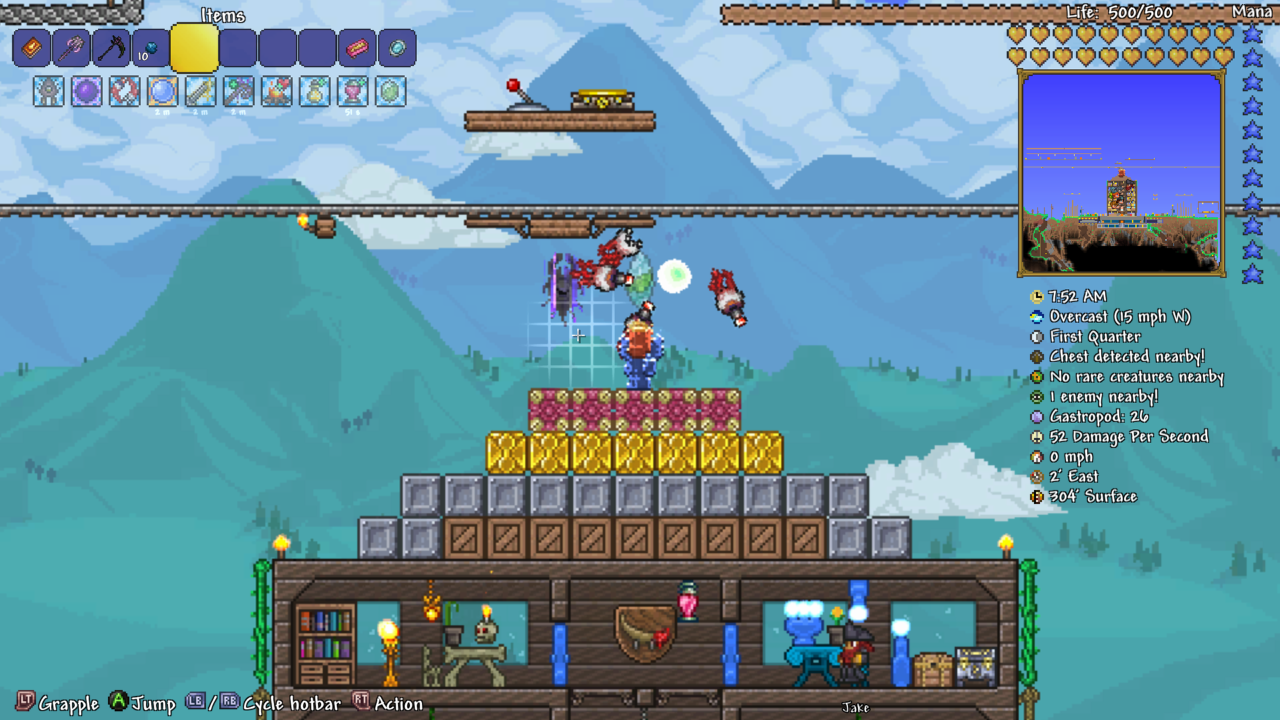 Terraria is a very good action adventure sandbox game. When you play the game you see how different and bigger it is compared to Minecraft. Terraria certainly stands out when it comes to the bosses. Many struggled and didn’t even know how to beat them. It took planning, resources and exploration in order to be ready to face them. So you’ve beaten everyone and feel like the ruler of Terraria. So you are finally finished right? Wrong! There is expert mode. Here’s where things get interesting.

To make things simple, expert mode is basically just like the normal mode. You find resources and things the same way and even craft the same way. The only real difference is the enemies. All the enemies are stronger as in they have increased health and deal more damage than ever before. This isn’t a joke. Pretty much every player was caught off guard with how much stronger they were. From when you start the game, a slime is very capable of killing you by itself. A slime! We aren’t joking. Oh and you better make sure you have some shelter before the night comes otherwise you will die guaranteed. The zombies cannot be held back for long with your short copper sword. The knock back isn’t enough and they will get through. Scary? Probably.

The main attraction is the bosses. You thought you handled them in normal mode. You thought you owned them and told them they were trash. How silly of you players. Did you really think you can beat them and be done with them? They are back and expert mode for most of them has not just given them increased health and damage (big increase) but also given them new attacks or abilities. This meant a number of players had to switch up their strategies.

For example King slime is considered the easiest boss in the game but not always the first boss you meet. King slime still hops around in expert difficulty but not comes with an army of slimes to fight alongside it. So expect purple, green, blue and even pinky slimes to keep raining down and getting in your way. King slime will summon blue slimes thats have spikes who are more dangerous than regular ones. King slime can also teleport in expert difficulty! So trapping it behind some walls and leaving a gap for easy arrow shots won’t work. It will appear on top of you dealing heavier damage. No where is safe. Eye of Cthulhu is perfectly the same except that it’s second form has taken some steroid because it now launches at lighting speed trying to ram the players. You will need speed to stay away. Just run in a straight line and it misses all the time. Just keep calm and don’t panic.

The brain of Cthulhu is a mean one, simply because it’s second form as it chases you it creates three other mirror images of the brain which become more visible as it loses health. Also expect more negative status effects. If you focus you can tell which brain is the real one and use long ranged weapons. High knock back weapons do help. The Eater of worlds is the same in expert difficulty except for the fact that it periodically shoots vile spit from it’s body. Those vile spits can give you the weak debuff. We suggest fighting this boss on it’s home turf as they are more narrow so chance of getting hit with a vile spit is so low. Use weapons that pierce through enemies. The Queen Bee, the real one, not some singer is much more different in expert difficulty than others. The Queen Bee’s fires stingers quite rapidly with near perfect aim, can summon bigger than normal bees to attack you and as she loses health, she performs all her attacks much faster. The ram attacks are deadly at this point. Use the honey at the bottom to regenerate health faster and remember that she can be poisoned.

The wall of flesh is basically the same, still moving towards you and allowing no escape. On expert difficulty the Hungry that you fight and shoot will respawn as long as the wall of flesh is alive and the leeches that it releases are more annoying and have a lower chance of dropping hearts. Be ware in expert mode the wall when below 500 hp can move at 50mph! This faster than the Hermes and lightning boots. So make sure you are far enough before getting it too low. Some say use a mine cart but we did it and others have without a mine cart. Piercing weapons work very well. The hell wing bow with jester arrows helped us out quite a lot. Also aim for the eye instead of the mouthing you can as the eye has less defence, so you’ll deal more damage.

Now for the dreadful part. The three mechanical bosses: The Destroyer, The Twins and Skeletron prime. These three rule the night and strike fear in the hearts of even the seasoned Terraria players. Like with the other bosses, they have increased health and really increased damage. Aim for the destroyer first. Functions the same way in expert difficulty. The only difference we noticed is that it’s head deals insane amounts of damage. If not prepared it can deal over 200 hp worth of damage in a single blow. Use your mini map to see where and when it’s coming for you to dodge. Have a camp fire, heart lantern and even a small pool of honey for maximum health regeneration (use a regeneration potion too). We beat the Destroyer in expert difficulty by fighting in a box that’s above the ground. The walls protected us from probe attacks until they come within our melee range.

The Twins are a problem indeed. Yes we know their names are: Spazmatism (fire one) and Retinazer (laser one). We will call them fire and laser. In expert difficulty both fire and laser got a tune up. Fire charges much faster and further than before. Seriously it will surprise you. Also the cursed inferno debuff lasts twice as long on players. Laser fires faster and also charges further. Aim and take out Fire first. It’s capable of the most damage. Stay at mid range minimum and never get close because it’s flame thrower attack can easily end the fight thanks to it’s crazy damage. Laser isn’t really a problem. We even ended up taking very little damage from it when you have good armour like hallowed or frost. We used our Sky minerail to have the speed advantage and keep the distance but don’t travel to fast as it may despawn. Ranged weapons are a must and use the golden shower of ichor flasks to inflict the ichor debuff which lowers their defence by 20. Matter of fact, the Twins are susceptible to all the debuts except confuse. So stack up the burning, cursed flames, shadow flames, frost burns and whatever you like.

Skeletron prime felt exactly the same. Off course in expert difficulty it gets increased health and damage but other from that, it felt the same. Fight on platforms as the bombs it launches explode on solid surfaces. With some practice and good observations you can jump and avoid the attacking limbs with medium difficulty. The laser is something we like to aim for and destroy first as thats the annoying limb. If you destroy the laser and the two melee limbs then the rest of the fight is a joke. Skeletron Prime is susceptible to frost burn so using the frost armour can really help. We again used our Sky minerail against this boss, hopping in our carts to dodge the melee limbs if possible. Yoyos are very good for sawing away at Skeletron prime’s head while spinning as it moves slowly making it a easy target. Make sure to apply the ichor debuff at all times.

Off course this isn’t all the bosses. We know all about the golem, plantera, duke fisheron and more. Plantera definitely got a new engine in expert difficulty but we will save those guys for another time. We’ve seen many struggle and get destroyed by these bosses so don’t listen to those foolish people who say everything is easy and that you need to get good. They are hard but definitely beatable. First focus on your battle ground and set it up to give you as many advantages as possible. Regenerative things, space to move around if serious evasion is needed and off course equip the right items and increase your defence as much as possible. Always have your potions ready. For expert difficulty have the iron skin, endurance, regeneration and thorn potions as they are a must. open some time fishing to get the ingredients to build more powerful potions like life force which increases your maximum health, summon which increases the amount of minions you can have fight with you, wrath and rage which respectively increases your damage and critical hit chance by 10%.

Expert mode is no joke but we are confident you can beat the bosses. If you want to see some epic Terraria gaming action then make sure to follow our YouTube channel and Livestream channel on Mixer. So to all the Terraria players, do your best and keep trying. Now Terraria may have large and powerful bosses that got even stronger in expert difficulty but even if all of them worked together, they are no match for… the ‘Earth Walk!’