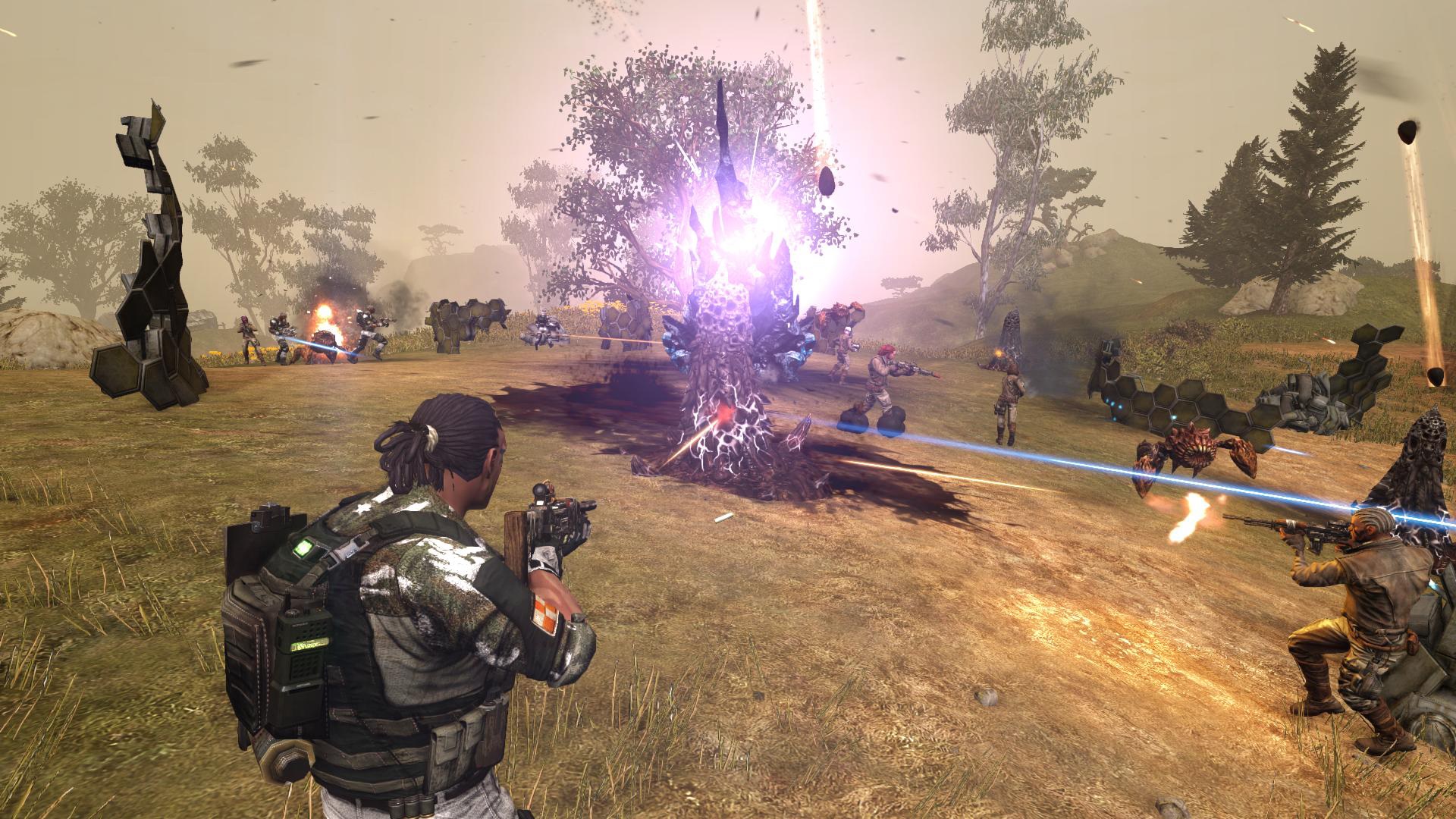 Defiance 2050 is a new massive multiplayer cooperative shooter game developed by ‘Trion Worlds‘. It’s coming out the 10th of July on the Xbox One, PS4 and PC. Defiance 2050 is out to make it’s mark in the world of gaming. Let’s take a look.

In Defiance 2050 players take on the role of a ark hunter who is in a race for alien technology. This is all because some beings called the Votan, showed up and terraformed the earth. Earth is far from safe and your life could end incredibly fast. An ark hunter is a pro in salvaging, tracking, survival and combat. They go where others will never go and retrieve alien technology. When any alien technology falls from orbit onto earth, the ark hunter must race there, fight of other aliens and ark hunters to get the goods for themselves. So players can either hunt alone or in a team.

The world in Defiance 2050 is pretty much alive. What did you expect it’s a large open world game. There are many main characters who each have their own profile and business to go about. Players must decide if they will be friends or foe. From doctors like Even Niden to law keepers like Jon Cooper. 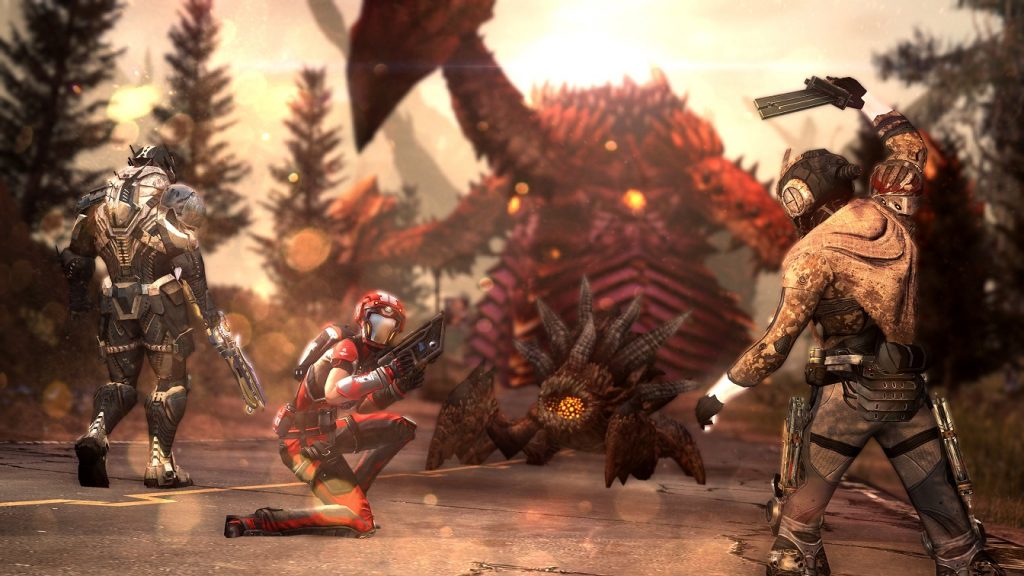 There is a story mode in Defiance 2050… well sort of… basically their are main missions which are directed by the famous scientist, Karl Von Bach who is the owner and CEO of Von Bach industries. He’s also the chief engineer in the weapons devision. These main missions will take players on a earth republic funded expedition to locate and collect a certain alien relic. Off course there are unknown forces at work here who aren’t going to make our search easy.

There are also side missions in Defiance 2050 which can consist of combat based missions like eliminating and holding of enemies to getting in and salvaging technology items etc. There are contracts which players can accept from some business owners who are chilling in the bay. Completing these contracts will increase your reputation with the owner resulting in reward which includes sweet stuff (not honey) like equipment and even weapons. There are also challenges too. These challenges are just there to test the players skills. Challenges are everywhere and players can earn medals and even aim to get their name on a global leader board.

A large open world massive multiplayer shooter game like Defiance 2050 has to have a ton of weapons. It does. Thanks to the alien technology and Voltans, crazier weapons have become available. So ark hunters must get their hands on weapons like the Spread rocket launchers, which rains death over a large area, Sub machine guns which are for close range combat, Sawed off shotguns because unlike the salty fans of Gears of war, Defiance 2050 understands that it’s a good weapon, Charged sniper rifles which deliver heavy damage from far away, Light machine guns for that all round favourite gun style more weapons. 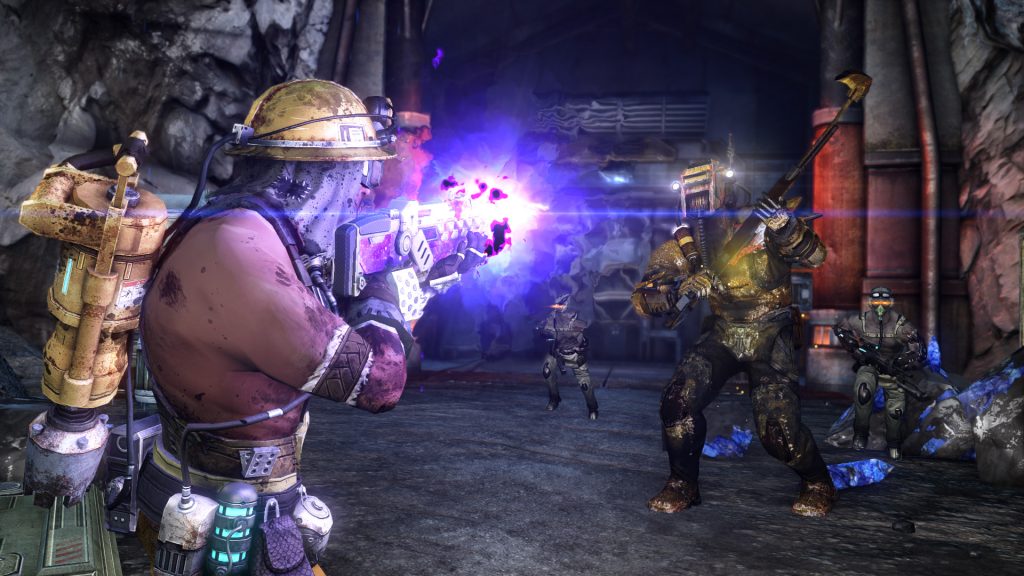 You thought the amount of weapons was a lot, wait to you hear about the enemies. There are a ton of enemies around and all of them require an attitude of shoot first, ask questions later. There are scrappers who were formed from scrap and salvaged technology who have shown signs of increased intelligence but still hostile. Hell bugs who are dangerous creatures that come from deep below the earths surface and who are coming for both Votans and humans alike. The volge are a world conquering species who have no allies, no mercy and do what they got to do. There strikes are as fast as they are dangerous. The afflicted who are victims of a plague and now from as mindless aberrations, dangerous ones with different forms and weaponry. Not your typical zombie. The Skrill who are basically large than normal glow bugs who have been experimented on to become a powerful, hungry dangerous specifies with natural explosives. There are even more enemy factions that players must watch out for.

We checked out some gameplay and it’s looking good so far. As a massive multiplayer shooter you’d expect many players running around, gunning enemies, collecting stuff and trying to survive. We are initially disappointed with how easy the game is. It’s almost like you don’t need to take cover. You are another person can just stand there and take out the enemy easily. Not sure why the players jump like they are master Chief from Halo, hovering in the air for a while. The environments are not as exciting as we thought. It comes off as sort of empty but we bet that’s not always how it is. The enemies better stand out clearly from each other and have different behaviour. Otherwise, everything looks good. There is a lot of potential in this game.

Overall Defiance 2050 looks good. We won’t say excellent though. The graphics and animations could be better but we like what they done with the world. We love how cooperative this game is, so grab your many friends and ravage the lands. The developers ‘Trion Worlds’ have done a good job with this game. We at X35 Earthwalker will have to keep an ear open for Defiance 2050 to hears what’s happening before we look for it. This doesn’t mean you shouldn’t check it out for yourself. Now Defiance 2050 may have a huge survival issue going on but the one thing without any issues is… the ‘Earth Walk!’