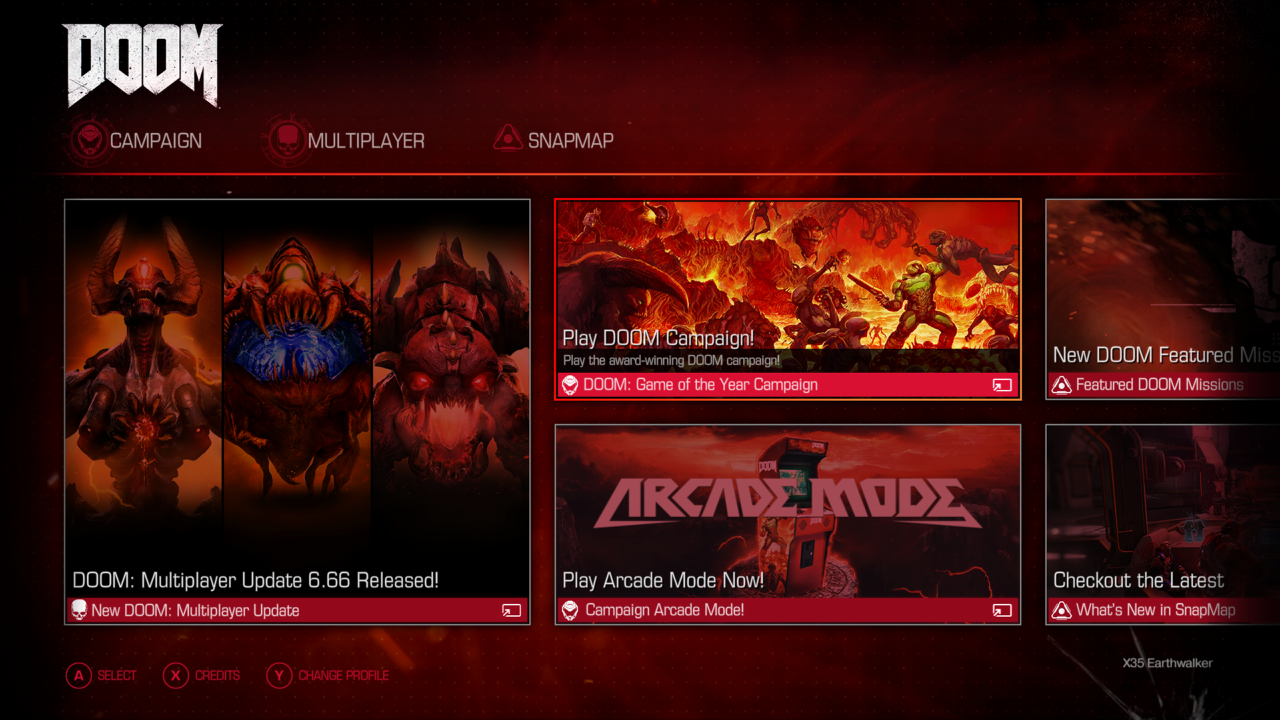 DOOM or what some call DOOM 4 had a lot of hype and for good reason. DOOM delivered and brought a game which follows the ways of Ultimate DOOM. It was about constantly moving to avoid numerous projectiles and attacks coming your way. DOOM did get an update and we at X35 Earthwalker believe that stepped the game up to another level. Let’s take a look.

The DOOM campaign story was a bit weak but DOOM never really had much of a story. Basically it was demons show up, so let’s kill them, then we got to hell to kill them, they come to earth, we kill them again, then they kill your rabbit and so you kill then once again but the action was done right. 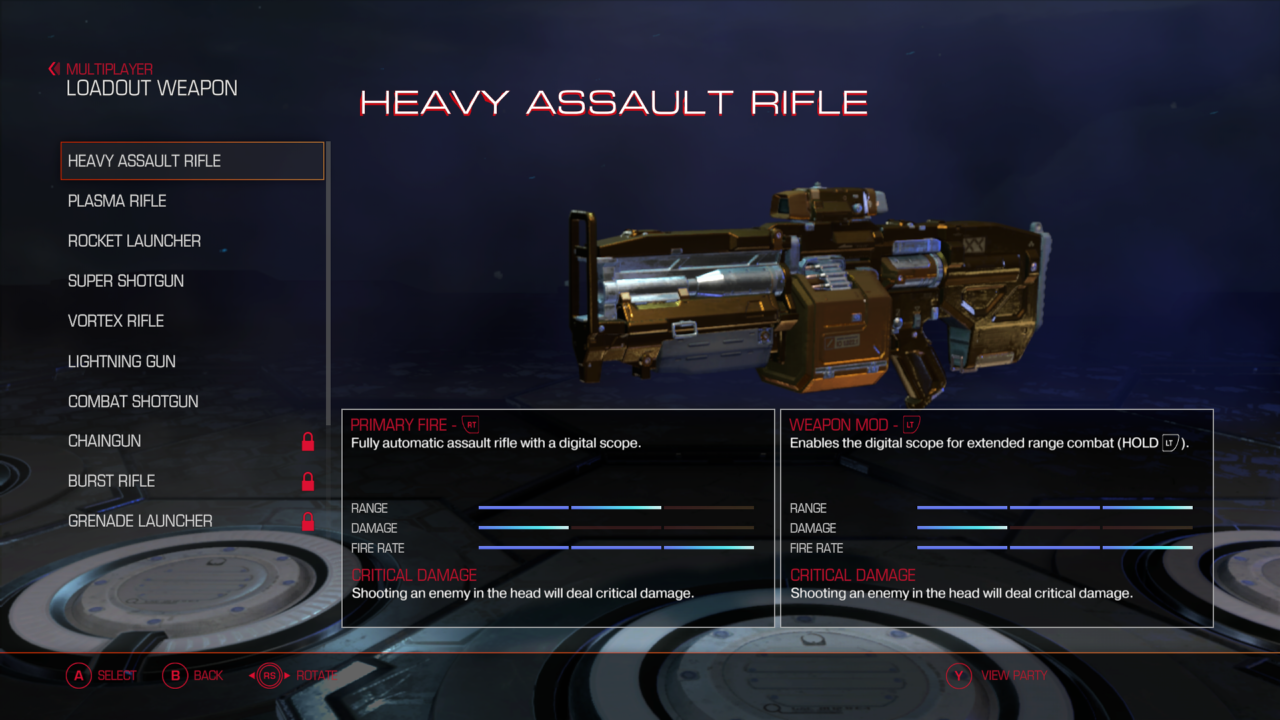 The main thing about the update was the changes to multiplayer and Snapmap. Multiplayer was how DOOM should be. it was fast, matches didn’t last forever, nowhere is safe, players dying everywhere and demons at times get involved wrecking havoc and striking fear. Now the weapons actually have graphs to show the stats of each weapon and their weapon mod. For example we can now see that the heavy assault rifle has low damage, medium range and high rate of fire but when you use the Heavy assault rifles weapon mod the range is increased. This makes things easier and makes more sense. A problem that DOOM had in multiplayer was the fact that the weapon balancing. Some weapons are clearly out classed by others and therefore no reason to use them. The Heavy assault rifle was one for example and so no one pretty much used it. The balancing though has been improved and now the heavy assault rifle is actually useful as long as you get the headshots. 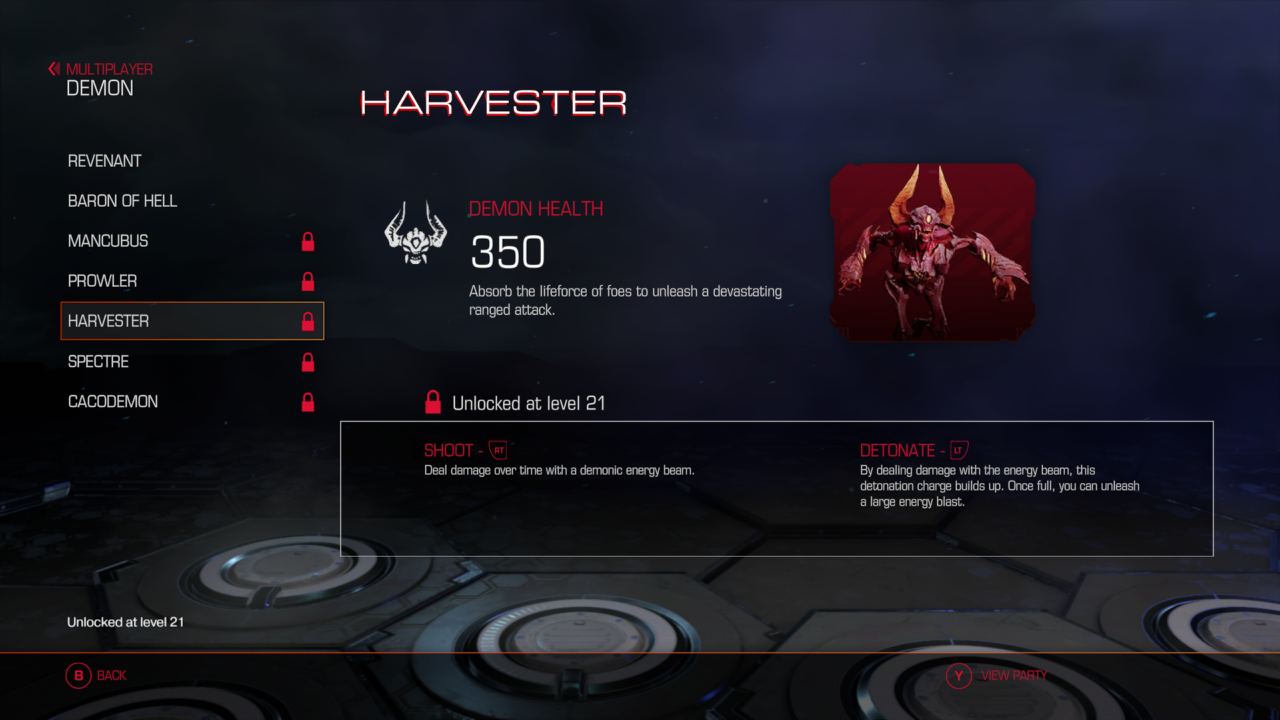 Now there are some new demons in DOOM as well which is always exciting to see. The demons can only come when there is a demon rune and the first player to grab it gets to become a demon. It’s actually kind of scary as the type of demon can change everything. For example if a mancubus shows up then every wise player will exit the area and stay away. if a Revenant shows up then the best thing to do is deal as much damage as fast as possible because it is faster than you and will kill you first. Now the new ones are: Harvester, spectre and Cacodemon. The harvester fires a beam which damage anything it hits and that charges up detonation which once full you can release a large energy blast. The Spectre is basically an invisible pinky demon so just simply run around the map and destroy unsuspecting players at great speed. The cacodemon just flies around, crushing players with it’s huge jaws and firing a blast at enemies for longer range combat. These new ones are great additions to the demon crew. Off course they it room for more in DOOM.

Now Snapmap is exactly as you remember it except that there are more levels in there and more spotlight  maps which are maps that are normally designed very well. They have story lines it’s clear that pretty much everything was done intentionally and planned. So if you liked Snapmap then off course you will love it more now as it basically has more of everything. X35 Earthwalker himself believes that Snapmap is the best thing about DOOM. It is so worth playing as there is content for days.

Overall the update just brought good stuff to DOOM. The game has gotten better and it’s even more worth checking out if you haven’t already. We will be playing DOOM more often now. Now an update is always great to have but there’s one thing that doesn’t need an update and that’s… the ‘Earth Walk!’