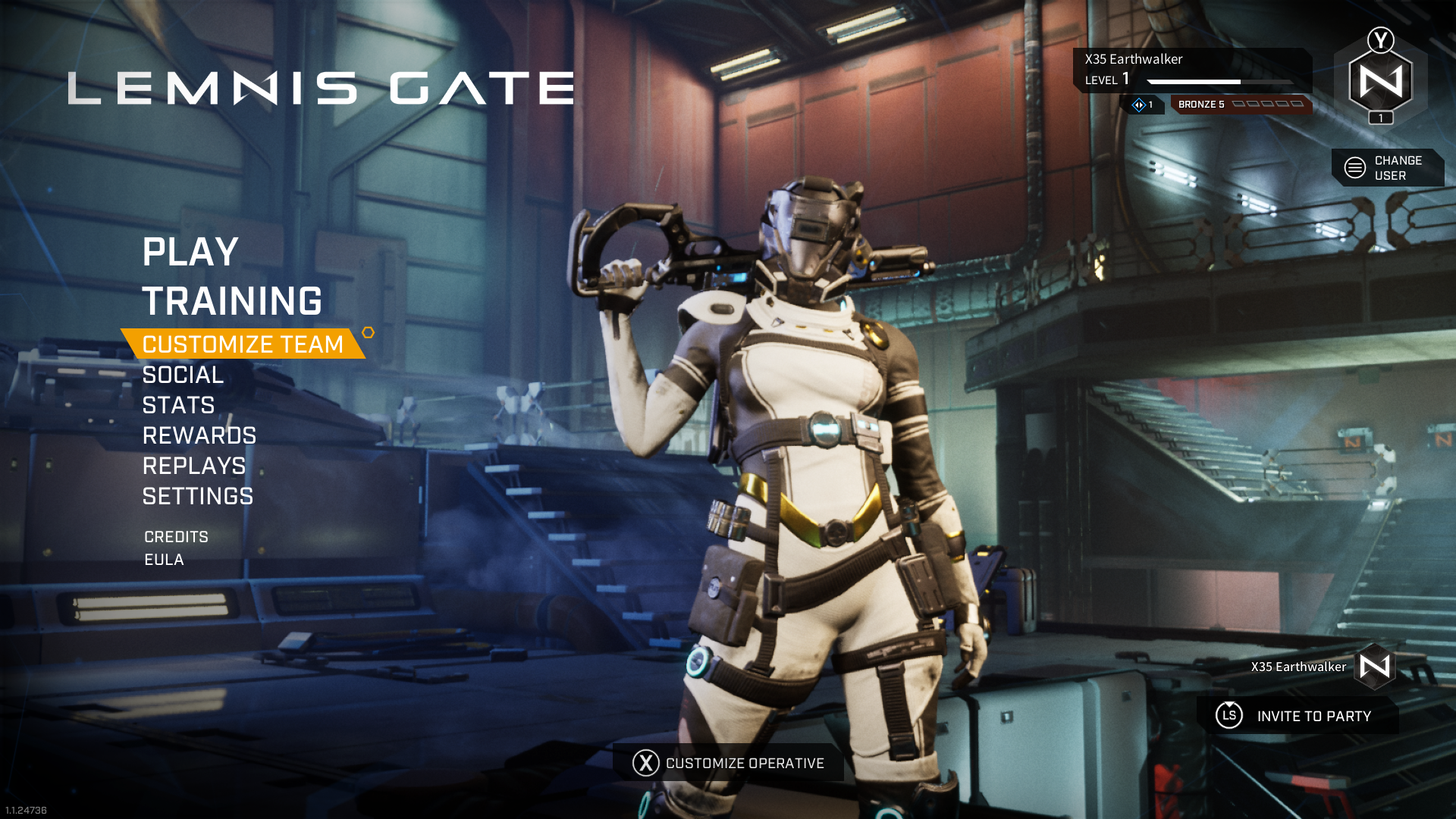 Welcome to another X35 Earthwalker quick review. Lemnis Gate is an excellent game. We will say that right away. Lemnis Gate was developed by ‘Ratloop games’. This game is available on Xbox Series X (off course), PS5 and PC. X35 Earthwalker has played this game for a quite a bit and even did a livestream on it. Here’s what we think of Lemnis Gate so far. Take a look.

In case you don’t know what Lemnis Gate is, most likely because you don’t operate in the best gaming circles like we do, then read our first blog post on the game. Regardless we will break it down simply. It’s a first person shooter game but heavy on the tactical side. The main mode is turn based first person shooting. There’s a small map with objectives like collect the orbs and bring it back to your spawn. You move first and run out to get an orb and bring it back. Then your opponent on their turn will try to get an orb too. The one with the most wins. Except it’s way deeper than that. 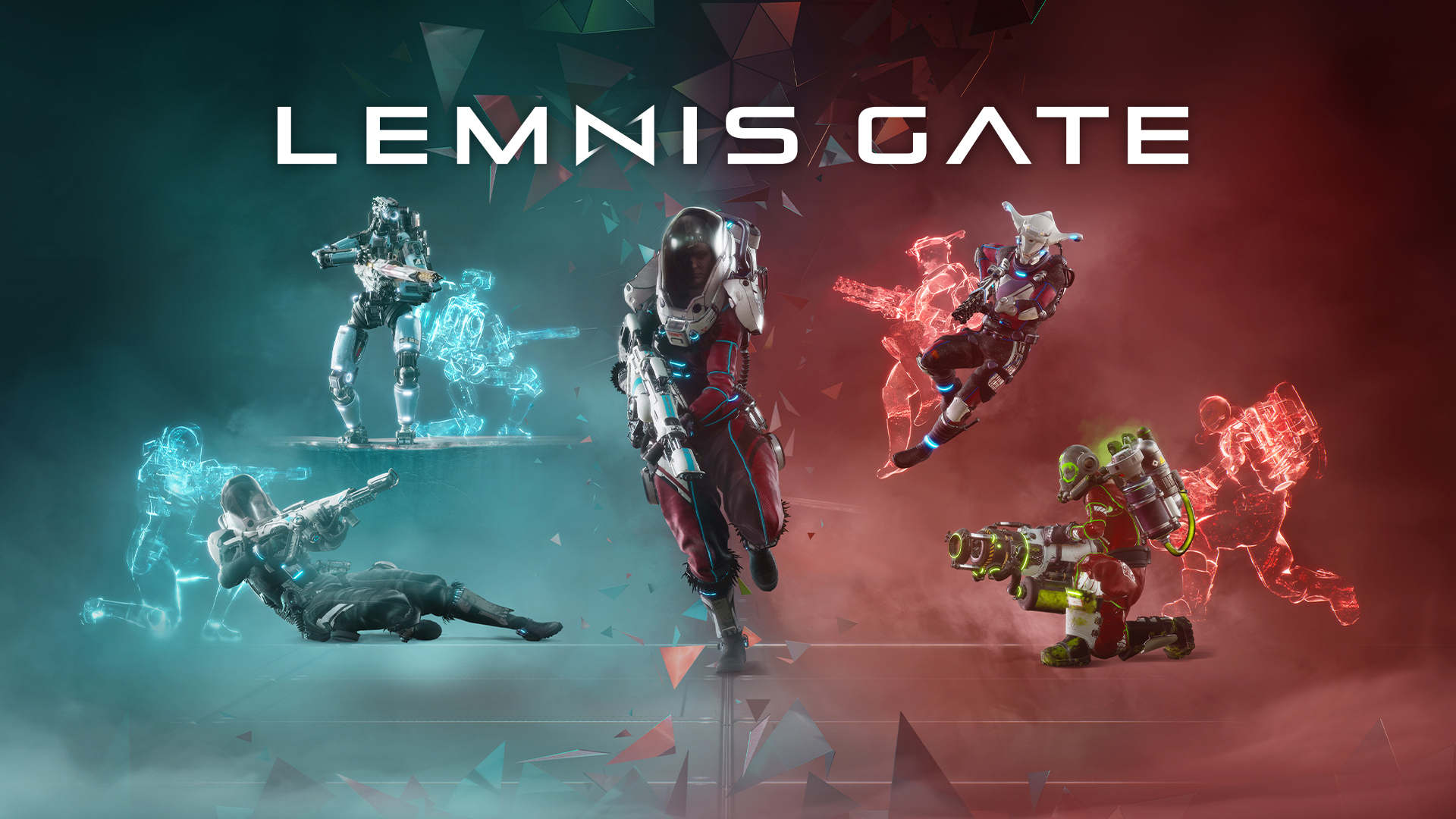 You play with the past, present and future. This game can get mind bending real fast. With Halo, you just need to know the map well and have good aim. that’s it. For Gears of War you need to wallbonce and aim well with the Gnasher shotgun. Those games are fun but straight forward. Lemnis Gate forces players to use far more of their brain. They tried something unique and made it work. So remember the example we gave earlier? Well on your opponents turn they will try to kill your operative who goes to grab the orb and instead take it for themselves, preventing you from getting it. You can’t go back to undo that, as it’s now in the past but you could instead use another operative to go in fast and kill the operative your opponent used to kill your first one. With the opponents one gone, your first one doesn’t die and continues to grab the orb and get back to the spawn to score. Do you get it now? Don’t worry, we know it’s easier to see than read to understand. We will put our gameplay video down below.

You get it now. That’s why Lemnis Gate certainly isn’t for everyone. It’s for higher IQ players due to how much thinking and problem identifying and solving it takes to be real good at this game. This doesn’t mean your average player can’t play. They can but they must know what they are getting themselves into. The typical learn as you play and face better opponents os real and applies here. some are going to play and loose for a while before really getting the hang of it which is okay. While others will do good almost straight away while only X35 Earthwalker himself is super intelligent and naturally talented that he dominates and wins already. Seriously though, X35 Earthwalker right now is undefeated. Now about getting good at the game, you can literally play against yourself for practice. Control both player one and two like how a real match would go. You can see if you can beat yourself and try things to see what actually works or not. Very smart move of the developers to allow you a training session against yourself. Use it players, and learn some tricks.

The game looks excellent. The levels are off a good variety in design from a jungle like area to a moon base like place to a waste land with funky rocks and more. We like the different operatives. Really like them. Let’s talk about them. There’s seven in total: Vendetta, Deathblow, Toxin, Rush, Karl, Kapitan and Striker. Each has their own Gun and special ability. Vendetta has a shotgun and her ability is to set up automatic turrets to fire at enemies in range. Deathblow has a rocket launcher and can set mines. Toxin fires toxic balls which hit and covers surfaces in damaging poison puddles, her ability is a teleport. Rush dual wields sub machine guns and can dash fast on both land and air. Karl has a continuous laser beam and can place defensive shields. Kapitan has a machine gun and can throw a grenade. Striker has a sniper rifle and can slow down time. We already have our favourites based on design alone. 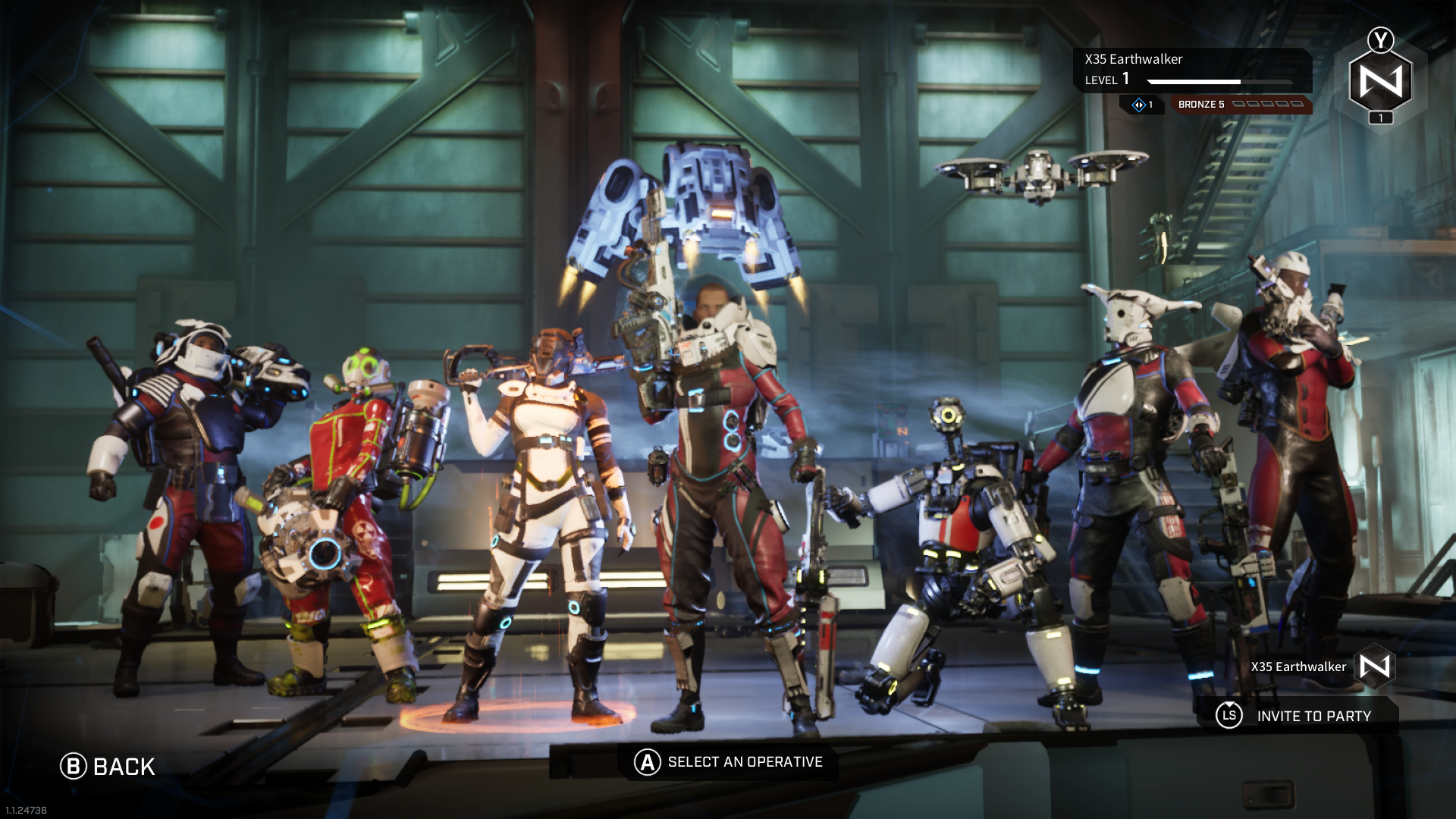 Let’s talk about the design of these characters. We really like the designs here. Deathblow sounds awesome. He sounds like a serious veteran bounty hunter or that one dude who you don’t want to mess with. Toxin is a woman but at first look she looks like a man thanks to her big hazmat like suit which makes her immune to toxics. Her voice is amazing. Loved it instantly. Kapitan looks like a hardened woman. someone who has gone through either rough training or moved into this no nonsense attitude. She won’t be playing Halo Infinite with the others. Karl reminds us of Pathfinder from Apex Legends. A high tech talking robot with some whitty puns. Makes sense for a robot. Rush stands out the most. This guy definitely has a mighty accent. Strong Caribbean accent which works well with him. Jamaicans are the fastest people (just ask the Olympics especially in 100m sprint) and yet Rush is the fastest character with an ability based on speed. He has jokes and super confident. Reminds us of a certain Jamaican friend we know. Cool dude, just like Rush. Striker has the least going on. A confident use with a mask who likes a clean kill. Nothing much stand out with him. Lastly Vendetta who might be our favourite. We like Vendetta’s design and her attitude She is an example of finally game developer are putting women in their games with different body types. It’s about time! Bless Unleashed did it and we praised them for it. So many female characters have the shape of Kapitan. Vendetta is heavier in her lower half while top talk was more standard. She stands out instantly and for good reason. We want more variety in character body designs. The Lemnis Gate cast is excellent.

Lemnis Gate gets real deep when it come to tactics. Think about it. When you know someone is sprinting straight for an objective like the orbs. You don’t even need to kill their operative, all you have to do is just grab the orb before they do and run with it. The best players always try to find the simplest way of handling a problem. For example, if you know an operative will get sniped by striker then all you have to do is place a shield on your operative with Karl. The shield will save their life. Just use the shield, you don’t need to always kill the enemy. Always be careful of events that take place in the past like flying rockets from Deathblow. Your next operative who runs out there might get struck by a random rocket and waste your turn. You also need to know which operative might be a good counter for the other. Advanced stuff. We might make a G-blog post on that one time. Advanced tricks and some tips. Just remember to focus and pay attention to what’s going on. Especially in the later rounds where you have 6 operatives running around doing their thing at the same time. 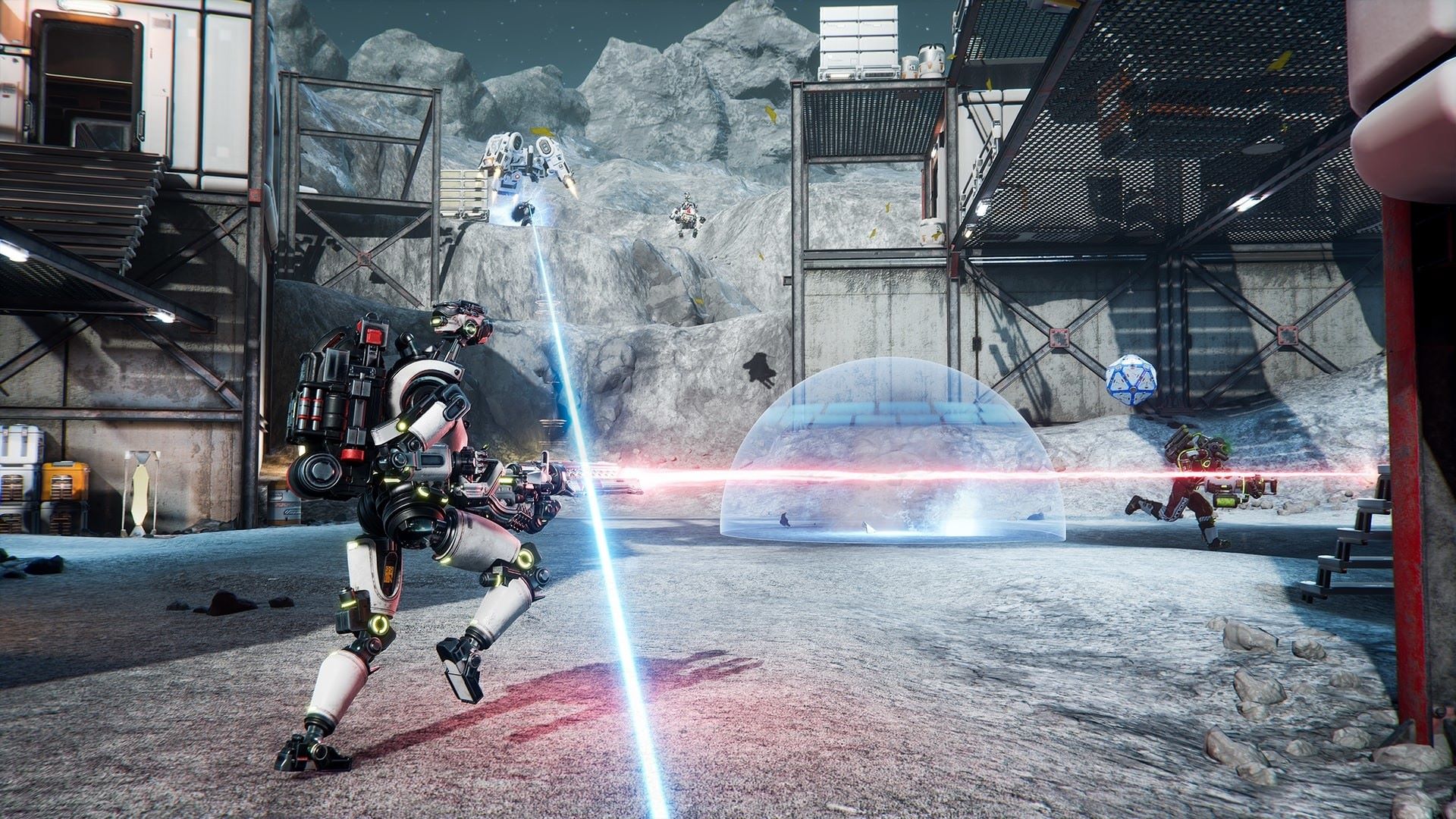 Overall we can proudly say that Lemnis Gate is awesome. It’s very difficult as you have seen and read. Take a ton of thinking, especially to outplay and outsmart your opponent who is also clever. X35 Earthwalker has faced some experienced players already and still won every match. It’s on the Xbox GamePass so try it out for yourself. Now Lemnis Gate may operate in the past, present and future but that’s still many abilities below… the ‘Earth Walk!’