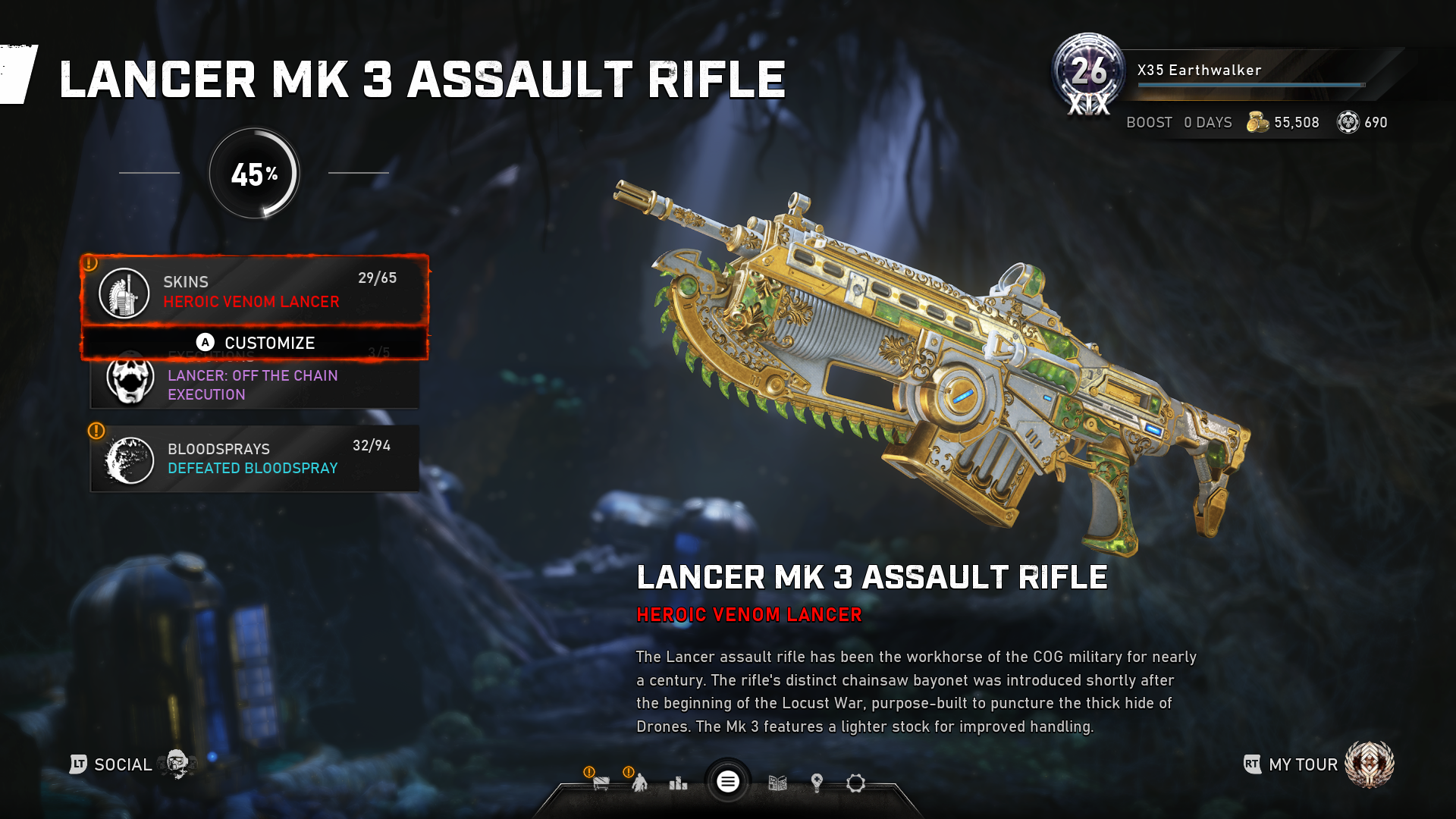 Gears 5 is an excellent game overall but due to decisions made by the developers ‘The Coalition’ concerning versus mode, they have damaged the game a lot which has resulted in bad statistics. Horde is fun, escape is fun, campaign is fun but versus sucks. One big change to verses that has ruined things in matches is what they did to the Lancer. Let’s take a look.

Look at our X35 Earthwalker video above. You see how weak it is. You get away with running out in the open for that long and survive the lancer. That wouldn’t happen. The accuracy was good as we landed our shots and he still didn’t go down. We have seen people run through lancer fire, reach the shooter and one shot them with the gnasher, which is stupid. Gears of War is a cover shooter game. Therefore players should get punished for running out in the open carelessly. Yes we know the game’s multiplayer meta became the gnasher shotgun but that means the game is cover shooter while the versus is not. That’s a fail. We have seen multiple layers surviving a hail of bullets. Not good. What’s far more frustrating is when you finally down someone with the lancer or whatever and then you fire at them with the Lancer to finish them of as they try to crawl away. Sad thing is that the Lancer takes forever to kill downed enemies in versus. We have seen this many times. down someone trying to run, you down them finally and then you try to finish them off and they don’t die. You have to reload and by the time you finish reloading, they already crawled behind cover. That’s so stupid and the developers haven’t corrected that. How are you almost as tough as a healthy character, while crawling.

The polite people in the comment section informed us that they also removed the damage buff you get from a perfect active reload. This was in every Gears of War game. Just Gears 5 that doesn’t have it semi-lately. Yet the Gnasher keeps it’s buffs from the reloads. This means that Lancer is even weaker than before. In Gears of War 3, the Lancer is a strong weapon. When you get that sweet reload it became stronger than the powerful retro lancer. Compare Gears of War 3 Lamnncer to Gears 5 Lancer. Heck, compare Gears 5 Lancer to Gears of War Judgement’s Lancer. In Judgement the Lancer is very good and very fair. Not the strongest rifle as well. We even saw a reduction to the stopping power of the Lancer in Gears 5. Once again, another nerf. This allows shotgun users to rush you, push through the bullets and still kill you. Low damage, no bonus from the perfect active reloads  and weak stopping power. This is a terrible combination. Multiple time we have seen where the Lancer fails and it’s frustrating. Even during an X35 Earthwalker Gears 5 livestream everyone saw that the Lancer once again was useless. People stated that they don’t bother with it anymore.

There are a few people, conveniently they are the Gnasher only user players, who say the Lancer is how it should be. Well congratulations! You guys got what you wanted and guess what? Gears 5 has the lowest numbers of players. Gears 5 is getting smaller and smaller. Their numbers are terrible. New players try, hate it, get killed by Gnasher losers who want montage clips for their youtube channel over and over again and then leave and never come back. Old players are leaving and even veterans of the series like X35 Earthwalker don’t bother with versus as much at all anymore. Gears 5 sadly isn’t doing well. Many forum pages of people complaining about the game and the developers aren’t listening. Making the icon weapon of the game trash is a terrible idea. There’s more to say but we won’t bother. So instead watch something really cool like the video below.

Overall… the Lancer sucks. The Lancer is garbage. The developers ‘The coalition’ has made some very bad decisions. We will definitely be avoiding versus mode a whole lot more. Versus mode isn’t fun. Let’s hope things change but we stopped caring some time ago. There’s tons of other good games to play. Now the Lancer in Gears 5 is garbage and it’s not good enough for… the ‘Earth Walk!’