The Sinking City is a new action adventure game developed by ‘Frogwares‘ and published by ‘Bigben Interactive‘. The Sinking City is coming out the 21st of March on the Xbox One, PS4 and PC. This game has something deep going on and it will come to the surface soon (se what we did there?). Let’s take a look.

The Sinking City is set in the United States in 1920s. Quite a suspicious time if you ask us. Players control an investigator named Charles W Reed. Eventually you arrive in Oakmont, Massachusetts. Before you know it, you are practically called to investigate the city. Not just any city but one that is suffering from mysterious floods. These floods will get rid of the city. It’s up to the player and Charles W Reed to figure out what’s going on. 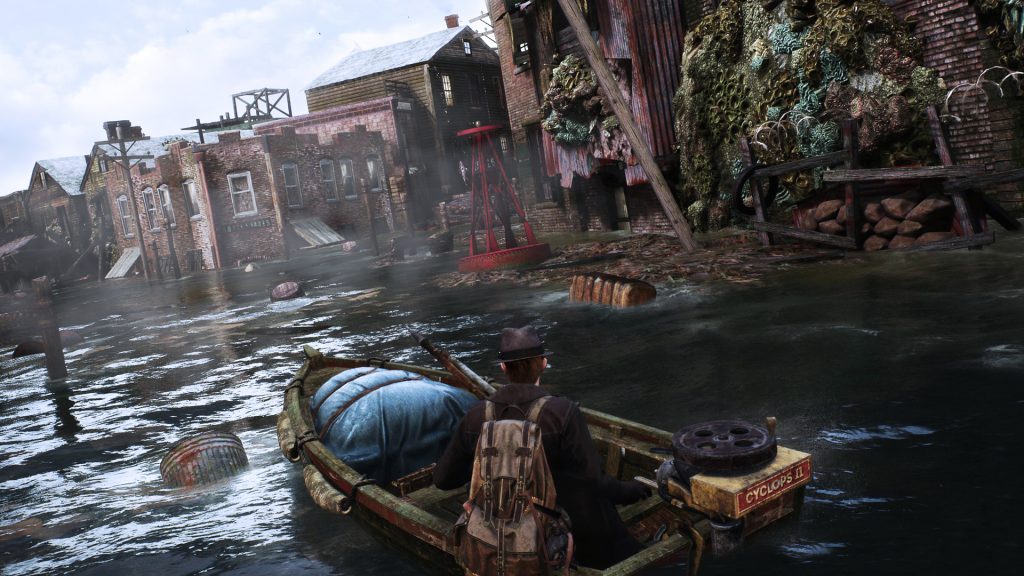 Now there has been rumours about a sort of darkness that has not only kept the city under it’s control but also effected the minds of the people who live in this city. It might just corrupt your mind as well. So be careful. By the way, The Sinking City is also an open world that was inspired by the universe of H.P. Lovecraft. So fans will have an advantage of whats going on including the lore.

So what can you expect in The Sinking City? This whole world is pretty much fully explorable. So go down the streets and in buildings on foot, travel from port to port and explore the waters with a boat, or even go under water and see what’s happening with a diving suit. Your characters mental health is a factor in the game, so possibly like Visage, some events or activities could possibly effect what you see or your performance.

Now it’s been made clear that there are monsters in this world. The Sinking City isn’t the safest place on earth (in case you haven’t realised yet). There are dangerous monsters that will destroy you if you aren’t prepared for them. Some look like spiders that move pretty fast, while others are more like medium sized kraken monsters while others are massive king king sized krakens with tentacles and everything. It’s most likely called a cthulhu as they were introduced in the H.P. Lovecraft books, specifically the ‘call of cthulhu‘. Also there are weapons. Lots of weapons and thank goodness as they are needed. The weapons are from the 1920s so don’t be expecting a M16A2 assault rifle. Expect the Thompson and it’s automatic fire.

We checked out some gameplay and it’s a bit more than we expected actually. The whole world in this game is quite creative. The setting is good too. A number of people have an issue with water, throw in a mystery and water based monsters and you have something quite good. Also each case you faced can be  solved in different ways and there are a number of endings too so players who enjoy the game can replay The Sinking City. So as we said, this game is quite deep. Your character can also do strange things like see and hear things from the past, which is like the ultimate ability for a detective or investigator. There are more abilities too.

Overall The Sinking City looks like a good game. The graphics adequate good, the sounds are better. The environment and world look sort of bland but we know improvements are coming. Looking forward to more information concerning the weapons in this game. The developers ‘Frogwares’ did a good job with this game. We at X35 Earthwalker are not looking forward to this game. It looks good but we will wait until we see something real interesting. Now The Sinking City may have water and monsters but even those combined are nothing compared too… the ‘Earth Walk!’