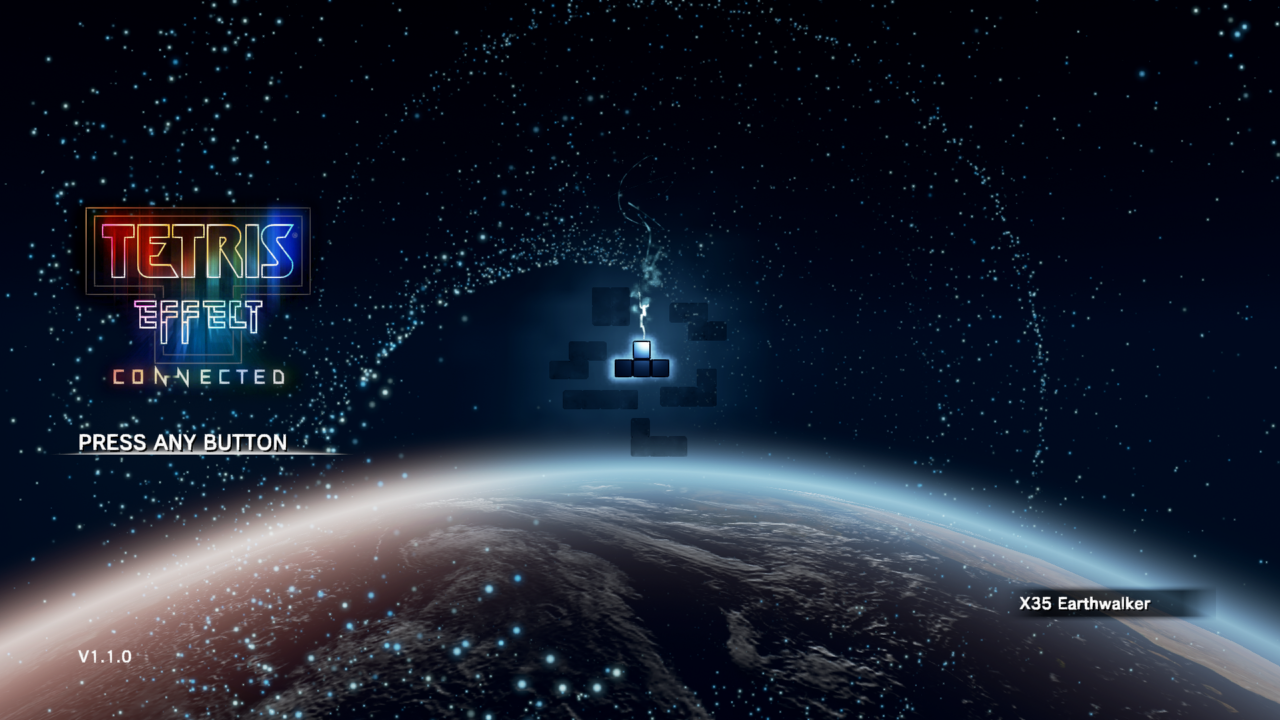 Tetris Effect: Connected is described as a tile matching puzzle game. Simply put… it’s Tetris. You know what it is. This game is fantastic! Sure it’s Tetris, but it’e not Tetris and we will get into that later. We are so glad we played this game and it surprised us severely. Don’t let the fact that it’s a tetris game throw you off. Let’s take a look. 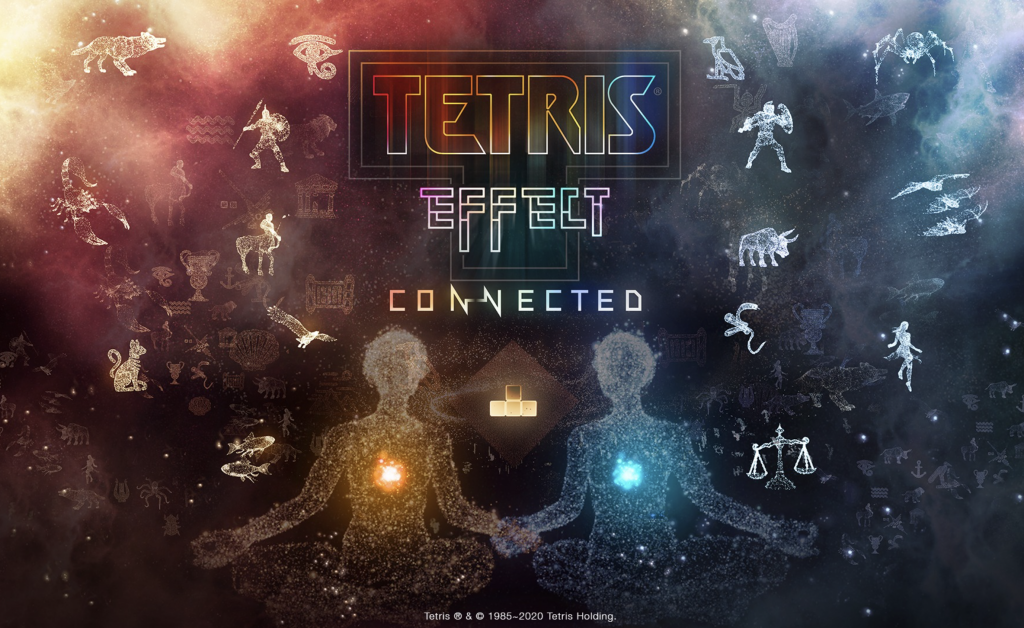 The main mode which is the campaign called ‘Journey Mode’. Here you go through a series of levels where you play Tetris but the main goal is to clear lines. There are three difficulties really as the fourth is practice mode which doesn’t even include all the levels, has no game over and is the slowest speed. In Normal difficulty you must clear 36 lines, beginner is 30 while hard is 48. Also the higher difficulties are overall have faster Tetriminos (the falling blocks) falling speed. For example the first level ‘The Deep’ ca rise up to a fall speed of 3 while in Hard it goes up to 8. The problem we have with Tetris Effect: Connected is that the jump from normal to hard is too big but if you reach the later levels in normal difficulty you would be use to higher speeds than the early hard mode levels anyway but still…. too big of a gap. 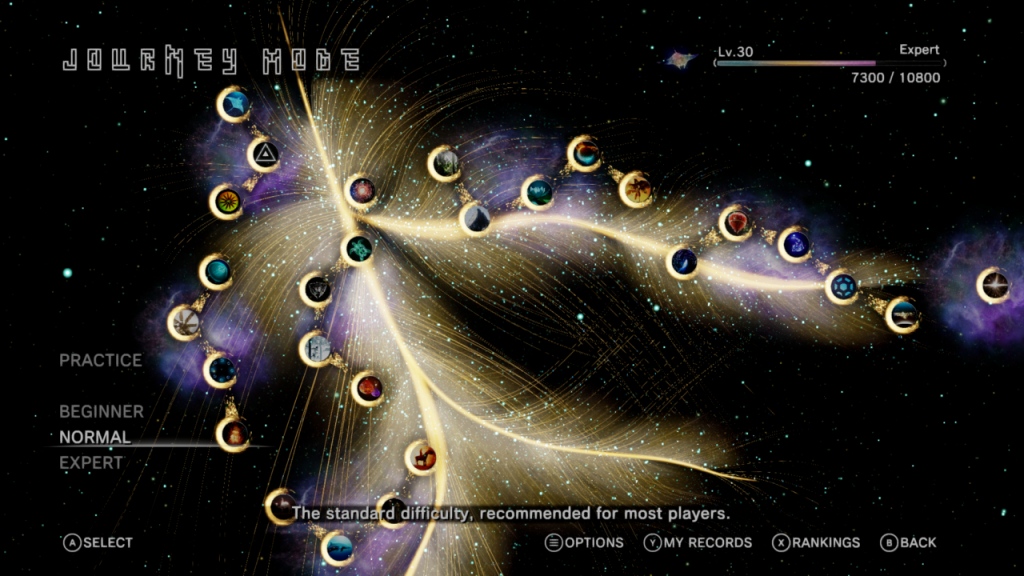 The levels in the journey mode are beautiful and vary heavily from each other. You have sea level types but they vary for example ‘The Deep’ has manta rays but concludes with a massive whale. This level is one of the best ways to start of the game. It’s a beautiful display and you see the movement around as you progress through the Level. Mermaid cove has mermaids. Turtle dreams has turtles. There’s also Jelly fish Cgorus and Dolphin Surf which has a immensely bright moment in the level where you come to the surface with the dolphins. Epic stuff. Some levels come with a song with lyrics while others is just music but for the most part the music is very good and we like the songs. The song in balloon high is the best though. It’s relaxing or gets you hyped with the action, making things intense. The big boss level is metamorphosis which has 90 lines to clear on Normal difficulty. It’s a huge battle where the Tetriminos will fall at high speeds which are impossible to work with if you are new to the game. More on that later. Journey mode is awesome, very challenging and you’ll spend good time here training.

The next big mode is off course Multiplayer which what makes Tetris Effect: Connected a different game from Tetris Effect. Some idiot online wanted to spend his day arguing with X35 Earthwalker about that. What a loser. Hopefully he gets a life. Multiplayer is where the action is at after training through Journey mode. Here you can find all the true new stuff. We do recommend players go through the tutorial for helpful tips as there are tricks and certain aspects of the modes you need to be aware of in order to do good. Once you enter multiplayer you see a massive pyramid but at it’s base is the top reflected to make a full shape. Just imagine a pyramid on top of a pyramid but connected at the base. It’s in the center of this galaxy and players names are floating around this massive structure and in the Milky Way looking galaxy. You can select your guardian avatar which is the different images and shapes you unlock through playing all through Tetris Effect Connected. For example if you level up you can unlock the Moon, Nabla and Sun through playing online matches and you get a bonus if you win off course. You can unlock others through playing specific modes or a certain number of matches etc. They are cool and the one you select becomes like your symbol. Cosmetic stuff. There’s 84 in total. There’s orbit mode which allows the player to fly around the galaxy and view players avatars, their names and see the pyramid from different angles. There are three types of multiplayer: Ranked, Friend and Local. Ranked is for points and against random Tetris Effect: Connected players around the world. Friend is a private match where you can invite friends. Local is local couch play. Bring a friend over, family or beat your spouse at Tetris and damage your marriage. 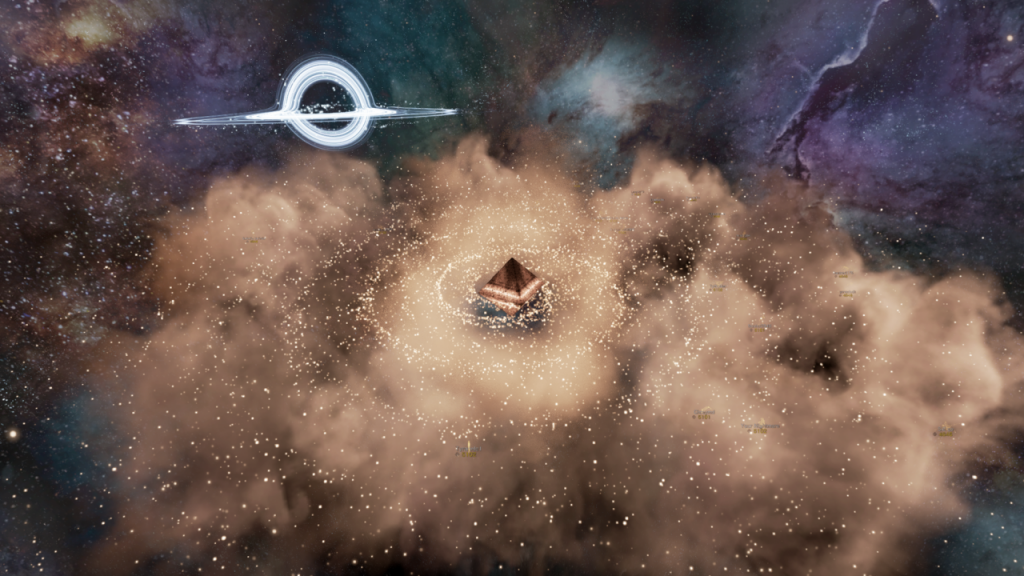 The multiplayer modes are: Connected, zone battle, Score attack and Classic score attack. Classic score attack is where you face an opponent 1v1 to see who gets the highest score. Old school classic Tetris. Score attack is the same but it’s all modern Tetris though. Now here’s the good stuff. zone battle is about crushing your foe. Not score. It’s whoever loses first. First to two. Cause your opponent’s side to fill up to the top. As you clear lines in fancy ways you send trash to your opponents side which builds up forcing them higher to the top of their screen. So clearing doubles, triples, quads, clearing in combos, T-spin or whatever it is called all contributes. Single line clears don’t contribute at all. Your best tool is the zone mechanic. This mechanic is new to Tetris Effect: Connected (It was also in the inferior Tetris Effect). Basically you stop time and have limited time to clear lines and each cleared line goes straight to the bottom of your screen. Can save your life but the best way to score points. This zone if done right can completely destroy your opponents one shot. There’s ways to win but you need to know what you should and shouldn’t be doing. More experienced players than X35 Earthwalker has lost to him because X35 knew what to do while they didn’t.

The last mode is Connected and this is truly awesome. You and two others face actual bosses who are playing Tetris just like you. It’s 3v1. The bosses are the stupid zodiac signs. They are in groups of three and you face each one one right after the other. For example on normal difficulty you face: cancer, libra and scorpio. Each boss has their own abilities which are designed to mess up the players. For example they might make your next two falling blocks super large taking up so much space. Cause your Tetriminos to fall extremely fast. Rise up your screen, drop in explosive blocks, rotate your field etc. Some abilities are more dangerous than others clearly. The three need to keep clearing lines like in zone battle to contribute to the meter. When it’s filled all three of your fields combine into one big one and you need to create as many lines as possible. The more you do the stronger your combined attack against the boss to force them to the top of the screen. Once defeated the next comes after a quick statistics break. There’s more after hard difficulty. They won’t go down easy. 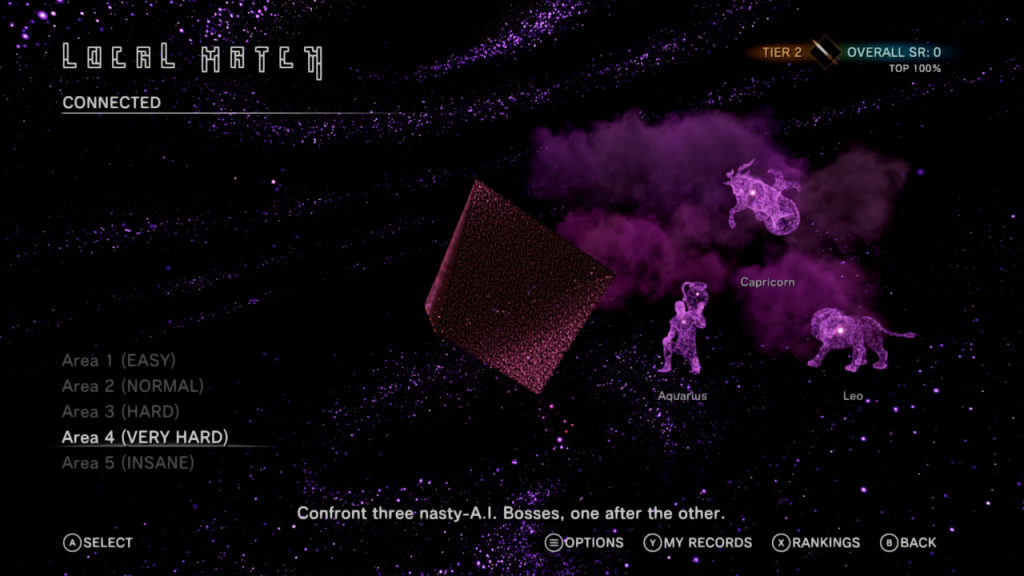 Lastly is Effect mode where you can try out what looks like community made challenges. They are set though and mx things up. Some have conditions, others are about scoring in a time limit. It’s different from journey and multiplayer and brings in some adventurous stuff. There’s even one where you have to clear 40 lines as fast as possible. Simply put there’s lots to do here. Another thing we wanted to talk about tis that Tetris Effect: Connected trains you. It actually forces you to think faster and be faster. When you first start playing Journey mode you really struggle when the speed reaches 4. Higher speeds like 6 becomes too much and you complain at how fast it is.As you play a bit more and get use to the shapes you find yourself naturally able to handle speed 6 and up to 8. When you first encounter a level with a ruthless speed of 10 you get shocked and fail, again complaining that it’s too fast, which it is. Then over time you find yourself easily handling speed 10. We can now do speed 14 and 16 if we have enough space and actually plan and decide where that piece should go within the practically ‘no time’ that we have to think. This game forces you to be fast. You stop complaining ad say bring it on. You take on those speeds and find yourself handling it. We got faster and better. Since X35 Earthwalker is the best, smartest and wisest gamer of all time he grew in skill way faster than other players and these speeds are very doable for him. Off course we aren’t dedicating our lives to be the Tetris pro players as we have a bigger life and much more going on but for how much we do p[lay it, we are easily masters who are getting better.

There isn’t really a negative to Tetris Effect: Connected except for the big gap in difficulty between Normal and hard. Other from that, there’s no problems. It’s Tetris and stays as Tetris. Thus game has lots to do. If you want to get serious you can with effect mode. If you want a challenge you can do journey mode on normal difficulty and higher. If you want to get competitive with others you can with multiplayer like zone battle. If you want to relax there’s relaxed modes in effect mode and there’s theatre mode where you can just watch the stages you play in journey mode, control the transition and listen to the music. Literally use Tetris Effect: Connected as your music player. Talk about a versatile game. Unpopular opinion and PlayStation fanboys get mad when wee say this but Tetris Effect: Connected is a better game than Demon’s souls remastered and spider man: Miles Morales. We aren’t joking. If you judged them for what they are, Tetris Effect: Connected is a better game. Don’t make the mistakes simple minded people make by assuming that this games boring because it’s Tetris and there’s no guns, giant axes, huge monsters and death. This game is fantastic. Very hard and unforgiving but fantastic. 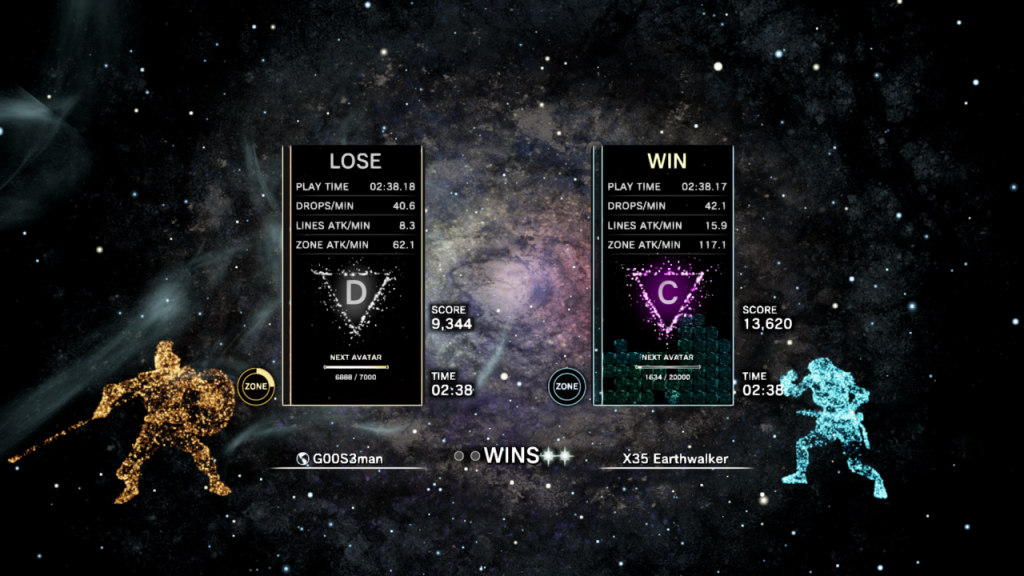 Overall Tetris Effect: Connected is an awesome game. One of the best games of 2020 easily and worth playing even now. The graphics are amazing, the particle effects are the second best we have ever seen so far. It would all look better on an Xbox Series X (we currently don’t have the next gen console). So many colours, great music with variety, excellent effects, multiple game modes, boss battles which ascends Tetris as something complete new. There’s local play up to three players. Tetris Effect: Connected is a multiplayer game with many things available. We are glad we gave this game a chance. We would give Tetris Effect: Connected a 10/10. A perfect game. There’s isn’t really anything bad about it except one level where the fireworks effect you get as you do a big move, it causes a lag that does mess you up but that’s the only real negative. Everything else is great. It’s available on the Xbox game pass so you can even get this game for free and play the whole thing. There isn’t much to say as it’s Tetris at the end of the day. It’s kind of hard to mess up Tetris. Now Tetris Effect: Connected may be considered a perfect game but it’s filled with flaws when compared too… the ‘Earth Walk!’