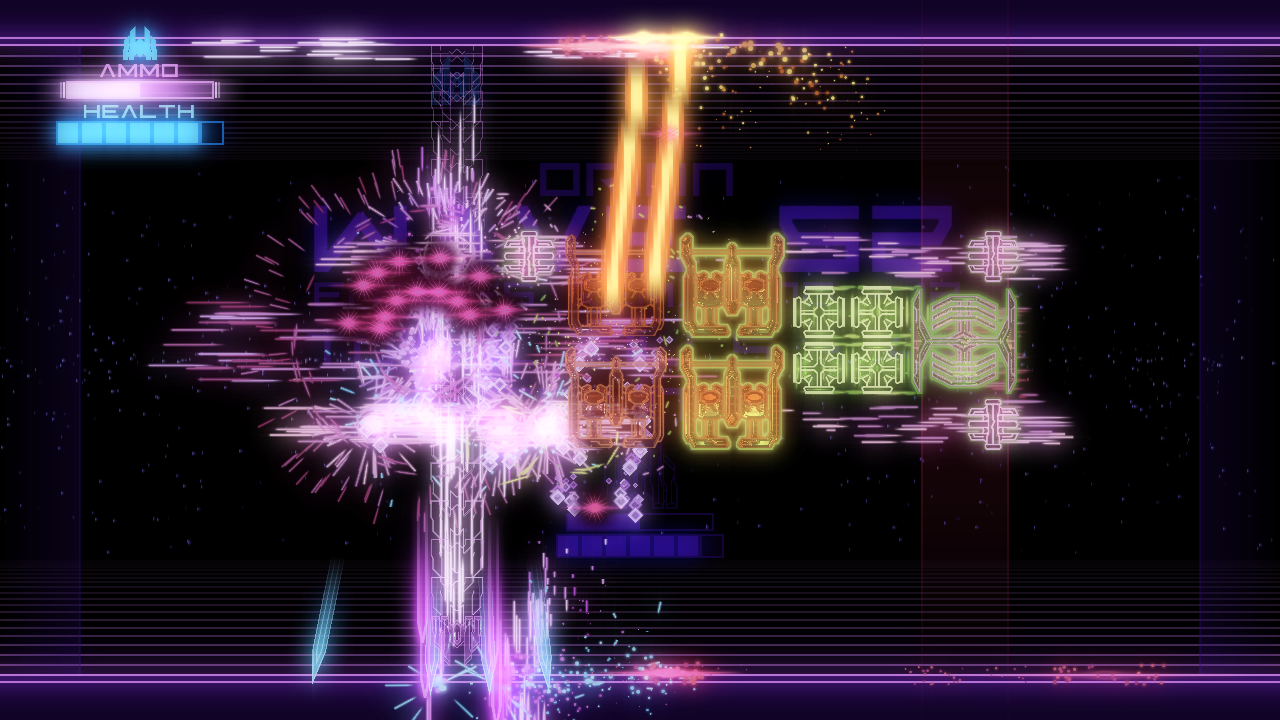 Radian games ‘Crossfire 2’ is one of those games that are awesome and made excellently but never got the love it deserved. I believe the name of the game got changed to ‘Super Crossfire 2’. X35 Earthwalker played this game way back on his Xbox 360. It’s such a shame that not as many gamers as you think had this game.

Straight from the title screen, you just know that this game has got some tunes. The beat is there and it gives the impression that the game has got some action to it. Thankfully it does. Seriously, you have to listen to that music. This game isn’t that deep and complex. It’s actually quite simple with a few game modes: Conquest, Conquest plus and Score attack. Conquest is the main story where you take on 60 waves across 3 different planets. There is a check point every 10 waves but you can heal and upgrade every two waves. Score attack is where you take on 30 repeated levels but they get increasingly harder and you can heal and upgrade every ten levels. Conquest plus is where things get real crazy. Here you will go through the same as Conquest except harder. Much harder.

Crossfire 2 is all about watching everything that’s happening on the screen and those reflexes. If you can’t do both then you will have a hard and time and forget about Conquest plus. You control a small ship and you must blast away the aliens, space invaders style, and stay alive. The game takes things to the next level with your special ability to jump between the top and bottom of the screen. This should be done to avoid bullets or get behind aliens to shoot them in a weak spot or other to force some aliens to direct their attention. The aliens are pretty much always firing and the different types of aliens being there all at once is where all the difficulty comes from. The orange/red pointed alien can fire in the direction it faces. The purple ones that have three segments poking out of it don’t need to face a direction as they can fire both up and down. Also if you jump then they reappear in a different spot. The almost square alien with a large central eye shows his targeting laser and then like a second later fires a dangerous beam exactly where that laser is. There are aliens that makes surrounding aliens invulnerable, others project a filed that if you are in, you can’t jump. There are aliens that explode upon death and release many dangerous projectiles which can be hard to dodge. The worse part is that there are also bigger versions of some aliens who have more health and more dangerous.

When you get to the upgrades screen you instantly get your health replenished. Here you can also spend upgrade points to improve your ship which is something that you need to do. There are upgrades that affect your: ship, shots and superfire. It’s up to you to decide what you need to focus on as you get 3 points every 2 waves so you have to decide what you need now. Prioritise. For example you may decide to increase your ships health, speed and power of your shots making you a powerful solid ship. Or you may focus on increasing fire rate, speed of bullets and spread angle to make hitting the aliens easier than ever. It’s up to you. X35 Earthwalker himself always prioritised spread angle and number of shots first over everything else. He bothers with ship health much later as he believes, if you are good then you won’t get hit that much therefore not requiring increased health yet. See what works best for you though.

There are three difficulties in Crossfire 2: Trainee, hotshot and ace. We seriously don’t believe playing the first two modes are worth it. It’s too easy. Play through Conquest on Ace as it will prepare you for Conquest plus. Conquest plus is so hard that on one play through of it. We almost lost as we had one life left and just about beat it but that’s the thing about Crossfire 2 it can easily get intense. You will sit there watching the entire screen and trying to stay alive and dodge everything while knowing when to jump and use your superfire. By the way ‘Superfire’ is a special weapon which fires like a machine gun but with the power of a minigun. No alien can stay alive for long against it. You get ammunition for it by collecting the purple mini gem like objects that comes from dead aliens. Fill the meter up and let loose when you need it. The power ups in this game are game changers. There are 3. The purple one fully filles up your superfire meter. The yellow one grants temporary invincibility. The green literally slows down time considerably for you. All the aliens move sooooooo slow. So grab these when you can.

Co-op mode is available here. X35 Earthwalker has played with others before and it’s hilarious. The friend would die quite frequently because they struggle to watch everything that’s happening and dodge in time so X35 has to always bring them back at the upgrade screen. It’s so much fun. We will be jumping around, fire non stop and that’s what’s also difficult about this game. There are projectiles pretty much everywhere so some lose track of what’s going on and even lose where their ship is and finds it but only a few moments before it dies.

Overall Crossfire 2 is an amazing game. The graphics are great. The music is great. The sounds are very good. The game could have been bigger but it originally was like an ios game for phones and tablets so it’s acceptable by those standards. It’s a great amount of fun, even to this day. The developers ‘Radian games’ did a fantastic job with this game. Just wished more people had it. This game is still worth checking out. Whether you think this game is great or not is not as important as thinking about… doing the ‘Earth Walk!’