Decay of Logos is a new action role playing game developed by ‘Amplify Creations‘ and published by ‘Rising Star Games‘. Decay of Logos is said to be coming out the 27th of August on PlayStation 4, 29th for Nintendo Switch and 30th for Xbox One and PC. Decay of Logos is looking like a real adventure, a serious game. Let’s take a look.

Players control a lady named Ada. Ada is on a journey… of revenge. Her village got attacked and destroyed. You only have faint remembrance of the banners of the attackers but you need more information. You were when up by a mystical Elk. Ada feels an overwhelming sense of calm and safety. There was no reasonable explanation for it, but Ada somehow felt connected to the creature. So the whole game takes place in a very fantasy styled world. Expect fictional stuff everywhere and lots of imagination. You are in a ancient kingdom. The ruler is a king who is a big fan of wars and military affairs. We do know that the king was that good of a father and showed little affection for his sons.

Things get worse for him as his wife the queen died during childbirth. Now this child is his only daughter. He pays attention to her and sees to only care about protecting her. So off course the sons now bigger are becoming more distant from their dad. You can see where this is going. Eventually the family divides. The sons all hate their sister, they themselves separated from each other with each prince controlling their own part of the kingdom. All have a huge thirst for power and heavily influenced the parts they rule, “each territory reflecting their particular idiosyncrasies.”

We like the story so far of Decay of logos. It’s got a lore and some deep situations going on. It believably explains the world and why the kingdom is the way it is now. You can understand the sons and why they hate their sister, even though they are wrong to hate her. It’s the dads fault in this case. The player starts in Laetus grove. Players will also quickly learn that the world in Decay of Logos is not an ordinary world. You will see all kinds of beings: mythical creatures, wizards, ancient species and even knights.

Now remember that Decay of Logos is an action role playing game. Decay of Logos shows a lot of emphasis on exploration, inventory management and off course tactical combat. The elk is also a big part of the gameplay as it’s needed for combat, puzzle interaction and definitely exploration. Your greatest ally. We’ve played enough video game to know when somethings up. Clearly this elk isn’t just an elk and it’s probably going to be someone from her village and it being an elk is a result from the attack on the village. Either the person died and is now an elk spirit or they became an elk through mystical means or whatever. This was sort of similar in terms of the game Never Alone with the fox being a boy all this time… oh what… we are suppose to say something?… that’s right… spoiler alert.

Now throughout this world there are some friendly NPC’s which are said to be a good source of tips, game lore and even some items so make sure to check them out and socialise. Now remember that this whole game is filled with monsters, mythical creatures, wizards and even ancient species. So you will face many dangers and different foes. The combat is confirmed to be difficult… but also worth it. Players must take into account that the type of enemy you are facing and your location. Those are factors. 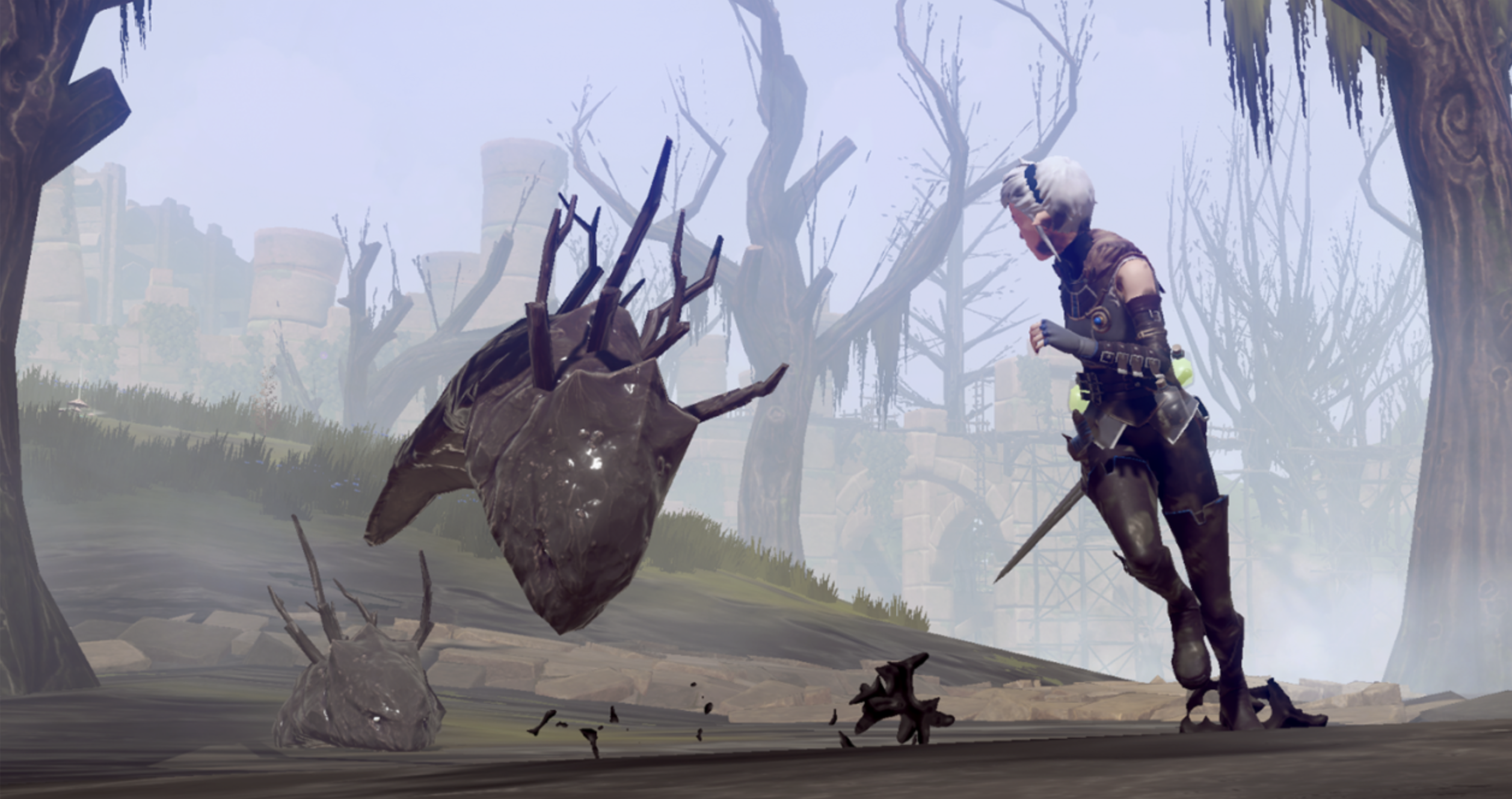 Decay of Logos allows you to fight back. Your character Ada has got some mobility to her name and a good fighter. She jump, parry (learn this), roll, sprint, backstep and slide. So use this stuff. It will save your life. Players can have different long and short range weapons. There’s more. There’s defence equipment too like shields. Elemental effects are here too so take this into account when facing certain enemies. Ada can also perform powerful combos so make sure your timing is right.

Now to make the game more realistic, and force players to pay more attention, there’s also stamina. Your actions requires stamina. Evading and counter attacking requires stamina so don’t run out. Decay of Logos is also quite a magical world as Ada is able to also use magic but that’s something you’ll discover as you progress through the game. So combat mobility, stamina, elemental effects, magic and powerful combos.

There’s more though and we do like this feature. When you get hit by enemies, your stats decrease making you weaker until you find and use a camp and rest. When you die you will wake up from a nightmare at the last shrine or camp used. Since you wake up some enemies will respawn and your stats will be reduced temporarily.

Remember that Decay of Logos is also as role playing game (RPG). There is a level up system. Your stats grow as you interact and activate mechanism, off course kill enemies and even finding chests, we mean secret ones will boost you up. Don’t forget that getting hurt reduces your stats temporarily.  Lastly know that Camps and Shrines aren’t the same thing. Shrines are basically checkpoints while Camps can be used to save the game and sleep to recover which has it’s risks as you can get ambushed during your sleep.

We checked out some Decay of Logos gameplay and it does looks cool so far. We like the design style. We like that you have to gain the elk’s trust through protecting it and feeding it. There are secrets in the lands, your interactions with some NPC’s may effect your game later on, it’s pretty much an open world and that there’s a good variety of enemies so far. The graphics are good and the environments are cool too with the variety.  So far Decay of logos is doing some stuff right.

Overall Decay of Logos seems like a very good game. It’s doing it’s own thing and not a Zelda: Breath of the Wildclone as some internet people have said. The developers ‘Amplify Creations’ have done a good job with this game so far. We at X35 Earthwalker will have to keep an eye out for this game. Now Decay of Logos may be a fantasy world but one more awesome world that’s completely real is… the ‘Earth Walk!’