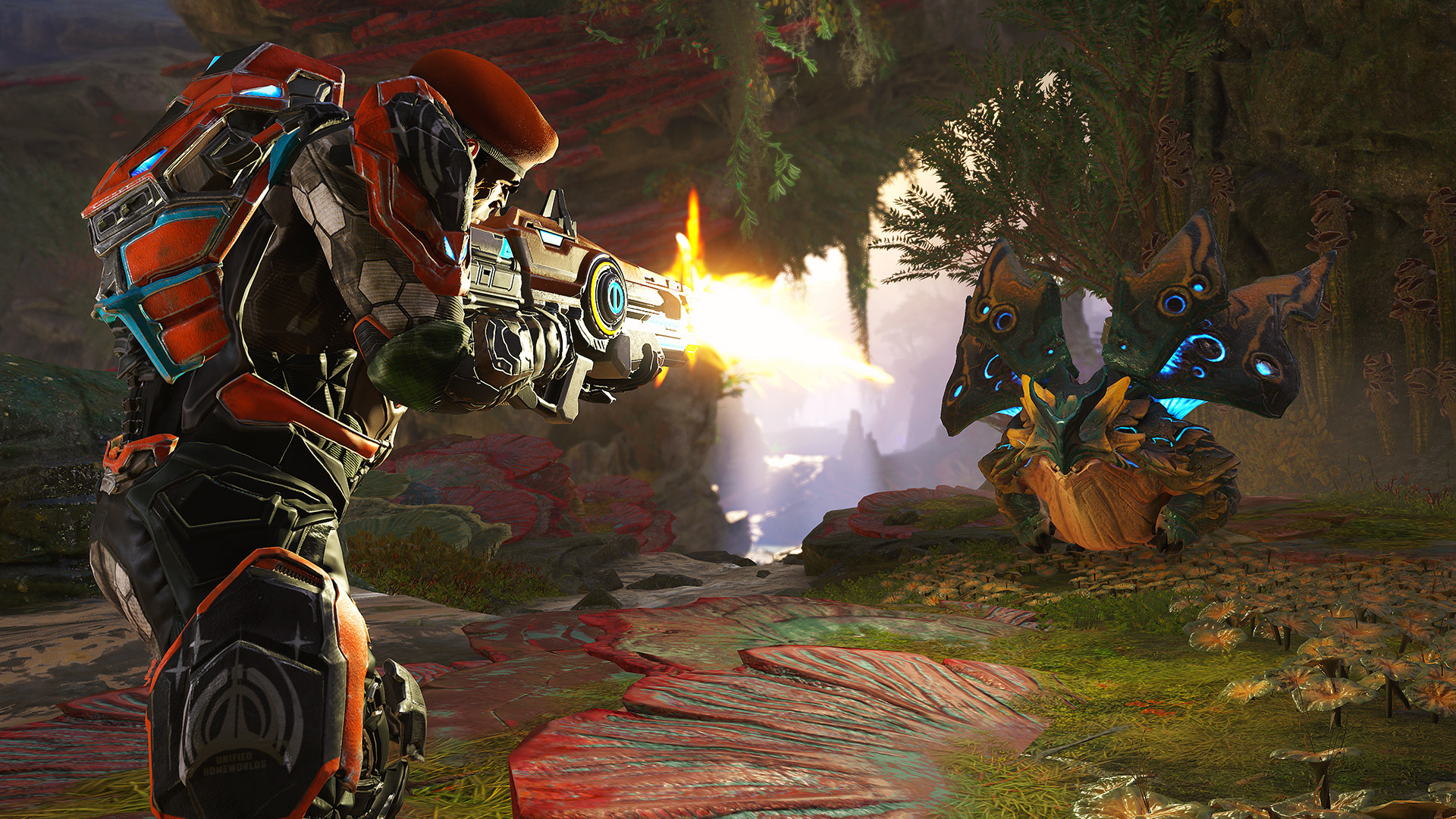 Crucible has been around for a bit now so we decide to take another look at it. Crucible is a team based action shooter game developed by ‘Amazon Games’. So check out our first G-blog post on Crucible right here. So we just wanted to give our thoughts on the action.

The first things that really jumps out and what we like is the environments. These maps are big, got space and obstacles allowing for moving around and making cover out of a big hill or rock for example. There’s colours everywhere and it meets your idea of a futuristic alien planet. You expect colourful flora and fauna, you expect crystalline rocks sticking out of the ground. If there is intelligent life, you expect some strange infrastructure. The maps look good.

Ajonah, the Orisi, character is clearly more of a long ranged fighter and her abilities show that. Her squid mine doesn’t seem that effective from what we have seen so far. Yes, the mines along with her other equipment are meant to help her stay away and keep foes away. Her grappling hook is really good though. The hook has a big range, bigger than you would think. You can grab a rock or whatever and swing through the air like spider man. The animation she has as she swings is excellent and acrobatic. 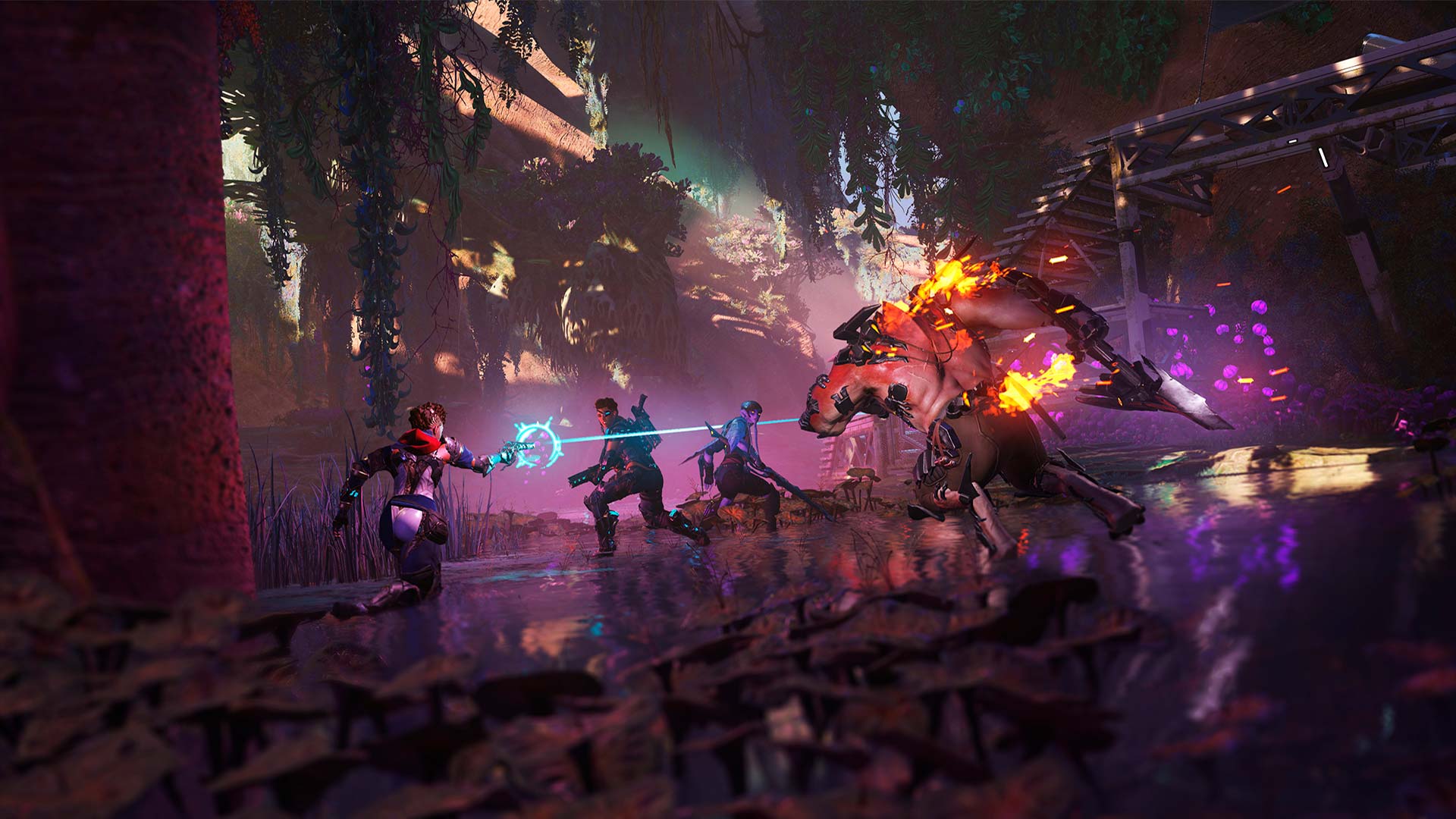 Sazan is a straightforward character and is all about cycling through her weapons for the best situation. The Electroknife is good for that in between attack as it recharges weapon energy getting your equipment ready and if you land that knife throw it does damage over time for a good while. Her shotgun doesn’t seem good though. The damage seems too low and seems very in accurate. Overall she does what it says on the box.

Crucible does get tactical and will force players to work together as some characters are far weaker than others in terms of their health. For example Bugg is clearly a support type and not to be upfront as other characters destroy him quick. He is strong by shielding allies and even setting up turrets. So players need to take into account what they are suppose to do with that character. Like what were they made for. If you want to rush in then get an actual rush character.

The equipment make a difference. Like the medkit which off course restores health and can get you back in the fight faster. The characters equipment customisation is simple and straightforward. 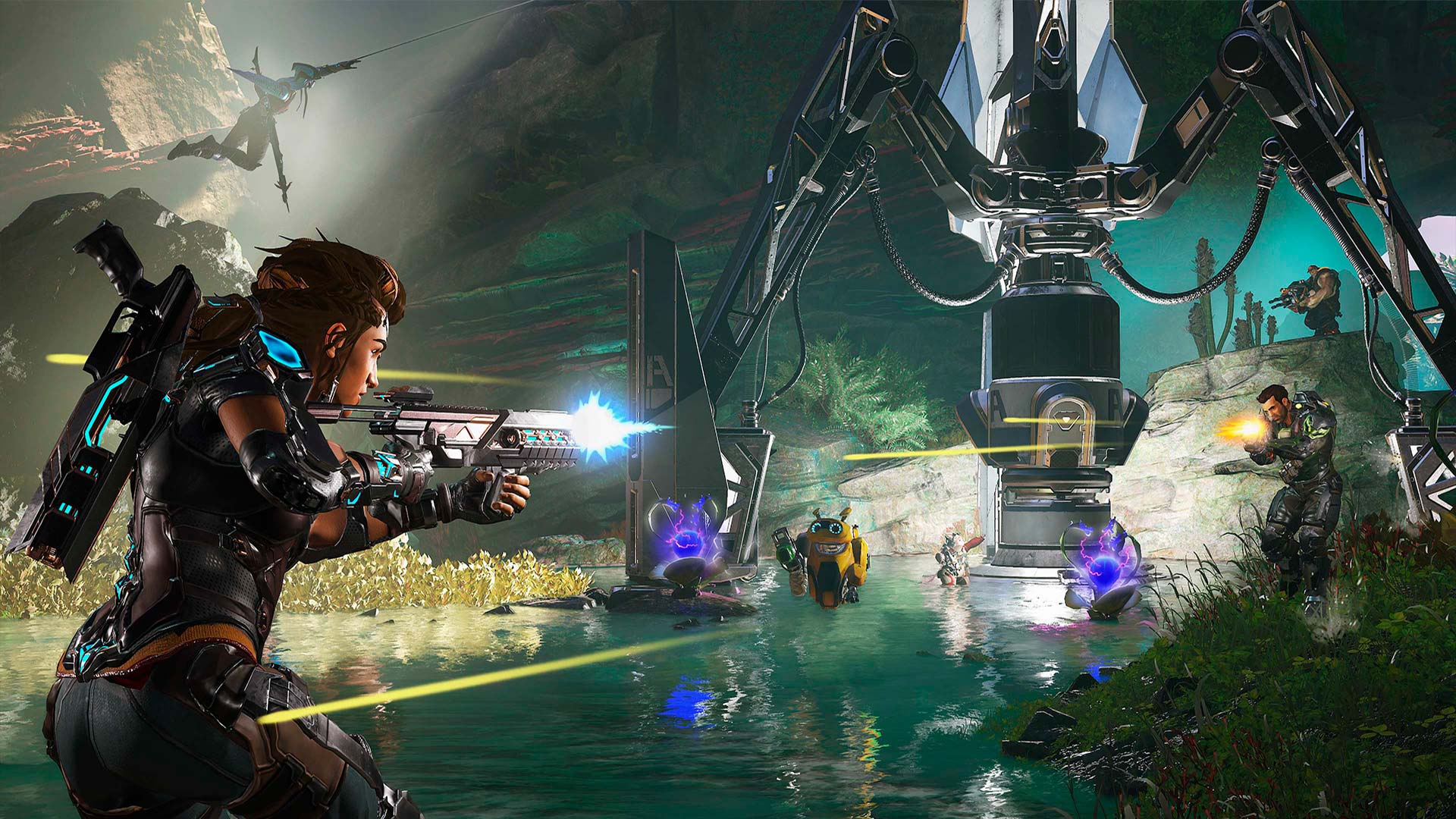 The map of the battlefield is very good. It’s a full map, detailed and has multiple symbols to show everything. This gives a goo amount of information for players to use. You can see your team and move while viewing the map.

There’s an in game during match upgrade system where as you gather essence you upgrade your character. For example on upgrade on Sazan means a more accurate shotgun and even dashing more frequently. The dash ability does make a difference.

We like what we see in terms of gameplay. We just hope the balancing of the characters improve. Yes we know the games new but it’s just our thoughts. In more time players will figure out the upgrade paths for all characters and we hope those are balanced too which is hard to do in games like this.

Crucible just looks like a fun game right now. Definitely different from other games right now but obviously a similar concept. The A.I enemies which makes Crucible stand out need more variety. We need more than just that big alien cow thing. We need fierce monsters the are risky too. Now Crucible may have some good stuff going on but it’s not nearly as good as… the ‘Earth Walk!’

Crucible is a new team based action shooter developed and published by ‘Amazon Games‘ and also Relentless Studios is involved. Crucible came out the 20th of May 2020 on PC. It might come out on consoles like Xbox but there has been no given date. Games like this trend to move to consoles anyways so it’s reasonable to expect a console release. Let’s take a look.

Firstly we want to say that we normally never write about games like Crucible that are currently PC only so we will keep this short but we think it’s a bad idea to make a serious team based shooter game only on PC. Even worse if you do move it to consoles imagine the huge disadvantage console players will have. They will need to separate console and pc players.

Since it’s a team based shooter, we know what to expect. Two teams with different class and types of characters with different skills working together to eliminate the other teamer some sort of objectives. We know of three game modes: ‘Alpha hunters’ which is 8 teams of 2 who straight up battle it out to be the lats team standing. ‘Harvester Command’ which two teams of eight this time and they are fighting to hold essence harvesters to be the first to get 100 points. ‘Heart of the Hives’ is the real interesting one though.

Heart of the Hives is what is getting Crucible some attention and making others say that Crucible is fresh and stands out from other team based shooters like Overwatch or Paladins. In Heart of the Hives two teams of four have to face “large, neutral bosses” in the field. The team which kills three bosses and capture their “hearts” is the winner. aWe don’t know what the hearts are. Now this isn’t too original as Halo 5 guardians has a similar thing. In Warzone mode two big teams will fight each other for points but at certain times A.I enemies and bosses will show up on the field for teams to beat to get extra points to get closer to victory. So this neutral A.I thing has been done before. Also there are small A.I enemies who inhabit bases and cause trouble. So we are glad Crucible are doing this as it’s a great idea and truly adds to the combat. Ee just hope they do it well.

Now quickly let’s discuss the hunters. Captain mendoza who is your basic good balance soldier type who has a run and gun style. He can aim, sprint, throw a grenade, so basically Viktor from paladins. The character you can easily learn and do some good ranged damage. Shakirri is your honour bound, disciplined fighter. She has two stances: pistal and sword. In pistol she off course shoots, can zoom in but in the sword stance you move faster, can send out a disruption wave to harm and disrupt enemies. She also has a force field to protect herself. There’s Tosca is a Chirt and has a bad attitude. It’s a small genius creature that has a small teleportation ability, fires a acid rounds shotgun and can through in an explosive compound (basically a grenade). Tosca also has an X-ray ability which “immediately detect all opponents within 50 meters in front of you.” There’s more like Rahi & brother, Summer, Bugg, Sazan, Drakahl, and Ajonah who’s actually cool. She’s a fish person, a Osiri to be exact and specialises in long range combat and uses traps.

Overall Crucible looks like a cool looking team shooter game. Having neutral A.I enemies is an awesome feature and we hope they are actually a challenge. We like the different character species and how different they look with their own personality traits, issues and story. Definitely liking the graphics and visuals and so far the abilities look useful and sort of balanced. The developers ‘Amazon Games’ have done a good job so far. We at X35 Earthwalker hope Crucible comes to consoles and fast otherwise don’t bother. Now Crucible may have futuristic battles and species but even those are primitive when compared too… the ‘Earth Walk!’