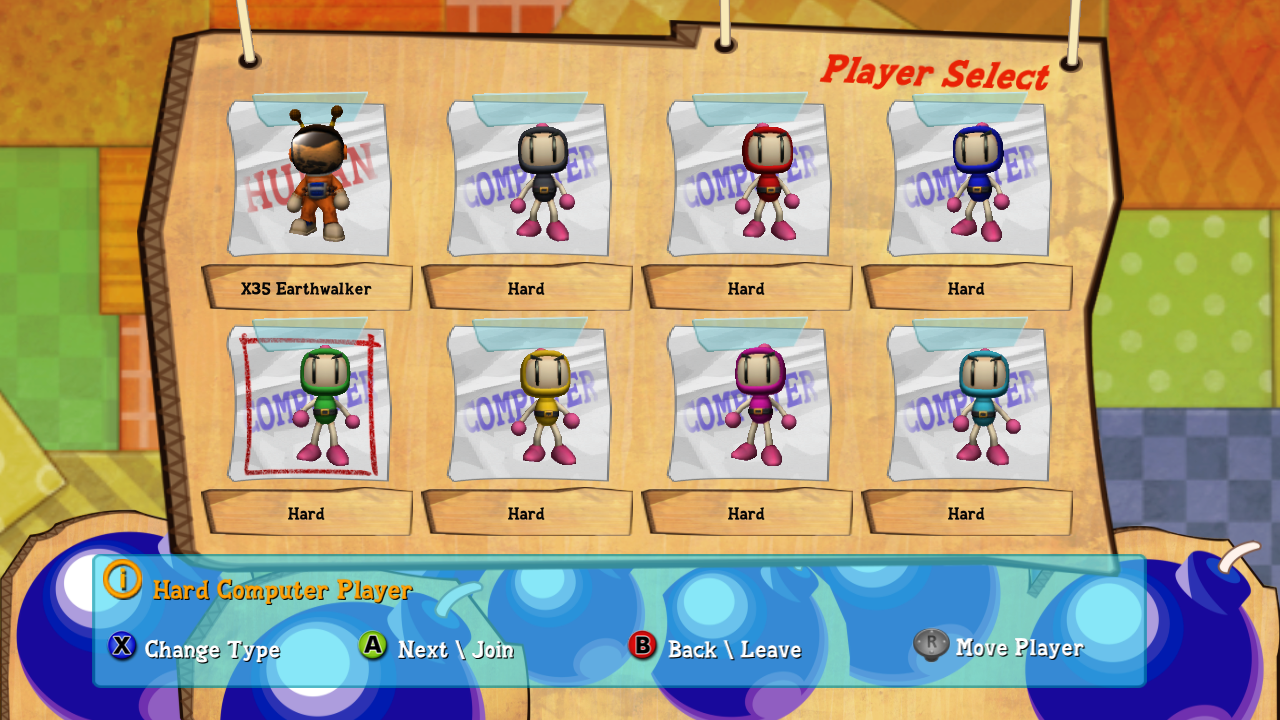 Bomberman Battlefest is absolutely great. This by far the best bomberman game we have played to date. That doesn’t mean it’s perfect because it isn’t. For starters it doesn’t have coin battle multiplayer mode like Bomberman Generation on the gamecube. That was a great game as well.

Bomberman battlefest is great for both single player and multiplayer. If you are playing by yourself then get ready because the bots in this game are ruthless. They are smart in terms of using power ups and dodging your bombs. There have been moments where X35 has had multiple maximum fire up remote control bombs and was dropping and detonating them instantly but the bot was just going around an dodging them all, making it look so easy. The bots also have had their dumb moments like when you put a bomb next to one but that bot doesn’t move at all, like it doesn’t know what to do. This only happens rarely though. They also have evil mastermind moments as well. For example there was that time when X35 was minding his own business collecting power ups when a bot decides to pick up and hurl a bomb, from a distance away behind a wall, and it lands perfectly behind X35 trapping him in and killing him. Those bots aren’t a joke.

There are many different game modes which seriously mixes things up. There is: Battle, Zombie, Paint bomb, Capture the crown, Bankroll, Capture the flag and VIP. All of these modes can be done with teams so you and your friend vs two others or the bots. Some of the modes like Battle, VIP and Paint bomb are very simple and just pure fun while the others are actually very strategic. Who would have thought that Bomberman would be very strategic? Well it truly is. Especially Zombie, bankroll and capture the flag. We aren’t joking when we say that MLG ain’t got nothing on this. When you play with other people and you have communication with your team, everything changes. You have to coordinate your bomb planting and attacks to make sure you don’t hit your team mates and make them lose their power ups. Did we say power ups? They are the most important thing. At times, more important than the objective. Do you spread out the power ups amongst your team or do you have maybe one or two powerful team mates? Which enemy do you target. Who gets what role? Do you scramble for lost power ups or not.

We aren’t exaggerating. The amount of concentration required when things get serious is ridiculous. X35 has said before that a lot of times things get more intense in Bomberman Battlefest than Halo 5 Guardians and Gears of war 4. The hardest thing we ever had to do in Bomberman Battlefest was Team Zombie where on one team was X35 Earthwalker, Diamondz L45, N63 Prodigy and X7Earthenvessel vs four hard difficulty bots. This was the most difficult and intense match we ever had in Bomberman Battlefest. The worst part or should we say the best part was that we lost. It was first to five matches and the final score was 4-5. It was the final deciding match and boy was the communication flying. Stupid bots with their stupid computer calculated actions. It was all laughs and fun at the end though. We laughed at our silly mistakes and dumb deaths. Like kicking a full power bomb across the map just for it accidentally kill one of your allies in the process and then the enemies quickly scavenge most of the power ups that scattered. It’s one of those things that you just have to try for yourself. We will upload a video of X35 and some of his gaming friends soon on youtube.

The combinations that you can come up with in the matches are insane. Don’t just grab every bomb powerup you see. Think about it and what you want. For example you may want to grab the double it power up above another fire up. Double it is powerful once used correctly. Imagine what happens when you have two double it, maximum fire up, at least three bombs and the dangerous bomb. Answer is… complete map control. One max dangerous bomb covers almost like one quarter of the map but if you chain three together with the right spacing, you can completely wipe out all the enemy, especially if they are slow, while painting the entire map in game modes like paint bomb and zombie. Imagine that instead of dangerous bombs, you have cluster bombs. It’s more dangerous than the dangerous bomb in our opinion because you may forget where the bombs will explode from and when many are linked together and spread out you may feel that no where is safe and where you think it’s safe, it actually isn’t. Matter of fact X35 Earthwalker’s latest Bomberman Battlefest youtube video shows just how crazy it can get.

Overall this game is just absolutely amazing. It brings lots of countless laugh and fun. If you just want to play the game then you can certainly do that. If you want to go pro and play tournament style like matches then Bomberman Battlefest certainly has that too. X35 Earthwalker himself may plan to start actual tournaments with this game so be on the look out. 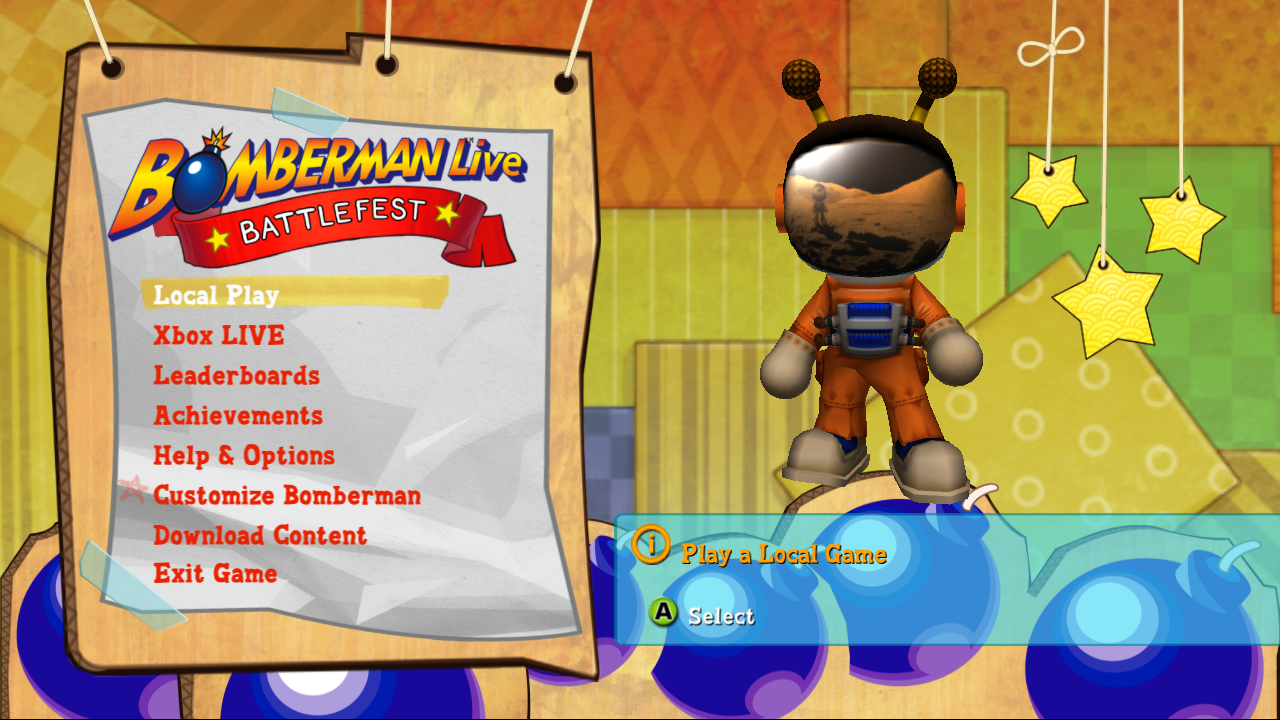 Bomberman Battlefest is crazy. Crazy fun. Crazy good. Crazy intense. If you haven’t played Bomberman Battlefest then we understand as it is quite old-ish now but it’s one of those games where you can keep playing for years to come. Want proof? When X35 Earthwalker is still by a nintendo gamecube he will still sometimes play Pario party, Pikmin and Monkey balls which were all fantastic games but old. Bomberman battlefest is one of those games because of how simple it is to play but how deep, competitive and intense it can really get.

Intense? Don’t you just run around and blow up blocks and your opponents in Bomberman battlefest? Yes but so much more. When you play against easy difficulty bots then it feels like that but when you play against 3 hard difficulty bots then it becomes a struggle. The bots dodge bombs like they were paid to do it. They will do tricky things like throw and punch bombs out of the arena just for it to bounce around to the otherside and trap you. Yes we admit one of us did get trapped by this before. It’s embarrassing but it happens. Many times it comes down to sudden death to beat the bots as they have problems with falling blocks. Just wait. It gets crazier. It’s up to 8 players. So imagine a all against all standard battle mode against 7 hard difficulty bots. It becomes chaotic. Wait! It gets crazier.

The types of bombs are to blame. The power bomb makes your bomb blast go all the way to the edges of the arena. The remote control bomb lets you detonate bombs when you want. Pass through bomb (use to be spike bomb) allows your bomb blasts to pass through soft blocks instead of stopping at one. Laser bombs explode when someone crosses the laser lines it sets up. Cluster bomb sends out a bomb to the left, right and forward when it explodes. Rocket bombs travel in the direction you was facing when you placed it and then explodes after hitting something solid. Dangerous bomb explodes not in lines but squares, at max range this covers one quarter of the arena. Now imagine everyone fighting to get these and combine them with fire ups to increase bomb blasts, speed ups to move faster and bomb ups so that they can drop more. There are more power ups that help like power glove which lets you pick up and throw bombs. Double special which lets you drop 2 of your special bombs at a time and ‘Barrier-drop’ which lets you drop in a soft block. Now play against 3 of your friends and see how hectic things can and will get.

One of X35 Earthwalker’s favourite is when you play an all against all battle game mode on the giant map. It’s basically a standard level but with a much bigger arena. Here all players get a bit of a chance to breathe and then kick of the battle. The worse part is that bots will target you more than each other so the pressure is constantly on. A rocket bomb flying over there. A laser bomb prevents you from getting to that side of the arena. Some crazy guy running around dropping max range dangerous bombs forcing everyone to run away for their lives. Lastly there’s always that one player who stays away from everyone and keeps kicking bombs towards the others from a safe distance. That dirty coward. It’s also about speed. You must start off fast and not waste a second. Plant bombs as fast as possible and get power ups as fast as possible. The most important power ups are definitely speed ups as they allow you to compete for other power ups better and evading bombs become much easier. Off course more bombs and more blast range is also important but the main thing is to get them and keep the advantage. There is nothing worse than going up against players that are literally moving twice as fast as you. You never get power ups and they try to trap you in between bombs.

The ultimate intense strategy is when you and 3 friends take on 4 human player or even worse, hard difficulty bots in Zombie mode. This is where the real challenge comes. The aim of zombie is to paint the arena floor with your colours by your bomb blasts. Off course anyone can take over your coloured sqaures. Everyone is invincible as in they come back after every death but everytime you die you lose all your power ups and they are scattered across the arena for everyone to take take for themselves. So now what happens when the player on your team with the most power ups dies and your enemies get some of the scattered items? Winning becomes that much harder. Your top bomber could be the player with the power bomb painting many squares with one bomb. So your team makes sure to protect him but then that player dies and it’s a mad scramble. The worst is when someone has ‘Double special’, dangerous bomb and full fire. They control the whole match. Oh yeah, by the way, it’s all friendly fire so watch out for your teams bombs as well.

Not too long ago X35 Earthwalker did some serious Bomberman tournament and the matches were so intense. The bots are not easy at all. They are really tough. The best was the team zombie matches. It got to the point where the matches came down to 4-4. whoever won would have won the whole tournament. Lots of laughs, screams and strategies with a hint of frustration included for some gamers. We have never got so tactical for some fun matches before. All we are saying is that Bomberman Battlefest is absolute gold in terms of fun. Play with family, friends or even solo, it doesn’t matter. X35 Earthwalker will do some livestreams and videos of this game and the action it brings in the future so make sure to follow him on Twitter and Mixer to know when.