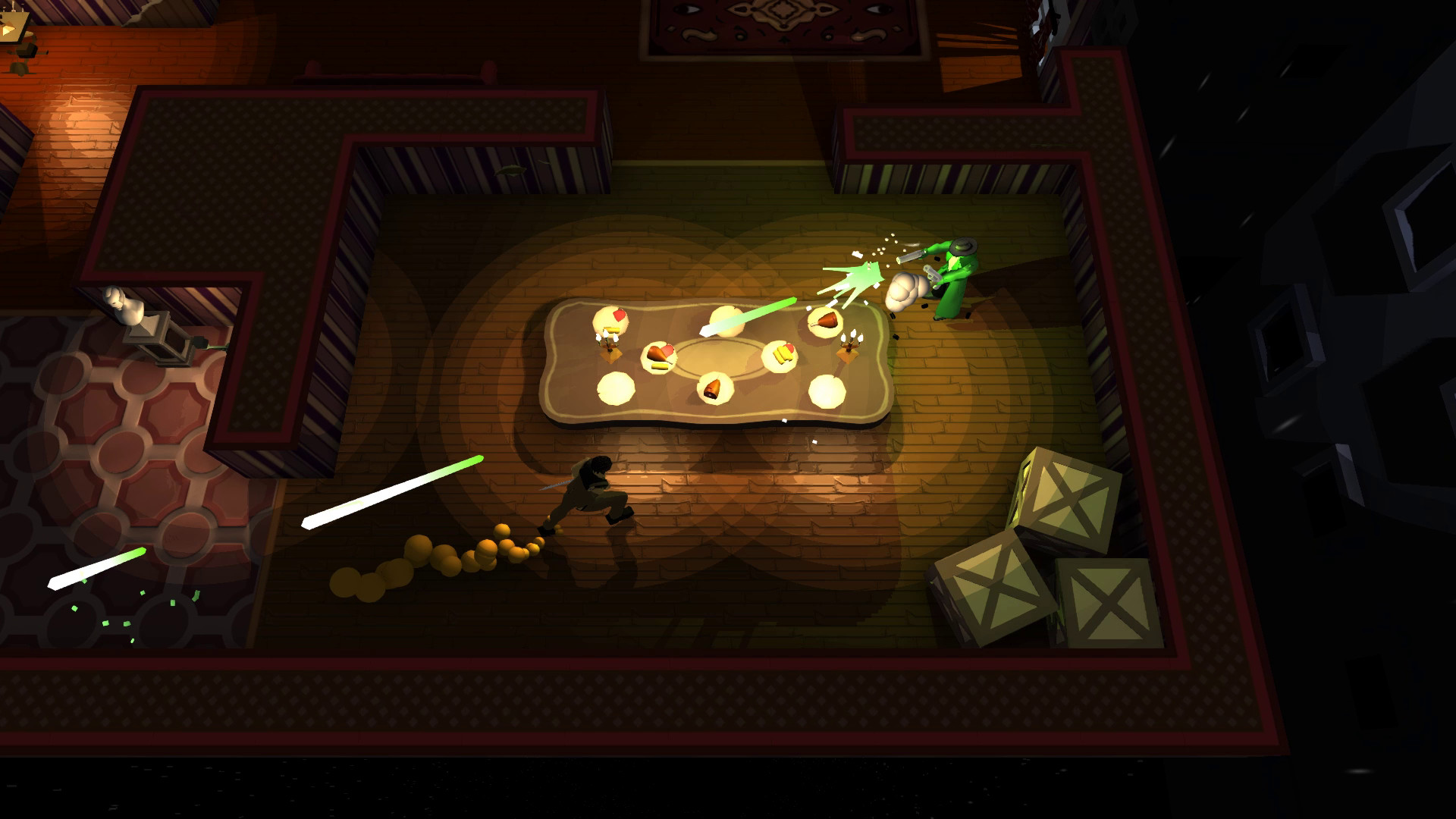 Sundown is a new hide and seek shooter game developed by ‘Mild Beast Games‘ but published by ‘Versus Evil‘. It is coming out the Xbox One, Nintendo Switch, PS4 and PC (currently available on Discord) but no given date. It just says 2018. This game has a very interesting concept and we hope it pulls it off well.

Sundown is all about hide and seek, which means playing smart. Running around firing at everything may not work very well against a patient and accurate player. Basically everyone is covered in darkness. The whole map is dark. Players are only visible when you dash, shoot or slash. So do you make the first move thinking you know where your opponent is or do you play reactive and wait for your enemies to make the first move and then close in on them? There are many tactical approaches in concepts like this. 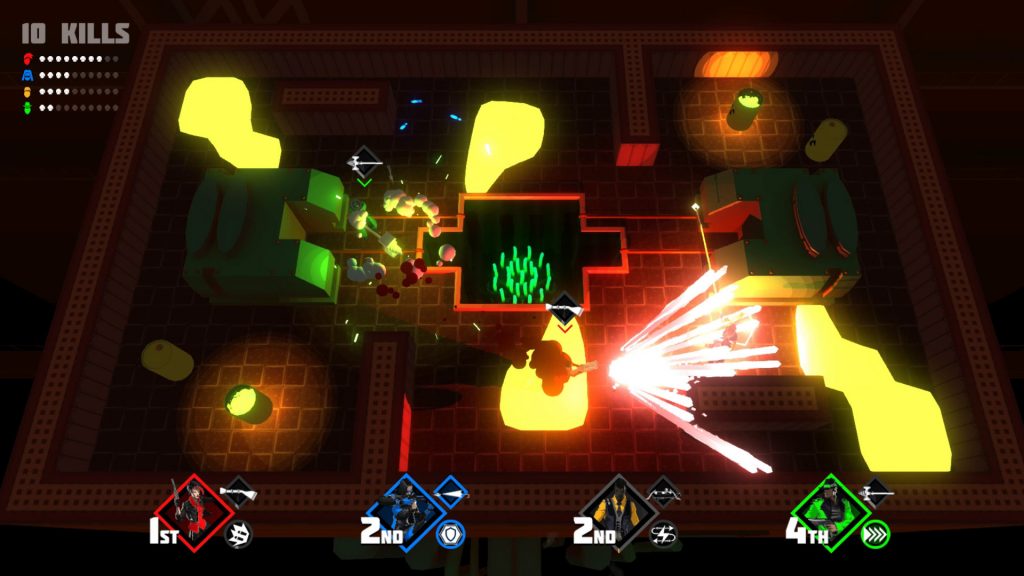 Now naturally this could make Sundown not only a tactical and strategic game but also an intense game where players might get on the edge of their seat. Think about it. You are against another skilled player who you know is moving around. If you attack and miss, they know where you are and will finish you off. We can imagine this in serious pro level matches where it sort of player like chess in a way.

Sundown is also for casual gamers who just want to have fun, and they can. This is because Sundown is also multiplayer. Both online and offline up to four players. Finally another developer with sense. Not everyone has a clan online or wants to be part of a clan or wants to play with others. The most fun X35 Earthwalker has had in gaming was playing with friends or family at home in the same room with trash talking and laughs. So gamers have some options in Sundown. 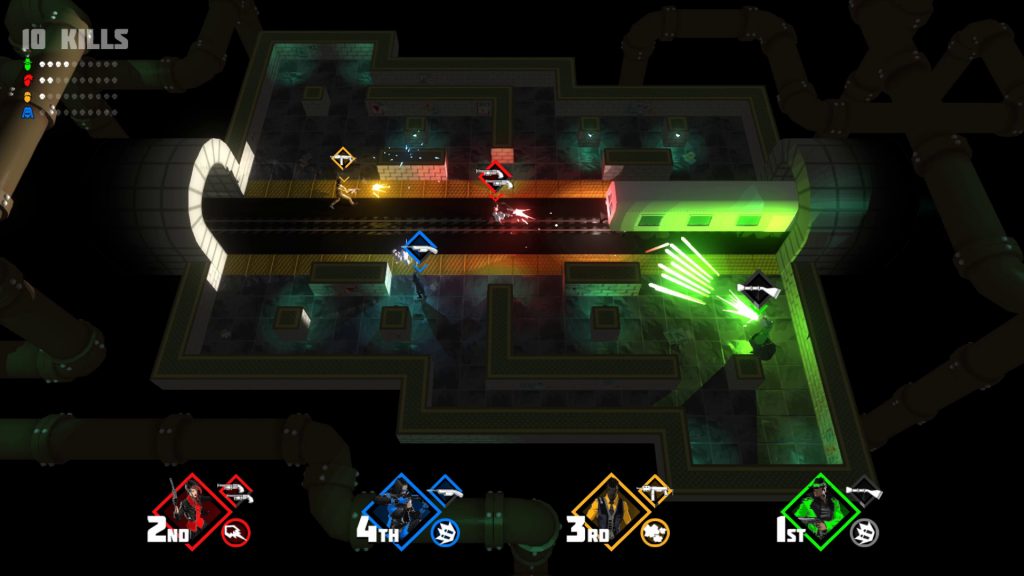 There is also a single player challenge mode which we hope does give a challenge with varying difficulty. Players can also take on offline bots to sharpen their skills or just to have a good time. Either way, the real challenge will be taking on other players online. There are currently six levels: Factory, Reactor, Mansion, Subway, Disco and Garden. Each level has a different level design layout concerning cover, obstacles etc. Each level does look like what their name says it is.

Very important are the weapons. Sundown has a variety of weapons but not a wide variety to keep things more simple and tactical. The Lobshot fires grenades that bounce around but the alt fire let’s you fire shots over walls. The Sniper is a powerful sniper rifle that can fire through walls and the alt fire drops a mine that’s remote detonated. Revolvers fire shots that bounce of walls and the alt fire shoots a flare that reveal other players. The Umbrella allows you to dash around very quickly and it’s alt fire allows you to block bullets. The Shotgun is powerful and has spread but alt fire empties the entire clip but gives that shot even more spread. There are more weapons and some are pretty cool. Good job Sundown.

We checked out some gameplay and what we mainly see is the fun casual side of the game. We see fast paced action and lots of people dying. This proves the two sides of Sundown, Casual and serious, fast paced and slow depending on who your opponents are. Melee weapons see to have a more clear advantage. We hope Sundown is carefully balanced. The graphics are alright for it’s style and the sounds are alright too.

Overall Sundown does seem like a good game. It’s concept is good and seems to have been done well. There are power ups like shields which is a good thing. There’s more we could say but we will leave it here. The developers ‘Mild Beast Games’ did a good job with this game. We at X35 Earthwalker look forward to seeing how gamers like Sundown. Now darkness might be your friend in this game but even the darkness can’t help you against… the ‘Earth Walk!’