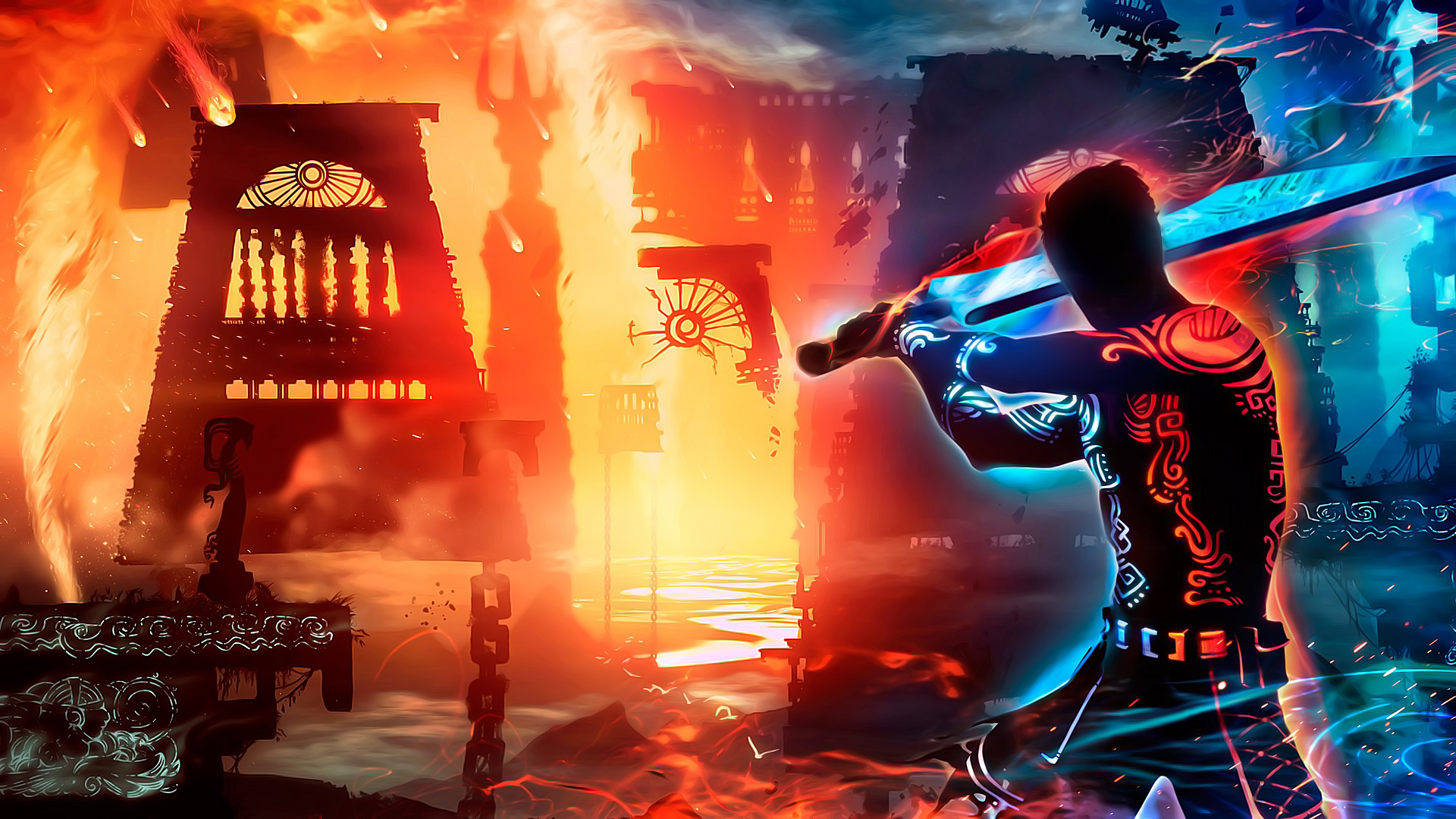 Outland was a game that we had our eyes on for a very long time. Years even. Outland was originally on the PC, Xbox and PS3. It’s a 2D dynamic platformer game. This game is awesome straight up. X35 Earthwalkeris currently playing the game and has nothing but good things to say about it. Basically you play a man who has the same destiny as a man from 20,000 years ago. Two powerful being called, ‘The sisters’, helped created everything but also wanted to destroy everything. They got imprisoned by the gods. The man from 20,000 years ago went to a place called ‘eternity’ to face them, wielding the powers of light and dark. Our character starts of with yellow/orange-ish lines all over his body which is the neutral colour in this game, meaning not light or dark. Things that are orange are neither light or dark. A bit further into the game you get to control that man from 20,000 years ago and there are some clear differences. The man has the ability to become pure light or dark (blue or red respectively). When light, light energy attacks can’t hurt him. When dark, dark energy attacks can’t hurt him either. Also he could only hurt light enemies when he is dark and vice versa. Up until that point we only faced neutral enemies. The next major difference is that our character stands in a ready to move position with hands by his side, while the man from 20,000 years ago stood like a boss, with arms folded everything. Bursting with confidence. Do we seriously get to become like this guy?

You travel through multiple areas. Starting with the ‘Jungle’, a lush quiet place filled with natural enemies like spiders and plants. Lovely looking level that prepares you for everything to come. Next is called ‘Origin’ where the player can reach all the other areas and the gate to where the Sisters are. The next area is the ‘Underworld’ where things are dark, dirty and not pleasant at all, filled with humanoid weapon wielding enemies and flying enemies that shoot light and dark energy. giant sized spiders we believe are found here as well. The next area is the ‘City’ and boy does it look like a grand city indeed. Ancient and super large. This place has multiple humanoid enemies, giant soldier enemies with large maces, flying enemies. This area has is also the start of tricky level design like moments when you have to switch between light and dark quickly while dodging energy and even while fighting. The next area is ‘The Sky’ and boy this is literally. You are high up in a snowy mountain and everything we have encountered before is here and worse. All enemies can come as either light or dark. Giant sized spiders and soldiers are back as well with a new enemy too. This level will frustrate players with how difficult the levels within this area are now. The last area is called ‘Eternity’. This place is where everything you come across and face is back and in full force: enemies, hard level designs, light & dark energies, giant enemies, and even mini bosses like that giant soldier with the sword and shield. Combine it all together with the fact that enemies can now change from light to talk after a few moments and you have ‘eternity’.

As you play through the game you come across power ups, which have to be bought using the coins you find and get for killing enemies, and abilities like a ground pound, smite and energy shield. As you collect them, you start to feel more and more like the man from 20,000 years ago and eventually you feel way more powerful than he was. Honestly at this point we feel over powered (OP) for sure. You get to create combos like  like to send an enemy  flying forwards, then uppercut an enemy in the air, then  jump up to slash and finish with a charge attack and if they are still alive then finish with a powerful energy beam. this game is creative and does it very well. The graphics in the game are excellent, the sound effects are relevant and on point. The scenery is well detailed and the music is great and perfect at setting the feel of the locations. My favourite music in the game is the one for boss battles. It really makes me feel that I am in an epic battle and believe me the battle are epic. The boss battles are my favourite part of the game. They are all powerful and large enemies. Each fight requires a specific way to beat them, encouraging strategy and all your abilities work on them also. The boss in the ‘Sky’ is X35 Earthwalker’s favourite and he even said that it was the most epic battle so far. Also each boss has an interesting background story which gets revealed after defeating them. If you want a rematch with the bosses then go to arcade mode and take them on again. Also the achievements for this game are not impossible ones and can all be done.

You will have fun going through this game; however the story could have been told better as we don’t get much except at the beginning and after every boss fight. Other from that we honestly don’t really have a complaint against this game. We would also say that this game should have more music with more obvious differences between them. maybe more dramatic music for some levels though.  The developers ‘Housemarque’ did an excellent job. Many big reviews sites, like ign, game spot meta critic and eurogamer, and gamers all speak very highly of the game and rated it high. This game is awesome and definitely worth checking out.