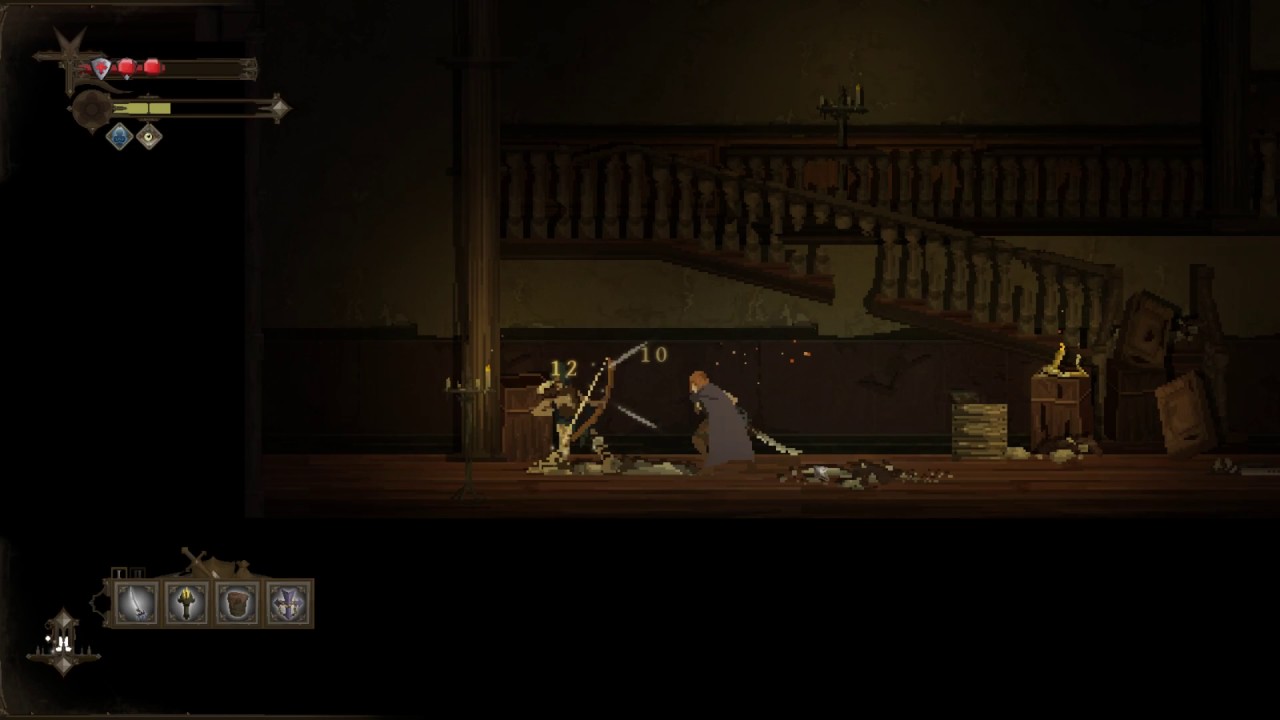 Dark Devotion is a new Action adventure RPG developed by ‘Hibernian Workshop‘ and published by ‘The Arcade Crew’ and ‘Maple Whispering’. It is coming out the first quarter of 2019 on the Xbox One, Nintendo Switch, PS4 and PC. Dark Devotion is suppose to have some serious fights. Let’s take a look.

It’s not fully explained bu the story in Dark Devotion is that a templar sets out on a religious calling. The story must be pieced together by the players. Every item you find and every chest opened contains another piece of the story. You can find clues, a letter and even weapons. All will help piece the story together. This should tell gamers that exploration is required. 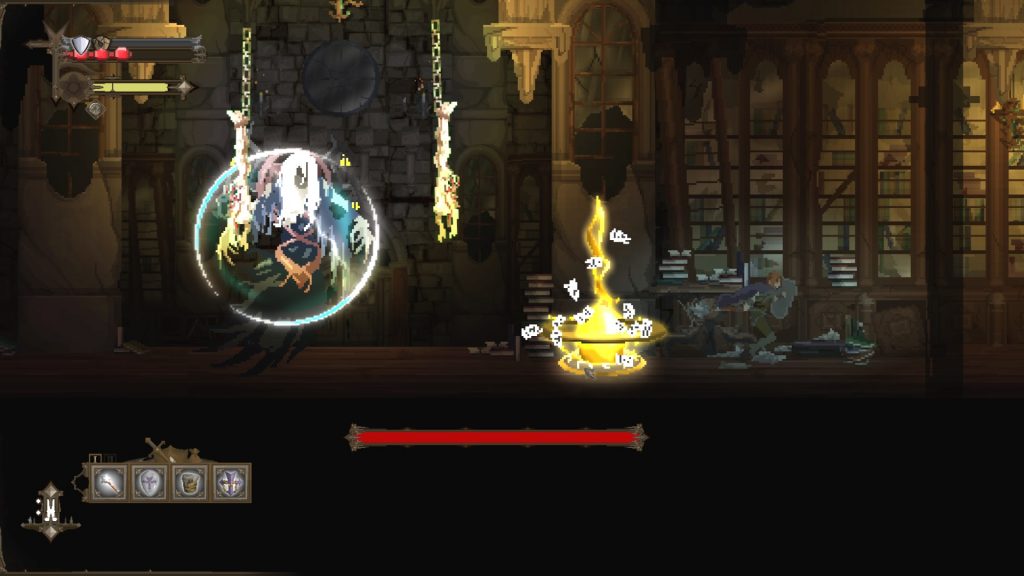 The action takes place in a fallen temple. This temple should have been boarded up and sealed by the way. There are four worlds. Your character must prove himself and dedication to his god. This won’t be easy as this temple is full of danger, answers to your questions and off course secrets. Rumour has it that this temple sort of has a mind of it’s own in a way. So learn it’s ways or have a really hard time.

Now off course this isn’t going to be your Indiana Jones adventure movie. This temple is real bad. Everything in it wants you dead. Players have to make the right decisions. Knowing when to handle curses, knowing when to retreat, knowing when to heal and when to thrust your blade through the monsters face. Every world in Dark Devotion has multiple paths. Each path is its own but you can’t turn back once you go down it. 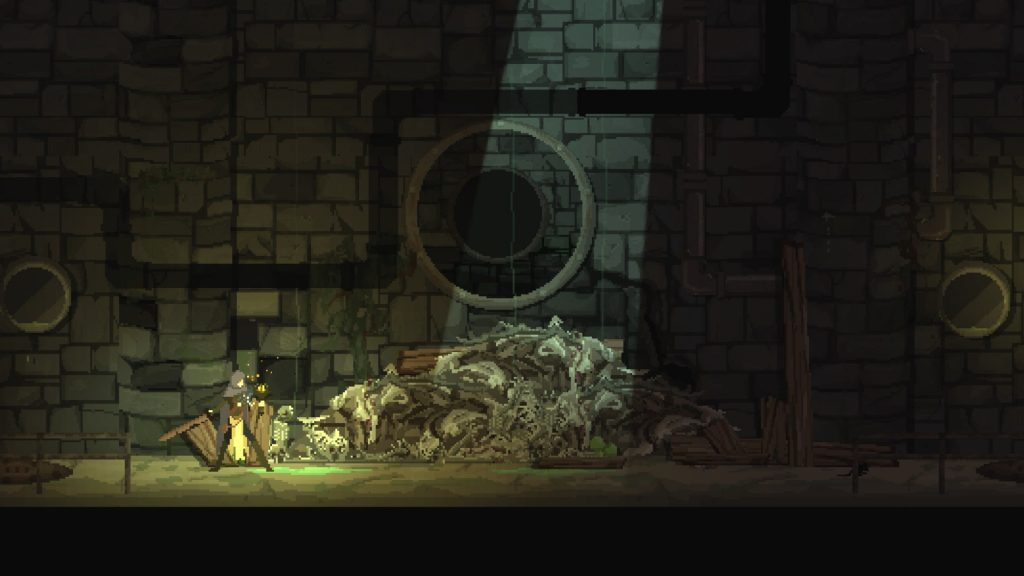 The developers have left lots of rumours and secrets in this game that makes exploring a must. What you find can either be real good or real bad. You might find a monster that kicks your butt in 5 different countries or you may find an altar where you can save the game. Or maybe you find Doctor Who (not really). Either way, players need the items and secrets so you have to take the risk.

Dark Devotion doesn’t leave you at a complete disadvantage as there are a good dozen of weapons, armors, and relics which will give your character the boost she needs. These relics, weapons and armours can be customized with mystical runes. Each of these different items and equipment off course has their own stats and attributes. A game having attributes means that strengths and weaknesses amongst enemies is a mechanic here. 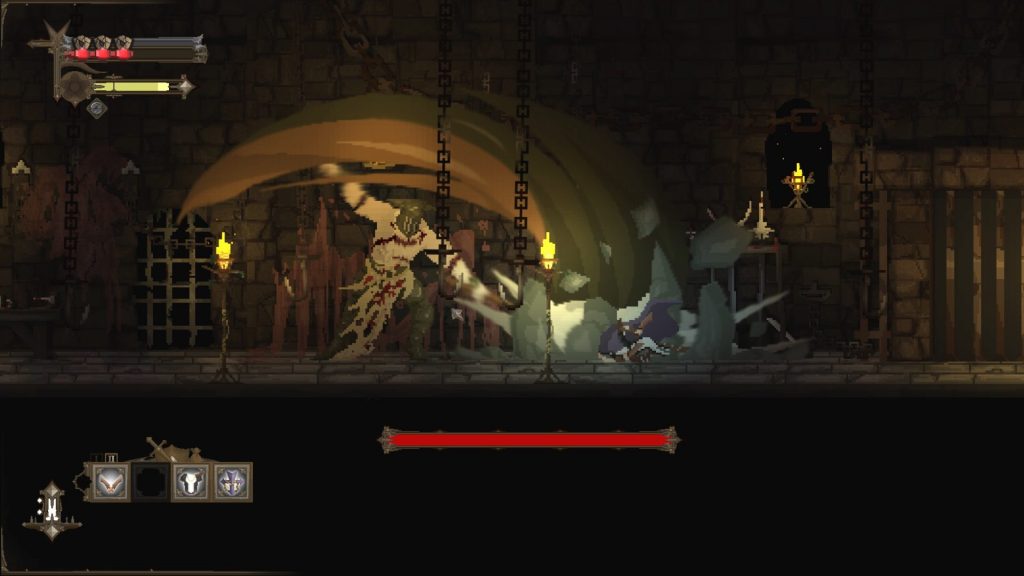 Now off course let’s get to the main dish. The enemies. There are a bunch of them. There’s simple zombie acting ones that approach you and takes a swing at you. All you got to do is time it and dodge. Then there are some big enemies who are chained to a spot, but that doesn’t mean it won’t strike with a mighty slam of their weapon. There are bosses who will make you sweat (probably). Some can teleport and then strike from the other side, some use magic and mystical powers. Powerful swordsmen with flaming swords and more. Each fight can go so badly if you aren’t careful so don’t get to cocky now.

We checked out some gameplay and it’s sort of what we expected. It’s 2D off course, the level design is very nice, everything looks responsive. You can either block or dodge. A variety of enemies who are definitely dangerous, like the pirate looking one who can dash attack. Multiple little areas to explore and items to find for sure. Dark Devotion definitely looks like it’s going to be a difficult game. We so far like what we see.

Overall Dark Devotion looks like a very good game. The graphics are handmade pixel art. The sounds are done well. The temple has traps like swinging pendulums, spike pits and more. One boss enemy looked unreasonable but it’s good to have at least one ridiculous boss. The developers ‘Hibernian Workshop’ did a very good job with this game so far. We at X35 Earthwalker look forward to seeing this game come out. Now the templar in Dark Devotion may be very devoted to what they believe but there is way more devotion in… the ‘Earth Walk!’