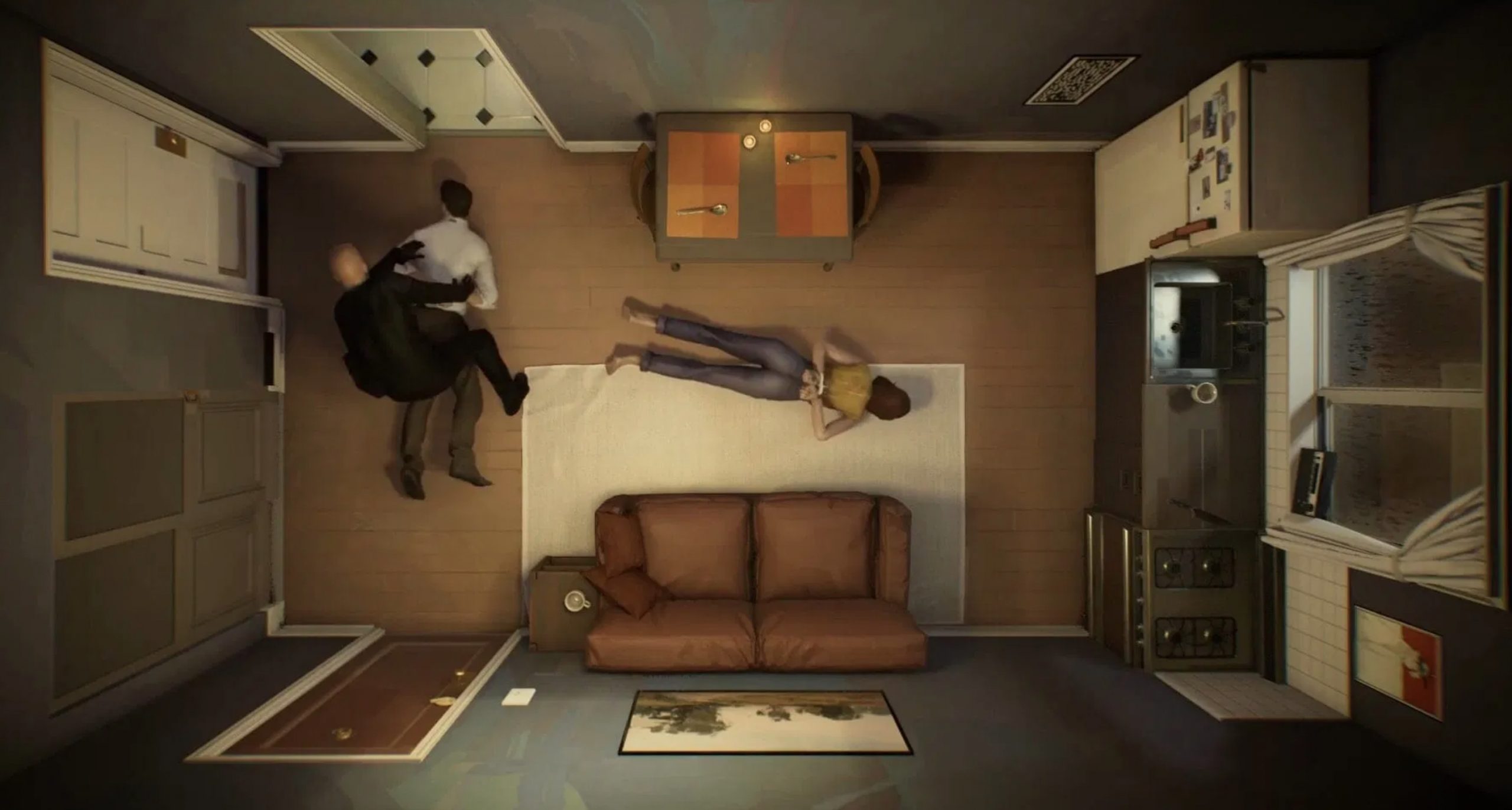 Twelve Minutes is one of those rare games. It’s not our thing but we enjoyed it. It’s definitely a good game and it’s way deeper than players will originally think. It’s one of those games we do recommend players try, especially if you are on Xbox and got the gamepass where you can download this game for free and have a good time time… or maybe a frustrating time. Here’s our quick review.

Twelve Minutes is described as a “top down point-and-click adventure game”. Now if you know anything about Twelve Minutes then you know that you control a dude who is trapped in a time loop.  You have a wife who gets accused of murdering her father 8 years ago by a cop (doesn’t look like a cop to us) who then arrested you both and you get killed. Sounds like a happy story. Players need to break the time lop and find out what’s going on.

Very simple premise. Nothing new or ground breaking but Twelve Minutes did a good job of it. The only thing that got our attention from the trailer was the mystery of the story. It was the “what’s going on here” factor. You enter the game and get use to the point and click. You knowing that you have twelve minutes you move around the area looking at pictures on walls, checking doors but quickly learn the time has started yet. Once you get into your apartment that’s when the clock is visibly shown to start. Players have mixed reactions. You know you only have 12 minutes. Some like X35 Earthwalker himself straight away went around looking in every room for anything and everything, picking up every item and analysing. Some just stayed more still and see what is going on. We liked how the game forced players to decide quickly what they are going to do. The plot twist or plot surprise wasn’t all that hard to figure out. It was clear the wife was hiding something and lying. It was clear the ‘cop’ for the most part knew what he was talking about but off course you aren’t going to trust a willing to murder you stranger over your wife. X35 Earthwalker figured it out before the reveal. We did enjoy how the story got deeper and deeper.

The next thing we liked about Twelve Minutes is how deep the interactions in the game is, especially with objects. There’s a cup, you can pick it up, go to a sink you can fill it up. You can then drink it or maybe give it to someone else to drink… but what does that do? Nothing. You find a plant in the bedroom and get the idea of watering it. Turns out you can water the plant. That’s a nice little thing to do but why? If you pay attention and play through the game you will notice that the plant can wither away and lose all leaves or become lush and full of life. In the bathroom you can find sleeping pills. You can put the sleeping pills in the cup of water. You can give it to your wife for whatever reason or maybe try to give to the ‘cop’. Hey, arresting people can be thirsty work. The same spare key you used to get into the apartment can be used to open a vent cover. That fake candle on the table can be used to light up small dark areas… maybe there’s something you need to find. This stuff gets players coming up with ideas and possibilities. Making some players over think things too. Yes Twelve Minutes requires players to have some IQ to beat this game but what’s also needed is patience. Twelve minutes can be described as a trial and error puzzle game. You can get through it, get it wrong and try again while changing just one thing and find what works eventually. This trial and error is backed up by how things have to be done in a certain order. For example if you call the daughter to have her ask her dad to listen and he shows up but YOU are the one holding the picture the you still fail. If you have to do it all over again but make sure your wife holds the picture instead. Doing one step before the other or selecting one option or whatever will ruin the whole thing. Another example would be if you decide to work with the ‘cop’ and do what he says. If you took his equipment then he will attack you, even if you have what he wants. So you have to do it all over again but don’t touch his stuff.

Now let’s go over what we don’t like. How unrealistic it is. There’s options or things you would do but you can’t. Back to the holding the photo scenario. The wife wants to show the photo but you’re the one holding it. Any normal person would hand the photo to the wife but in Twelve minutes you can’t do that. You try to show the photo, you get your nose punched. How stupid is that. When your character learns the truth. Knows about the watch, knows about the wife’s father and her involvement but when he confronts her with clear pin point information, she still acts like he doesn’t know what he’s talking about. If he said “I know you have a pocket watch”, you can get around that but when he gives accurate information like “I know you have a watch, it’s in the ventilation under the medicine cabinet et in the bathroom” that’s too specific. Yet she tries to act like you’re the crazy one who doesn’t know what you’re talking about and that’s so stupid. He clearly knows! On top of that the dude doesn’t even press her and get aggressive. Like don’t play me for a fool. He just accepts it. Getting all the achievements for this game is stupid as well. Especially when it comes to getting the pictures on the wall achievements and looking at them at different phases and loops. Felt more like a waste of time and at times didn’t Gove you the achievement even when you did it right. There next thing is how telegraphed our character swings with a knife. Giving more than enough time to block or evade like the ‘cop’ does. When you have a knife you can’t do big moves like that. Straight line strikes please at least.

Speaking about the knife, here is our number one most hated thing about Twelve Minutes. It’s an actual fail that breaks and ruined the whole premise of their game which is the time loop. Hear us out. When you try to fight the ‘cop’ with a knife. You do the telegraphed knife attack, get blocked and then knocked down. Okay we get that. The ‘cop’ is a better fighter. So X35 Earthwalker had a brilliant IQ idea. It’s a time loop. It resets for you, keeping your memory and everyone else doesn’t detect anything. Those previous loops never happened for them. This means the ‘cop’ has never fought you before. Yet you remember the fight. So what X35 thought was that if we fight him again we will know his moves and counter them perfectly. This actually worked which made us praise the game for this awesome mechanic. Our character learns! So when we fought him again, he moved his blocked hand and got a stab in. You then get combo-ed and lose. We fought him again and this time dodged the attack after we stabbed him, but then got head butted. Next attempt we moved our head pulled out the knife and got shot in a quick draw. We attempted some more and there’s a series of moves. It looked like maybe the next attempt would work but then the game does something real stupid. When you go to fight him again, instead of us leading with the telegraphed swing, he does an instant right hook to knock you out. That breaks the laws of time loop. The ‘cop’ can’t change his actions as according to him, this is the first time he is facing our character. He doesn’t know about the 8 different times we attacked him and fought. He doesn’t know we are learning his moves. So like the wife saying the same thing every single time, he should the same moves every single time. This really made us annoyed and dislike Twelve Minutes for a while. We actually thought we were on to something. Instead the game wasted our time and took away an opportunity to reward players for persistence and thinking outside the box. This whole game was about thinking and using your head to dove things through the fact that you are in the time loop and your knowledge from previous loops. They took this victory away from us for no good reason. How stupid is that. The game doesn’t want us to kill the ‘cop’ like that but why does that matter since you can kill him in another. You can still kill him. Whatever. Even CoryxKenshin felt the same way in one of his latest videos. Watch from 15:20 to 17:55.

Overall Twelve Minutes is a very good game. It’s nothing too serious. It’s not a long game. It has mystery, deep mechanics but it’s fun, can get frustrating but that’s the style of the game. When you solve something, you realise you was close but missing something so simple and at times small. It’s available off course on the Xbox game pass too, so it’s easy to get regardless. It’s a cool experience and many big content creators have gave this game a try… because it’s trending and they want views but that’s besides the point. We enjoyed Twelve Minutes. Now Twelve Minutes might have a time loop but not even time loops effect… the ‘Earth Walk!’