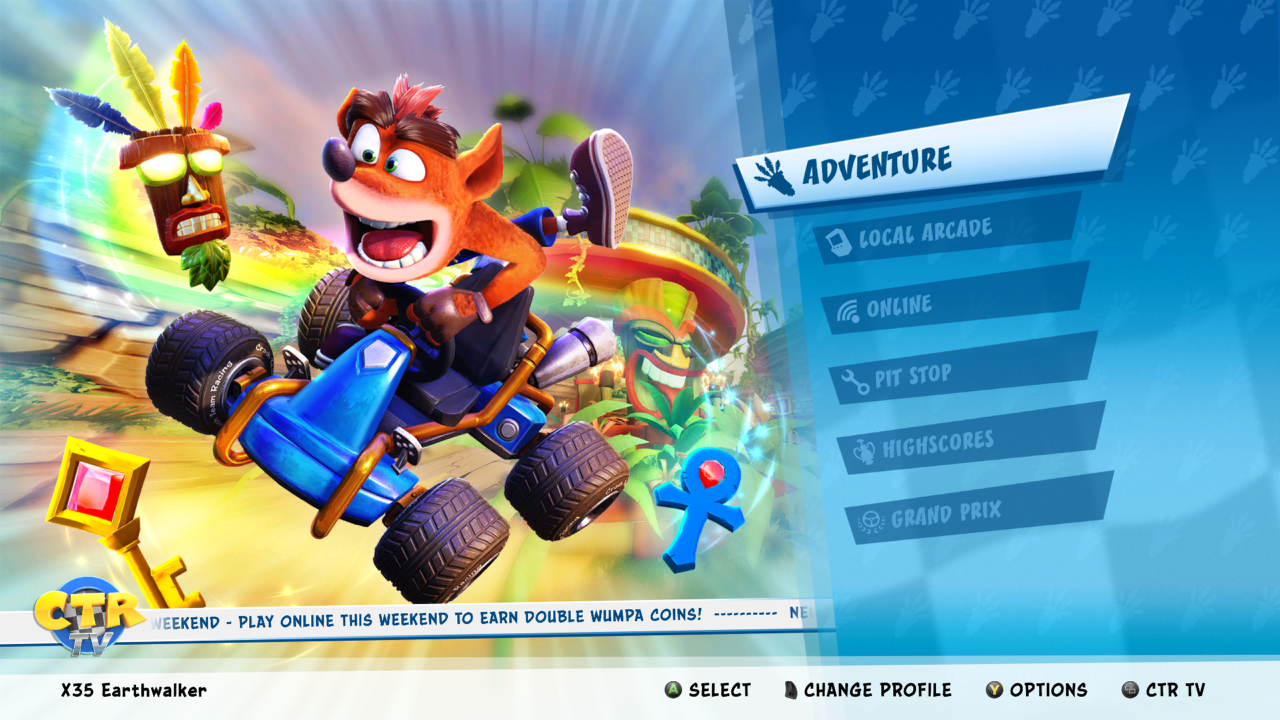 Crash Team Racing Nitro-Fueled is one of those games that many people have been waiting for. Even X35 Earthwalker himself was looking forward to the day when the Crash Team Racing remake would come out. It was described as a smashing blast from the past. If you did play Crash Team Racing in the past then you have to give this a try and see fro yourself… but what did we think? This is a nice review. Let’s take a look. 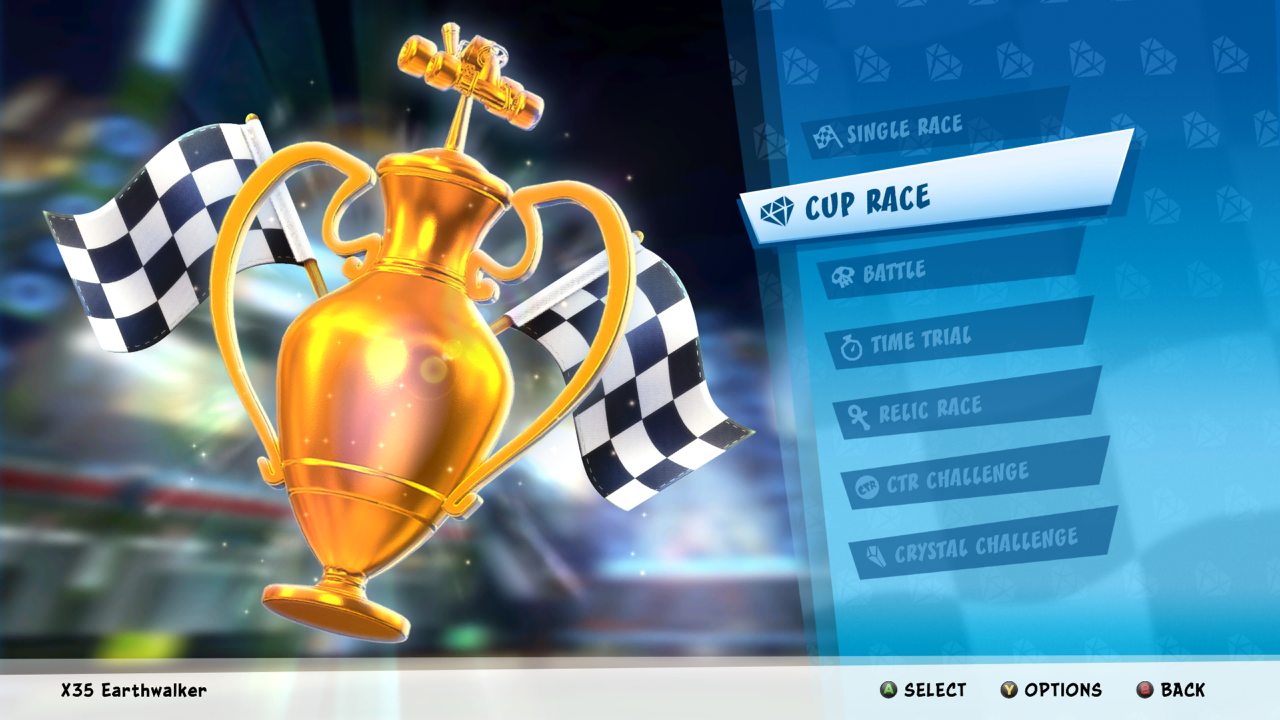 Now straight from the start, original Crash Team Racing gamers will notice that the starting screen isn’t the same. In Nitro-Fueled, Crash comes up from off screen to grab the trophy while in the original he was always on screen within reach of the trophy but that’s just a bit of trivia for you (impressed yet?). Now straight from the main menu the game practically reveals all the modes and tracks it has to offer. Crash Team Racing Nitor-Fueled has all the original tracks plus the tracks from Crash Nitro Kart which was a smart move. We know for a fact that there will be no Crash Nitro Kart remake as Crash Team Racing was the more popular and succesful. Still was a great game though. Overall Nitro-Fueled has lots of content for players and the menu makes that clear.

Let’s start with adventure mode which is the main meat of the game. It’s just as we remembered it. Four tracks per area, win a race and get a trophy then you can’t renter until you get the boss key of the area. Once all four tracks have been won, the boss will emerge and challenge you to a race. The animations for the bosses, their introduction is very well done. We were happy with them, especially Ripper Roo. It just showed how crazy he really is. If you are new to the game then you need to do some practicing on the area track and get some skills. You need to get your head checked if you think you can be a beginner and beat Ripper Roo. Then everything else played out just like the original. The remake was faithful to the original and the animations really added some new flavour and personality to the characters. Now let’s quickly talk about the graphics. The graphics are excellent. We remember the old looks of the levels and seeing the new looks were amazing. The best looking track has to be Coco park. They made that place look awesome like we want to visit that place, as long as there’s no racers nearby hurling bombs and homing missiles. By the way, how comes Coco has a whole major awesome park for herself, with statues of herself and more? 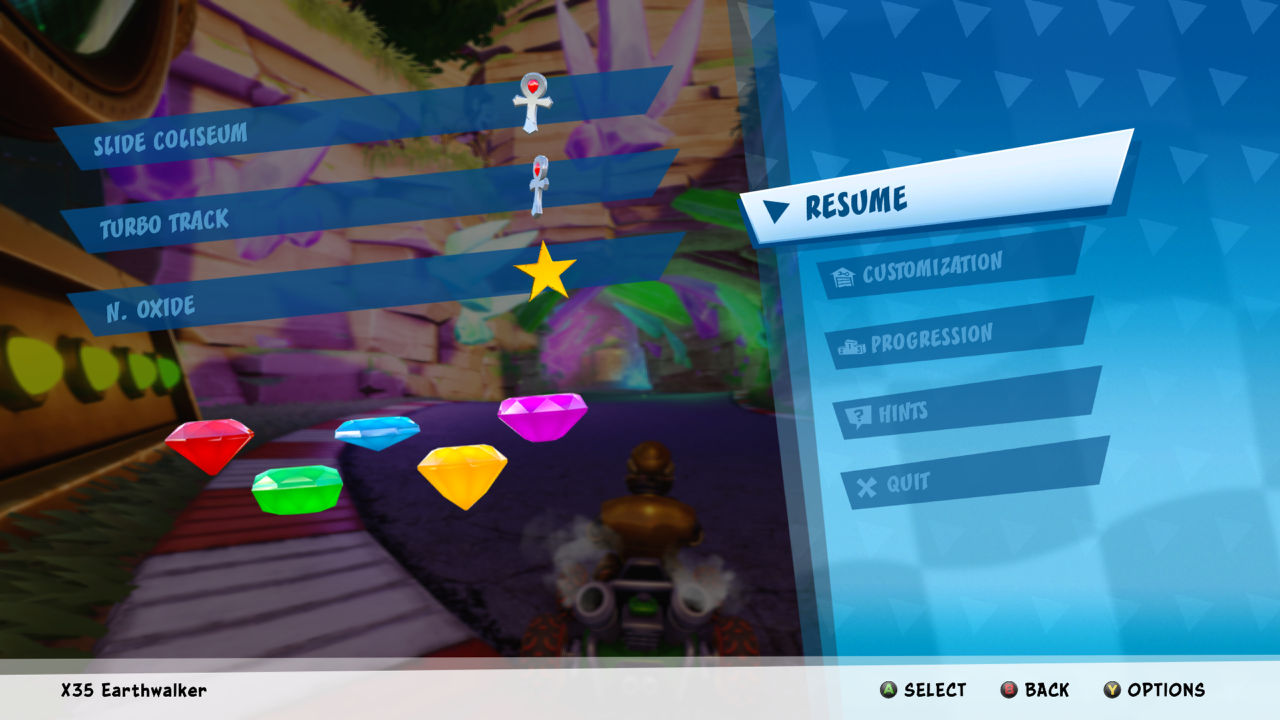 Many players like to jump straight into online modes. You know how these kids are these days, they beat Oxide and suddenly think they are fast. You can do online battle or race in Crash Team Racing Nitro-Fueled. The main thing is off course racing as that’s what most did with the original. Battle was fun but it’s very different from what you get in the adventure mode. Online matches are also the best way to earn wumpa coins. Average races and modes in adventure mode only offer from 80-20 coins. That’s lame as the items that actually matter cost a minimum of 1500. Winning an online match can get you 300, sometimes more and sometimes less. That’s a big difference. Even coming second can get you 165. The problem is winning though. If you suck, then you won’t make as much. Also online is where the real matches happen. X35 Earthwalker, the one true Earthwalker, the legendary soldier himself has dominated online. There are some players who are here to just have fun. There are some who want to win and rely more on items. There are those who think they are fast and get real salty and send messages when they lose. Lastly there are those who’ve got some speed. We’ve had some serious races but so far, no one better than X35 Earthwalker. So basically online is where the real action is at. It does take a bit too long to find a match and takes longer to actually start the match. 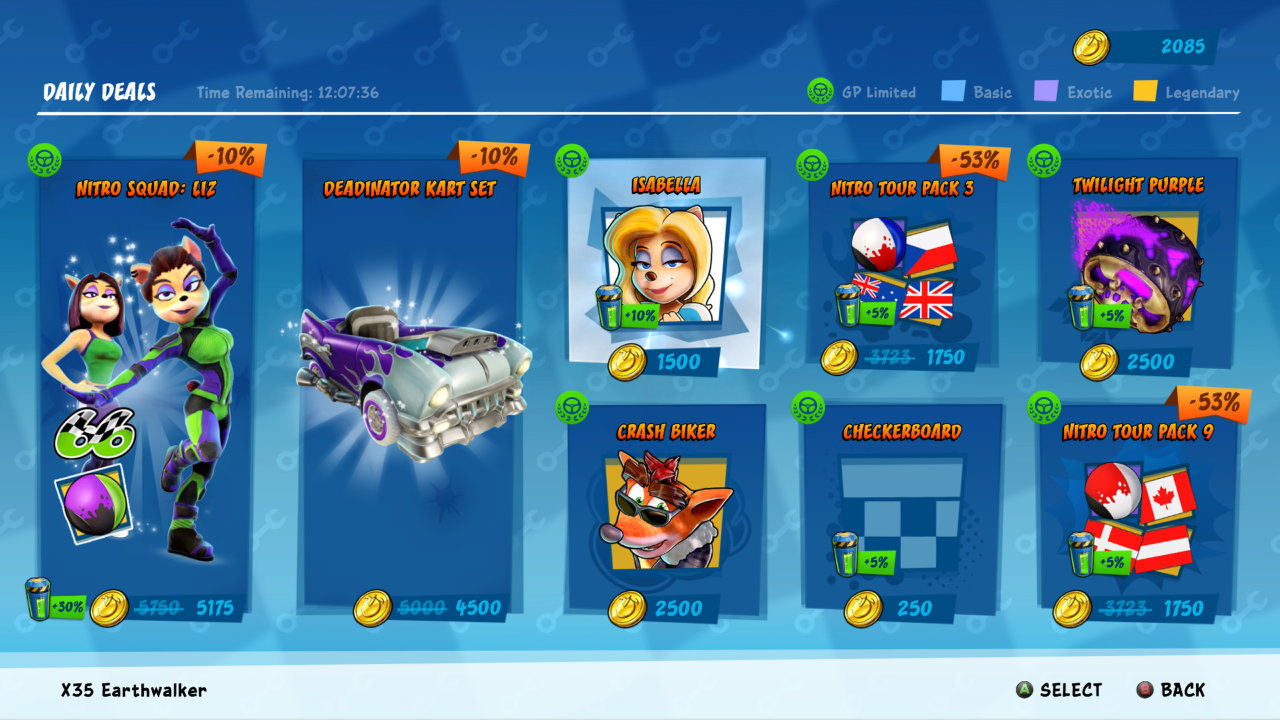 The Grand Prix content that recently got added to Crash Team Racing Nitro-Fueled brought in a bunch of new stuff that really reveals where the name nitro fuelled truly comes from. Sort of like a battle pass, players can earn nitro to fit up the meter to unlock rewards like vehicles skins, paint jobs, stickers and even new characters. What we were happy to see is the return of Chick and Stew from Crash Tag Team Racing. They are bringing the reports as never before, except Stew isn’t getting a new funky hat every time the camera comes back to him… what a shame… BRING BACK THE HATS! The gran prix also brings in new tracks never before seen. Whole new race tracks. Now we was going to list this next thing under everything bad about Crash Team Racing Nitro-Fueled but the Grand Prix saved the game. The Bandicoot girls are back. So happy to see them again. Ami, Megumi, Isabella, Liz and Tawna (Tawna wasn’t in CTR) are all here and ready to race. When we didn’t see them in the original release of Crash Team Racing Nitro-Fueled, introducing and applauding the victor of the races we were not happy. We remembered them so clearly and they were a part of the whole thing especially since each girl was assigned to a racing team. A different girl who show depending on the character that wins. Now they are back and geared up. It would have been better if they made it so that either by meeting certain conditions or whatever reason each of the girls who show up one by one challenging the player to a one on one like how Super smash bros Brawl did new unlockable characters. Off course make each of the girls have their own difficult going from easy to extremely hard. Just an idea.

Now Crash Team Racing Nitro-Fueled is definitely harder than we remember the original being. Definitely watch the above video to see what we mean. The difference between medium and hard difficulty is crazy. When we play medium, the A.I are too easy but when you play hard, the A.I are ridiculous. Remember that the gameplay video above is gameplay of X35 Earthwalker’s first ever races on the game, so was still rusty. Even getting the relics seems to be harder, we could be wrong but that was years ago. Well getting the sapphire and gold isn’t hard… it’s the platinums that all the noobs and beginners can only dream about (don’t get mad guys, just joking) but seriously they seem harder than we remember. Well not all tracks are created equally as some like Tiny arena allow for you to make it in with time to spare while others like N Gins lab has no forgiveness and require near perfect execution of crate smashing. The rematch with Oxide also seems a bit harder than before but once you get in front of him, he’s a complete push over. Fans and critics are divided understandably. Some say that it’s too hrs but that’s mainly coming from those who never played the original before. If you are new, then you really need to practice first. You won’t stand a chance against the real drivers who are online. They will do some bad stuff to you… stuff you can’t even talk about. Seriously we’ve seen players been left far behind the group simply because they are just learning. Online isn’t for learning. Then there are the layers who seem like they’ve been playing the original crash for the last 15 years, training for this remake… off course they say the game isn’t hard. So most the options come from Crash Team Racing history.

Now let’s talk about what the remake did wrong or was not so good. We noticed that you have less control over your power slides in Crash Team Racing Nitro-Fueled. It feels harder to control. We just had to get use to it. We knew the remake wouldn’t be able to fully replicate the exact feeling of the original. The hit detection with walls and surfaces seem worse than in the original. We find ourselves during our first races colliding and being shown down by walls when it looks like we aren’t even touching it. Again this is something annoying but something you have to get use to. Even though they brought them back as race-able characters they still weren’t part of the original release of Crash Team Racing Nitro-Fueled to congratulate the winners. If Crash Team Racing Nitro-Fueled is suppose to be a remake then include everything the original had… simple. They were a part of the game and everyone remembers them. They should have been there. They should have had a cinematic feature where you can rewatch the new cutscenes concerning the bosses as they were great and fun to watch. Beginner characters like Polar, Pura and Liz are discouraged as you get good at the game. Their low speed makes it too hard to compete with excellent racers using high speed characters like Tiny, Dingodile, Ami and Papu Papu. X35 Earthwalker was in an online match and faced a good Papu Papu racer. He was always slightly ahead to due to the difference in character top speed, not skill. In the next race when X35 changed to playing Crash he beat that Papu Papu player without any real problems. The problem is the character speed. The beginner characters are not fast enough. The characters should have no set stats but maybe the vehicles have stats but if they do that, then it’s not an exact remake. So either way beginner characters not valid for good players (that’s why they are called beginner). We don’t see them online (hardly).