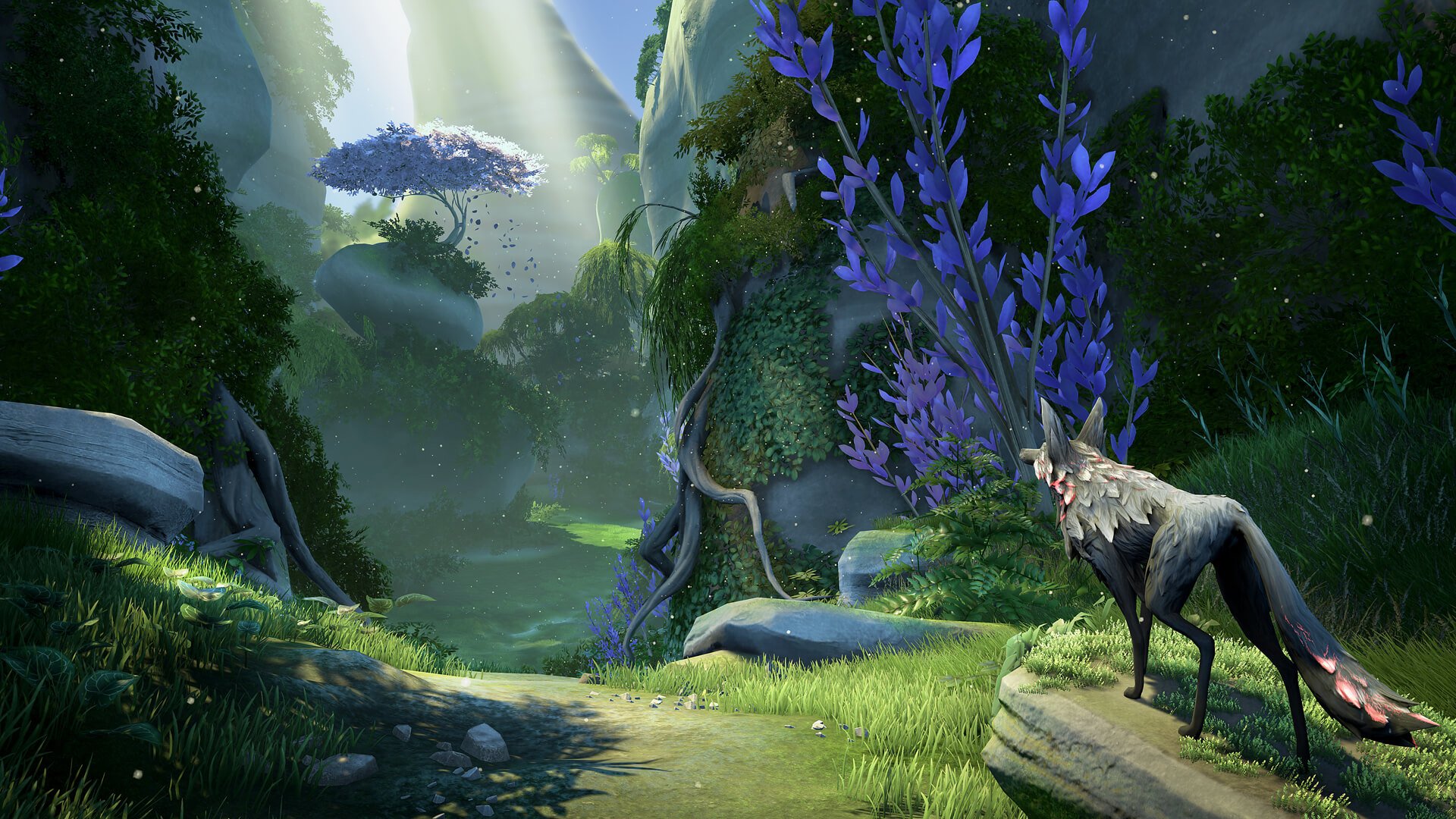 Lost Ember is a new adventure exploration game developed by ‘Mooneye Studios‘. It is coming out in spring  2019 on the Xbox One, PS4 and PC (and Windows 10). Lost Ember has gotten lots of attention. It has even gotten lots of nominee and won some awards already. Let’s check this out.

In Lost Ember, players get to explore a world that has been taken back from mankind by nature. So don’t expect any people around here. Players control a wolf but not just any wool. This wolf has the ability to inhabit other animals and control them. This is where the different perspectives come from. First of all how comes this wolf has the power to control other animals? Did this wolf use to be a person? A nature mage or something? Hopefully the game explains this. 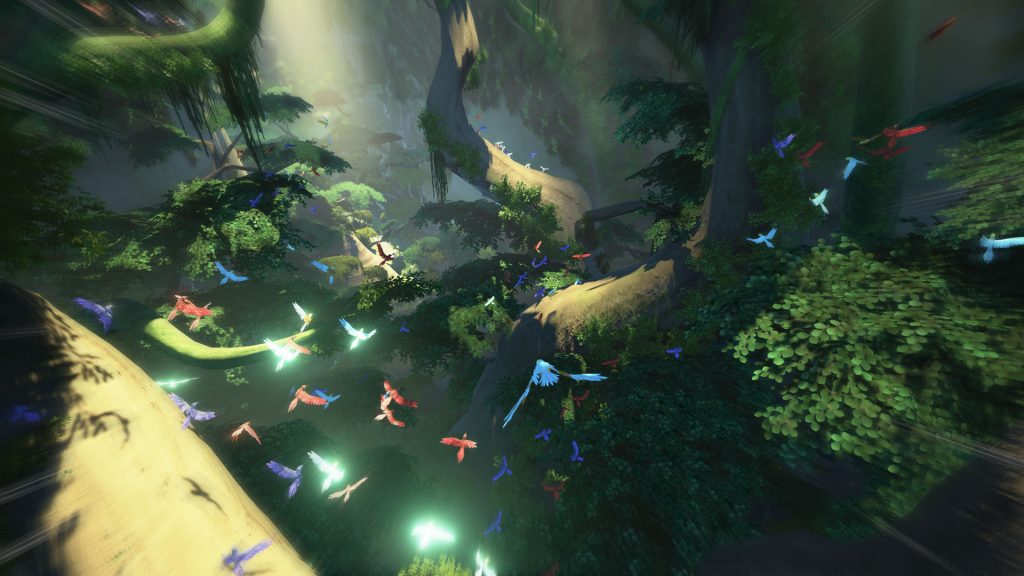 Off course, since this is a exploration game and man is gone, there will be ancient cultures, ruins, forgotten civilizations and more for players to check out and learn what happened, secrets of this world and what’s going on. So being a wolf has the obvious advantages of being fast. So you can cross areas quickly and get from point A to point B. You will come across areas where the wolf cannot go, like high ledges for example. Taking over a bird solves this problem as you can then fly up to see what’s up there.

Control small animals to go through tight spaces, control a fish so that you can explore the waters because wolves can’t go that deep with dying. Even control moles who then can dig underground. Who knows, you may find a cavern or a diamond pick axe (get it?). Either way the main concept of the game is clear and simple. Run around and explore but if there is somewhere the wolf can’t go then control the right animal for the job. Simple. Explore and learn about this mighty civilisation that has fallen and learn about certain characters from the past. 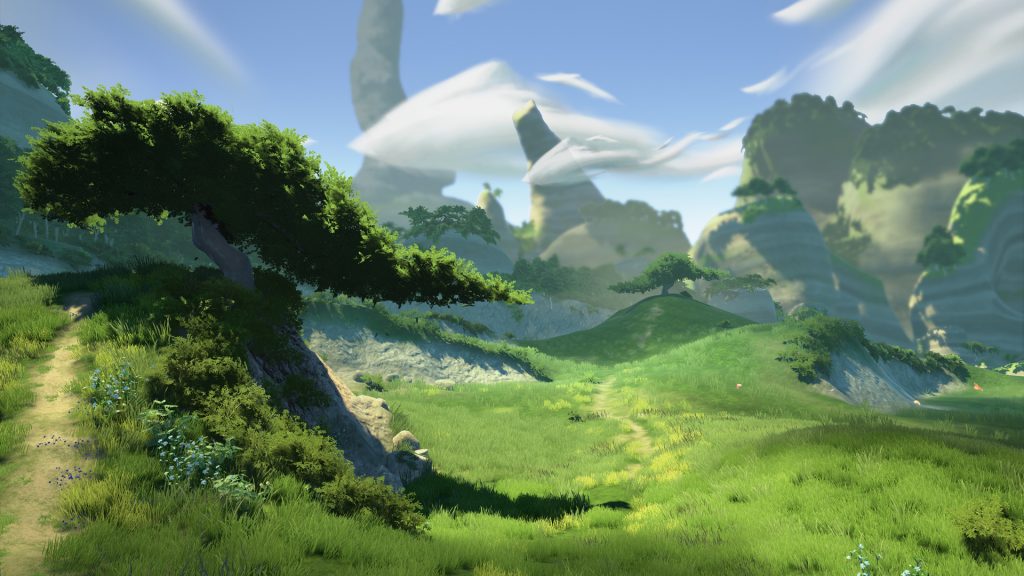 Now let’s talk some details because games like this, we are sure you know the formula by now, so there isn’t much to really say about it. It’s an exploration game with some mystery. Lost ember is built using Unreal Engine and they did a good job because the looks and art style is one of the main things that got so many people’s attention. Many have said it’s a beautiful game and others have made some really big claims about it’s beauty (calm down now).

Lost Ember will also be compatible with VR (Virtual reality). People have asked and they delivered. The game has been tested with HTC Vive and Oculus Rift and according to the developers “it’s awesome”. They are also looking into being compatible with PlayStation VR. Lastly gamers can pre-orderfrom two options: the regular where you get a digital copy of the game and two karma points which you can spend to unlock free rewards. The digital plus bundle gives you a digital copy of the game with the digital soundtrack and art book along with 4 karma points. Take note that pre-orders for windows is only available right now.

We checked out some gameplay and it’s what we expected. We expected a colourful world, lights, animals and fictional stuff like creating structures a light companion etc. It looks very nice. Not as impressed as those critics were though. This game reminds us of the other exploration games we have already written about. We haven’t seen anything that makes us want to play Lost Ember though. Fans of exploration will probably love this and rightfully so. Once again it’s down to the gamers and their taste.

Overall lost Ember looks like a good game. Designed well, people waiting for it, supported and will have VR. Definitely got some stuff going for it. It isn’t our thing though and we believe it needs more going on in the world for it to be exciting. Exploration doesn’t mean that’s all the game should have. It needs to stand out from the others. The developers ‘Mooneye Studios’ clearly did a good job with this game. We at X35 Earthwalker are not looking forward to Lost Ember but we know for a fact there are some who are. Now lost Ember has a wolf that can control other animals and that’s cool but it’s lame when compared to… the ‘Earth Walk!’