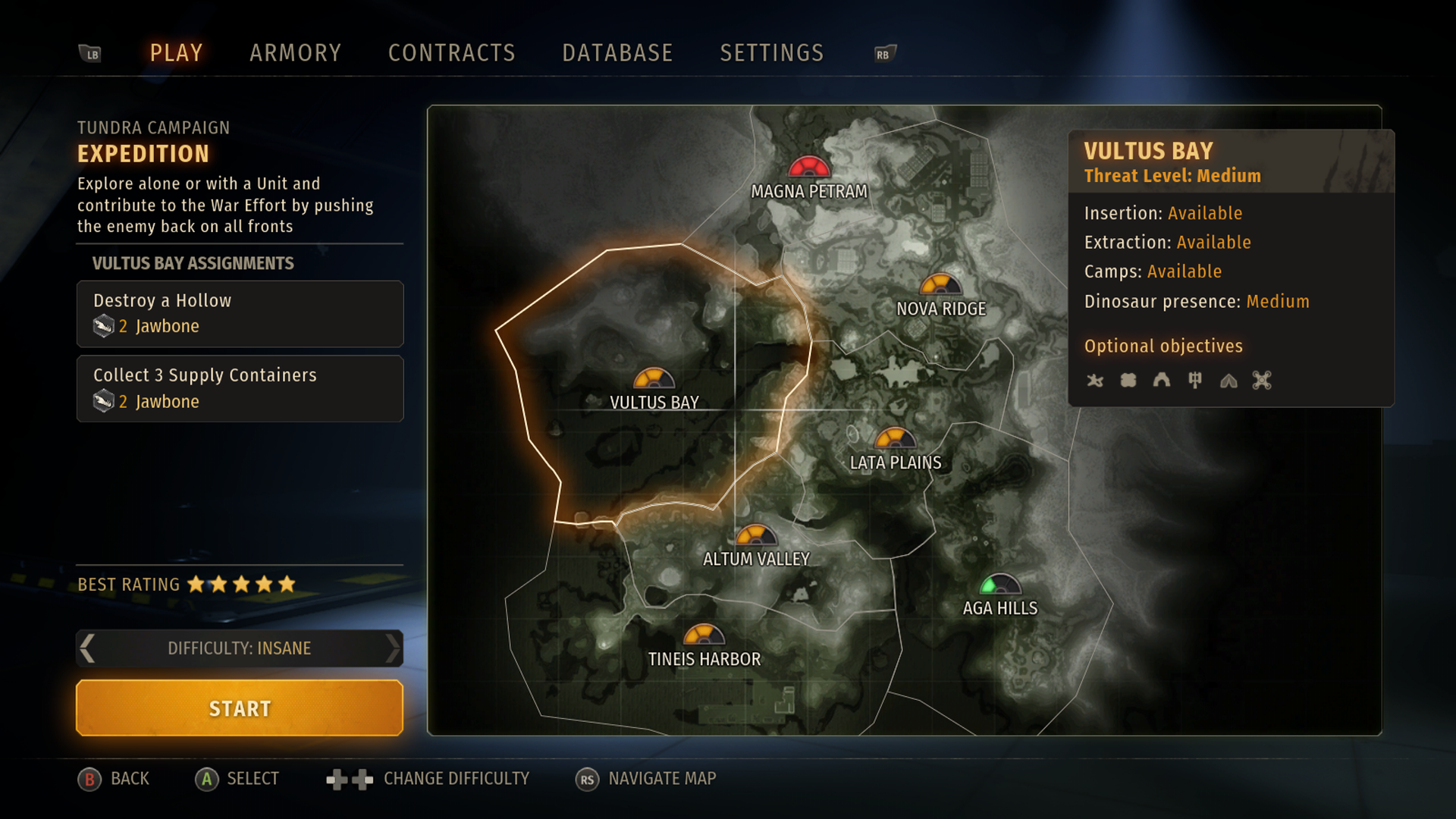 Second extinction is an awesome game. We at X35 Earthwalker love it, spend many hours in it, both solo and with random players. It’s best played with others but you can still go at it solo if you are a mad man/woman or you are super brilliant like X35 Earthwalker himself, but for you the reader it’s most likely the former. Just saying. Stop being triggered and read this thing. We have a few quick things to discuss here and it’s mainly about what others have said or done concerning Second Extinction. By the way we will do our own review as well. Let’s take a look.

Firstly we want to trash talk a lot of gaming websites that have the laziest low intelligence bum writers. Whoever runs their websites should quit. They suck. Here’s why we say this. X35 Earthwalker one day wanted to see other peoples opinions concerning who the best character in Second Extinction is and why. Normal stuff. He goes online and sees a website with terrible and inaccurate information concerning the weapons and characters. He goes to the next website and funnily enough that site has the exact same text as the previous sites. He went to another site and it also had the exact same ‘copy & paste’ text as the previous two. How lazy and lame must you be to just copy and paste the WHOLE thing. We ain’t pathetic wusses like many youtubers, we are giving the names. Here’s just some: gamepretty, gamesgds, steamlists, gamesutra, gameplaylists, gameplay, steamah and guiasteam. Sure these sites are small and not very good at all but there were real easy to find when searching for the best character in Second Extinction. 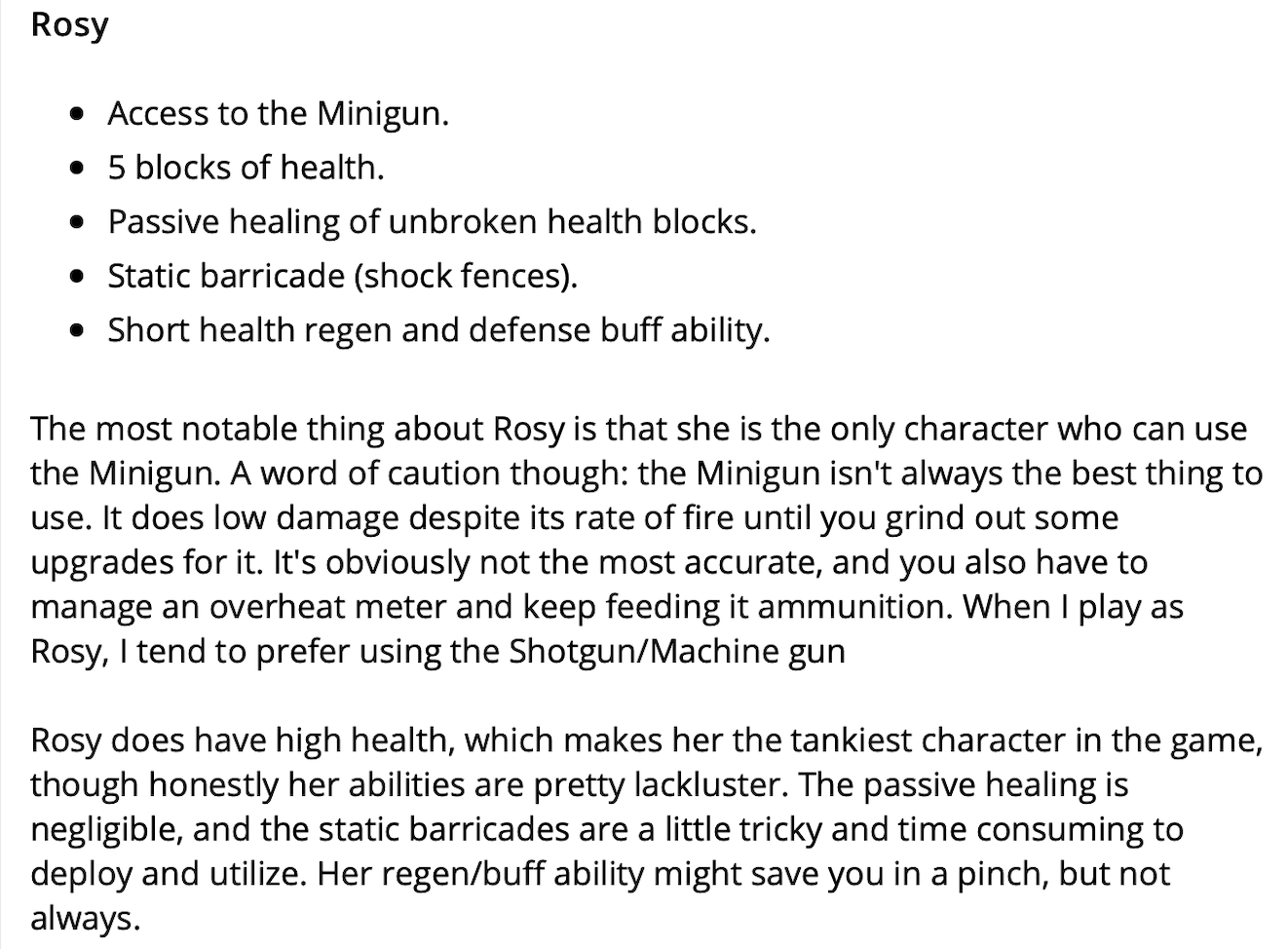 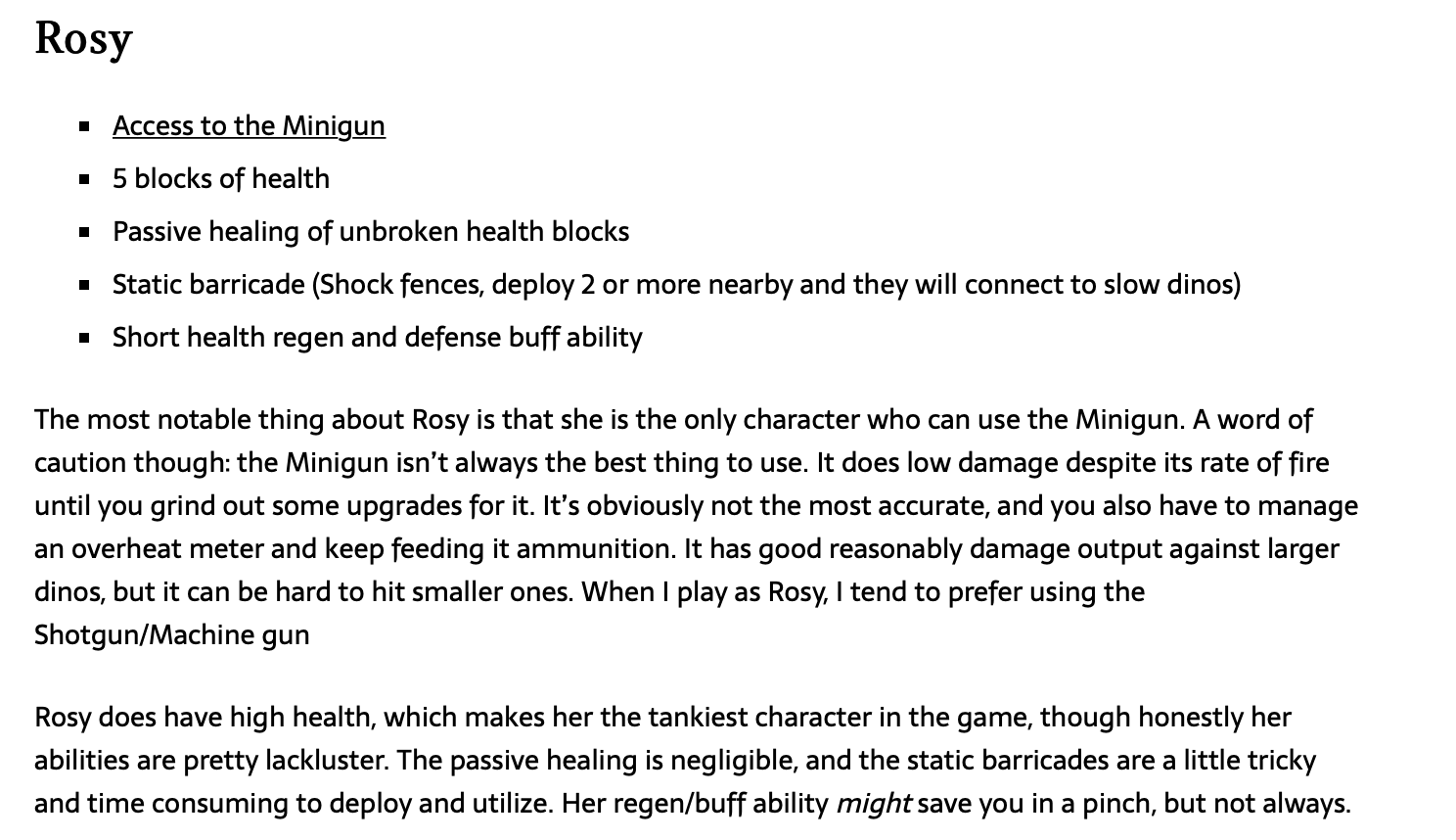 Above are just two screenshots of the text. We have screenshots of all the websites but this is just the text on the part about Rosy. The whole thing about all the characters is exactly the same. The one on the right (steamlists) adds one more sentence but everything else is still copy and paste. We will have to write our own character tips and ranking of them for you guys since as you can see others are useless at it. The problem isn’t only the copy and pasting but how bad the information is about Second Extinction. They claim that the minigun isn’t always the best thing. We have played for hours and used Rosy the most. There statement is false. The minigun is the best weapon always. It’s damage isn’t low, it truly shreds enemies as it should be. It’s powerful without the upgrades. Without any upgrades the minigun beats all other weapons. 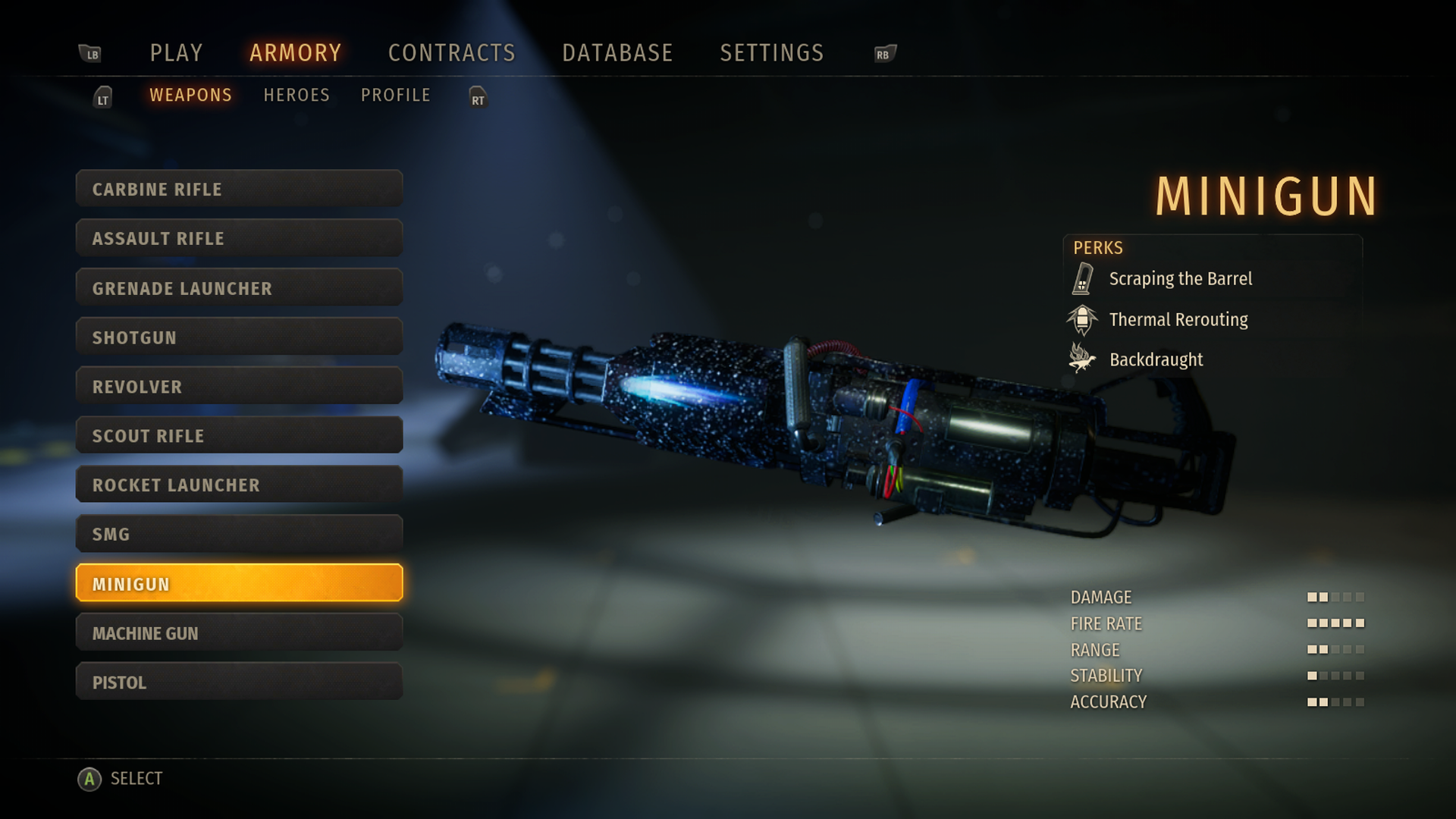 When weapons are upgraded, the gap gets smaller but the minigun is still the best. The overheat isn’t a problem since the weapon cools down fast and there are upgrades that let you use the overheat to your advantage. For example there’s an upgrade that as your minigun gets hot, your bullets inflict fire damage and sets dinosaurs on fire. There’s another upgrade that when you completely overheat you release a powerful area of effect flame blast that damages and sets enemies on fire all around you. So overheating isn’t bad now. They said you need to “keep feeding it ammunition.” Duh! Well obviously. All guns you need to feed with ammo. No ammo means you can’t shoot. So that’s stupid of them to say that. Lastly the image on the right says that “it can be hard to hit smaller ones”. No it isn’t hard to hit smaller dinosaurs. With the high rate of fire it’s easy to hit them. 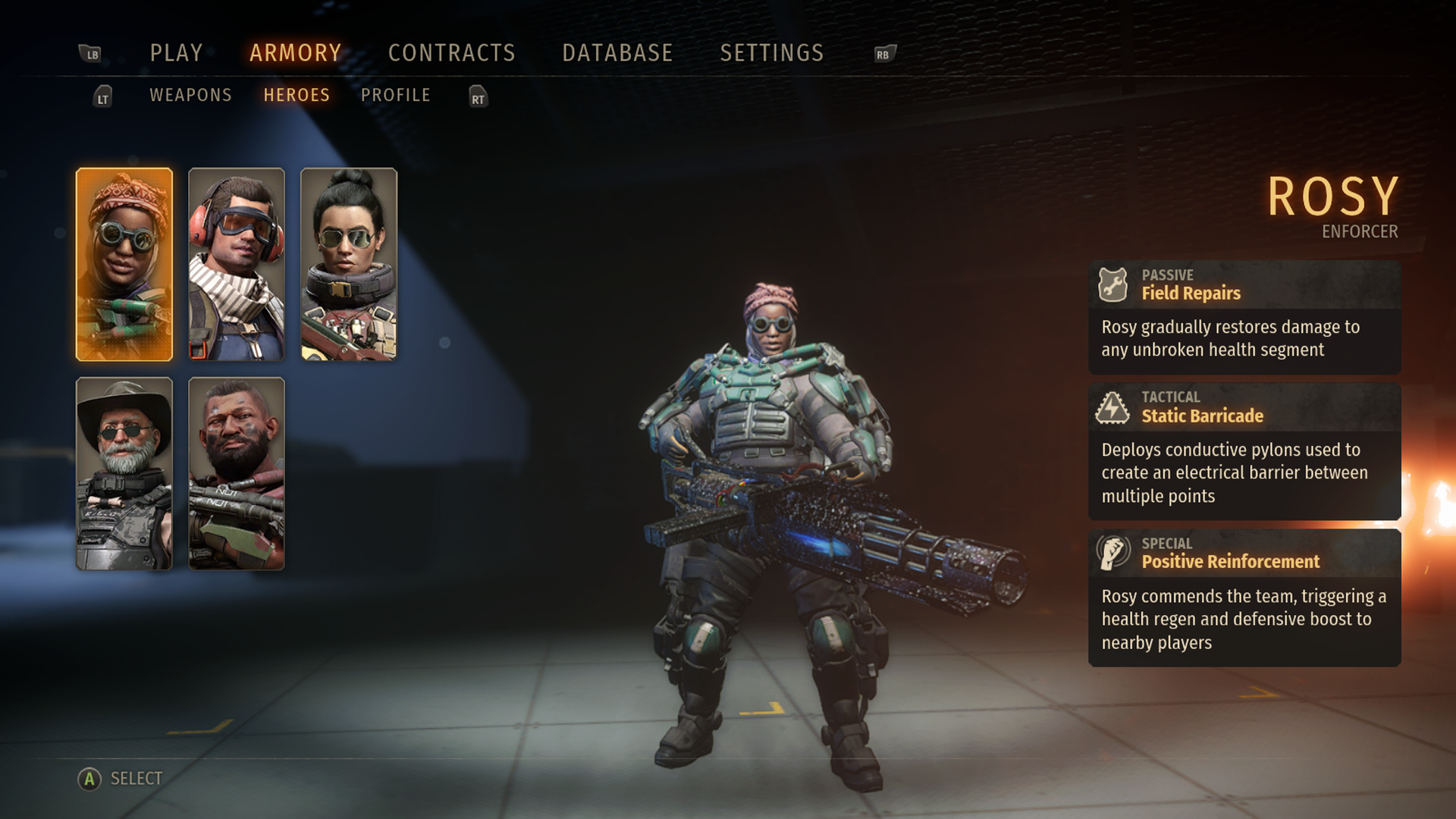 Lastly we want to discuss what it said about Rosy as that’s just as bad as what they said on the minigun. They said Rosy’s abilities are lackluster. What?! Do we forget about how Rosy be standing in the middle of a horde of dinosaurs and be destroying them all and surviving at the same time? No character can do that. The passive ability is not “negligible”. That passive ability helps keep you alive and saves you on med kits. If you don’t lose a whole health block, you will regenerate it back. That means you can save med kits until you truly need it. Other characters can’t do anything about their health. Remember you only can hold a maximum of 3 med kits in Second Extinction. The static barricades are easy to place and use and make a huge difference in a fight against a horde of dinosaurs. The developers need to improve responsiveness of controls though. Switching to grenades and placing static barricades suffer from bad responsiveness here. Lastly they said the “regen/buff ability might save you in a pinch, but not always”. Sure, true but of the original characters, Rosy has the best chance of saving your life. Your health gets low, activate Rosy’s ultimate ability and you get full health even when being attacked. It’s very strong. It also heals your team too. Her abilities are far from lack luster.