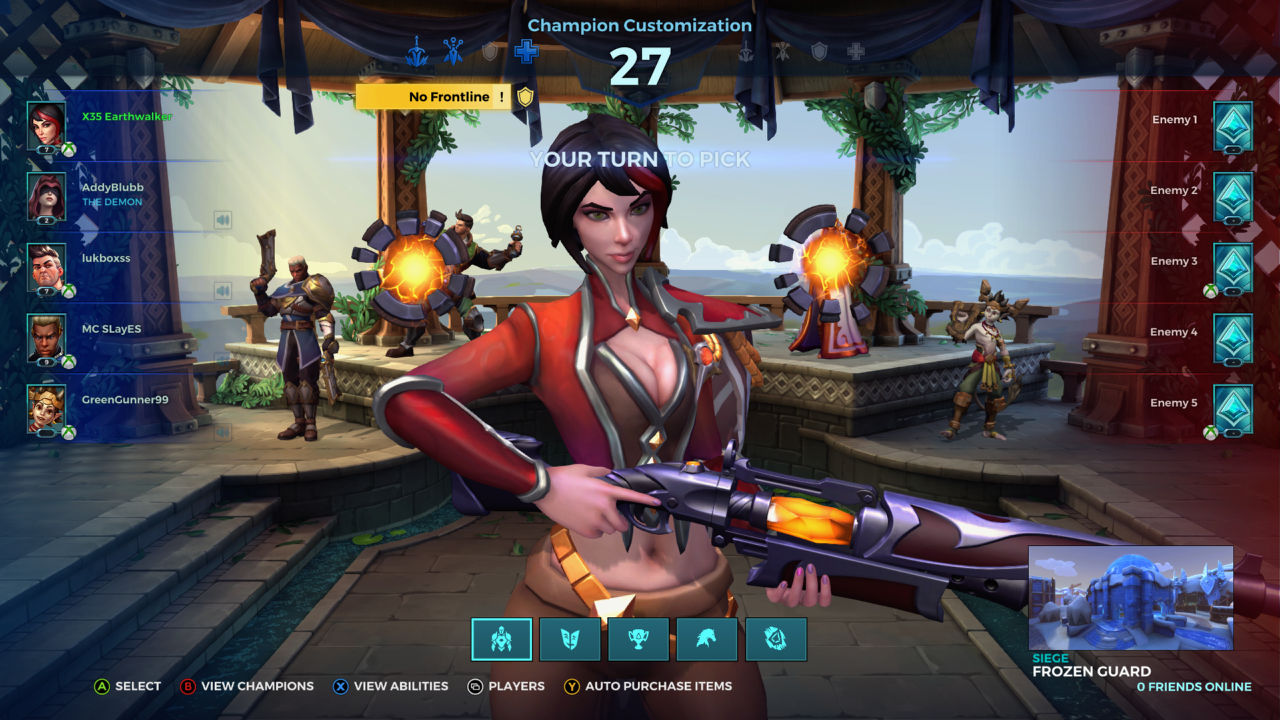 Paladins is a team based shooter game developed by ‘Hi-Rez Studios‘. Paladins, Champions of the realm is one of those games that X35 Earthwalker himself got into, sort of recently. So far we have had a fun time but there’s quite a lot going on. Take a look.

In Paladins, two teams of five champions go head to head to either out slay the other or generate and push a payload to their enemies side of the map. Sounds simple but there are many factors to this. There are a bucket load of characters to pick from and each one has a role and their own abilities. The roles are: Damage, flank, Support and Front line. Damage is well… all about dealing damage. Flank are all about getting around and hitting the enemy from the side of behind. Support do anything from buff and heal allies and nerf enemies. Front line are suppose to be tacky (take a lot of damage) and stay in the front grabbing attention.

So the main strategy in Paladins is that the front line goes for the payload and stands in the area for the objective. The support strengthens and heals the frontline to keep them alive. The flank splits the enemy teams’s attention by attacking them from their side while the damage dealer tries to finish destroy everything. Off course, the enemy team won’t let you do that. So you have to keep an eye on their flank, shut down their support and avoid taking damage dealers head on. There isn’t that much variety to the maps to play on but they have been carefully designed and each one off course presents different opportunities. Some maps are more suited for some champions more than others. Make sure to lay all and know what’s best for what champion. Experience is key in Paladins.

Each champion in Paladins has their own abilities. 4 fixed ones, one ultra and one you which is more like a perk that you must keep for the whole match. No characters in Paladins are really similar, despite what haters say. There are three Champions who use rifle like guns: Viktor, Tyra and Vivian but each of their guns have a different rate of fire, clip size and damage per bullet. There abilities and uses truly separate them. Viktor can throw grenades for additional area of effect damage and run very fast to chase down enemies or retreat quickly. Tyra has a grenade launcher which is area of effect damage and fire bombs which sets the area of fire for area denial. Vivian has a frontal shield that takes the damage for her and sensor drones which reveals the locations of enemies in a big radius.

Now just from what you heard about these Paladins characters, you can see where they shine most or come up with different play styles; however there is more. For example if you select the cardio perk ability Viktor heals for 250 health every second while using hustle. So players can chase down enemies knowing that they will have more health than them; or run away while healing making it harder for you to die. If you then use the right card in your load outs you can grant damage resistance during the hustle to make you much harder to kill while chasing or retreating. With Tyra you can use many cards in her load outs to make the fire bomb ability cool down much faster and then combine that with the ‘Burn monster’ ability and she can pretty much shut down a payload objective as no one will want to stand there at all. So come up with some combos. 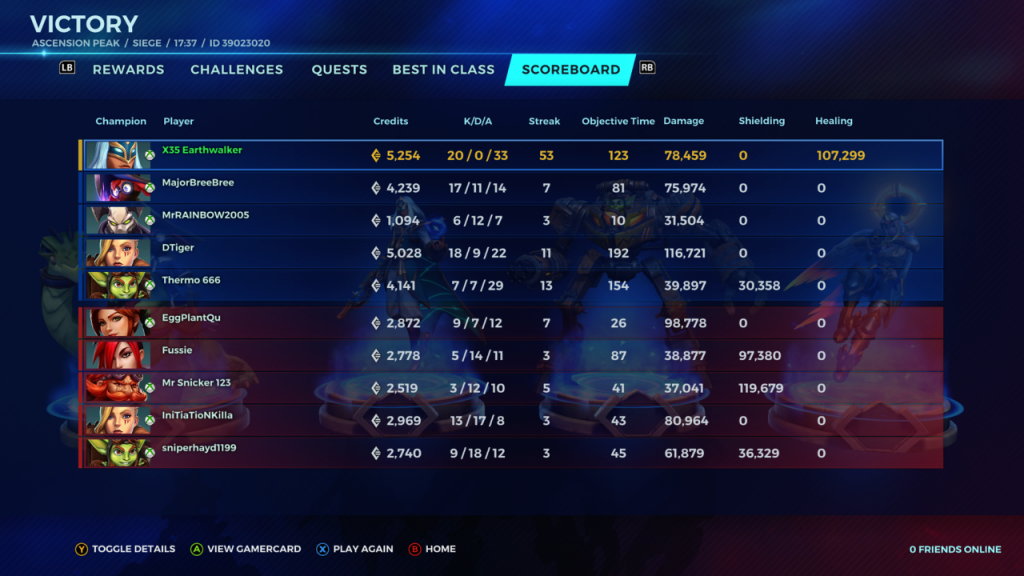 So you can imagine the many different play styles and strategies that players can come up with the many different champions. Who knows you may even be able to stand up to X35 Earthwalker who has been called the greatest Jenos player in the world. What’s really good about Paladins is that players can see the statistics for the damage of their attacks, how much percentage does damage reduction grant and life steal etc. This makes Paladins quite mathematical. You can actually calculate who would win in a straight up fight through maths alone or know how much of what is needed to survive an attack or take someone down. So those who paid attention in school will have a definite advantage here. For example Buck’s shotgun does 700 damage per shot and rate of fire is one shot per second. So if you got level 3 damage reduction Buck’s shotgun will instead do 490 damage to you. Meaning if you are let’s say Tyra, it will now take you 5 seconds to die to buck instead of 4. That extra second sounds small but in Paladins makes a difference.

Off course a game as statistically and large like this will always have problems with character balancing. Some characters seem to outshine others while some are too powerful maybe. For example many have a problem with Maeve. Her daggers deal 400 damage each. You throw both at the same time which means 800 in total. This means she can kill Vivian within 3 seconds. Others take 4 seconds. Not only that, she has an ability called Artful dodger, where activating nine lives heals her for 400 but then combine her pounce, which nine lives can reset the cool down of by the way, she can deal and extra 800 quickly meaning she can kill someone like Skye in slightly under 3 seconds. Now that’s fast, too fast. Buck is another character that some have something against. He deals 700 damage as we already discussed but can also heal himself 1000 over 1.5 seconds but if you use the a bulk up ability you heal for an extra 600 and your maximum health increases by 300 for 3 seconds. There are also multiple loud out cards that grant damage reduction to using Recovery and Heroic leap meaning Buck becomes one of the most difficult things to kill while dishing out so much pain. Worst of all both Maeve and Buck are FLANKS! They aren’t damage types.

Which brings us to the next issue. Flanks shouldn’t be able to out damage, damage dealers. Damage champions should be the ones that you don’t one to 1v1 against as you should almost always lose. We have seen Maeve and Buck out damage and kill damage characters in 1v1 and not by catching them off guard which shouldn’t be the case. Flanks should either have low health and second highest damage or medium health but really high mobility to run away and come back later to harass the enemy. Oh well, we aren’t the developers. Lastly for now, we don’t like how long it takes to level up your character naturally. We know you can spend earned gold to level up faster but that’s not how we roll here at X35 Earthwalker.

After playing Paladins for a good while we can say this it’s an excellent game. Always a lot of fun and different things to try. Some characters are clearly harder to use than others. Terminus can be very difficult and match up is everything for him. If you are Terminus and your opponents are Viktor, Lian, Buck, Tyra, those with guns then you are going to have a good time as they get countered by Terminus so hard. We have learnt and discovered so many cool things that there is multiple reasons to keep playing this game this. The good certainly outweigh the bad here. We’ve never had any interest in Overwatch and Paladins but now it’s clear we prefer Paladins. That doesn’t mean that Overwatch isn’t a good game.

Now Paladins may have loads of characters to choose from and the mechanic to ride horses and mechanic cougars but those aren’t good enough to it to compare to… the ‘Earth Walk!’