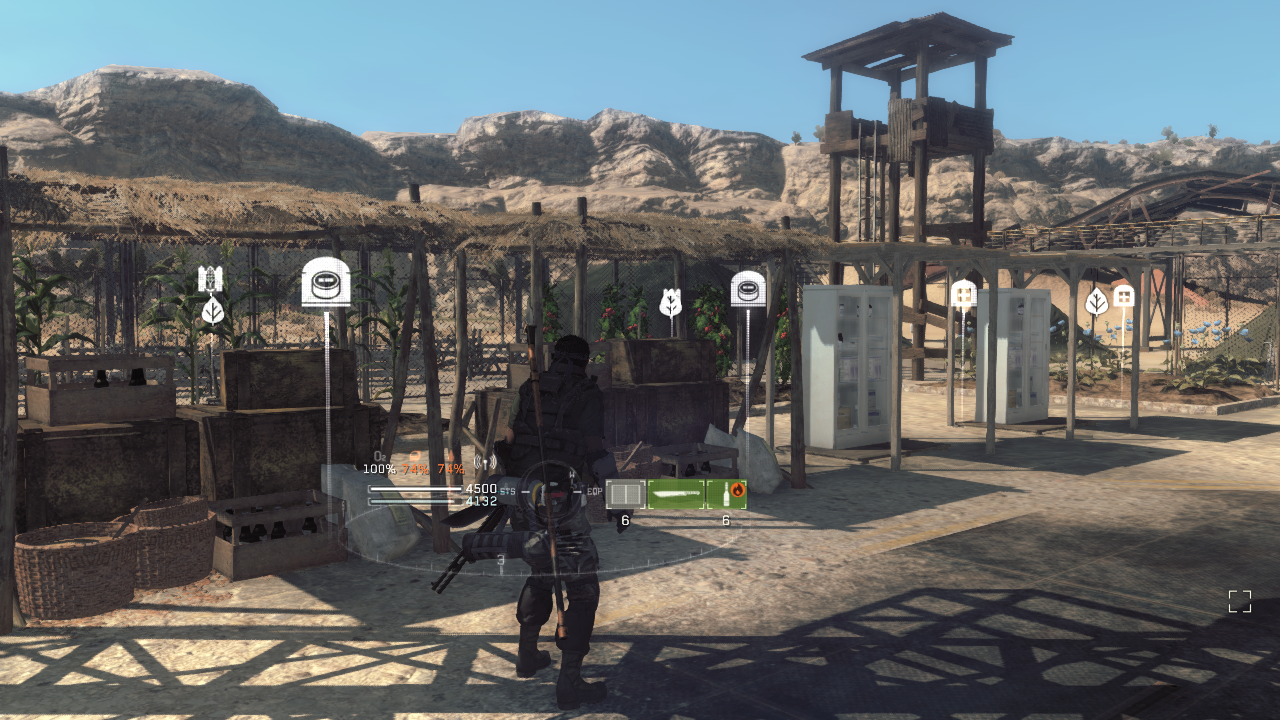 X35 Earthwalker have played Metal Gear Survive for a good long while now. It was developed by Konami. Once again many critics have wrote this game off as bad but those critics and even you tubers like Angry Joe do not know what they are talking about. All just jumping on the hate train for views and followers. It’s lame. For starters when we watched some of Angry Joe’s gameplay we saw that he wasn’t very good at the game at all. He didn’t keep his characters food and drink at 100% which is linked to another complain he made, which was that our character gets tired too easily. Our maximum stamina is directly connected to our thirst (in the game). If your drink is 40% then we only have 40% of our maximum stamina and when you are in the dust which triples the amount of stamina consumption, off course your character will get tired quick. So a part of Angry Joe hating the game is due to him being bad at the game and not understanding that it is a survival. We at X35 Earthwalker will provide our own opinion and views of Metal Gears Survive. It’s an awesome game but certainly has some flaws. Let’s take a look.

The story was interesting and twists and unexpected stuff was thrown in more than once. We will be giving some spoilers right now. For example finding out who Goodluck really was, that the Lord of Dust couldn’t naturally be destroyed and that Seth was a actually dust monster, super wanderer etc. Now some stuff was predictable like how it’s obvious the characters wouldn’t escape rite when the lord of dust first showed up to the base and that they will all stay behind to help defeat the lord of dust instead of leave and that Virgil would survive. The story wasn’t anything major, nor did it trigger any emotions either. The story was just good and interesting… that’s all.

Let’s start with the flaws of Metal Gear Survive. Having players suffer from drinking dirty water wasn’t fun in the slightest. There is a chance that your character could get infected and would require medical aid. Now we get the whole point of this as it’s survival and when worse comes to worse you may have to drink dirty water to SURVIVE. It’s a survival game after all. When you do get the means to get food and clean water, survival becomes incredibly easy in terms of food and water. What they should have done was require that players find a hanging pot or get a certain material for it, instead of only being able to craft one when the game says so, as that doesn’t make sense. If I have iron or steel, why can’t I make a pot when I can make a rifle? Again it doesn’t make sense. Some players are unfortunate to get infected frequently and soon run out of medical supplies to cure the infection while X35 Earthwalker rarely got infected.

We felt that there isn’t much need for a use in Metal Gear Survive. Initially we thought that at times we will be alerted that a random wanders attack would happen on our base in which we had to make it back and defend. so we built up the base with fences and obstacles but no. Our base only gets attacked once (excluding using the worm hole digger for collecting energy). That one attack also seems like something we could have handled without fences by the way. Defending the base should have been made more important. Also, why does crunching and going prone drains our stamina but jogging doesn’t? Off course in Rea life it costs energy to move while crouching but shouldn’t jogging be more taxing. We know… video games… fiction… balancing etc.

What’s frustrating is that it’s so easy to get a negative condition from combat. Too often we got internal bleeding or bruises or cuts etc from just one hit from an enemy. If we don’t get a negative condition after being hit, we consider that very fortunate. That’s how bad it got. nothing worse then getting hit and need to cure yourself at the start of a wave. It should be less likely to get an injury like that from one slap. The game requires so much from your exploration team. They need quite a lot before they are a high enough grade to even get materials worth getting. You should be able to get better materials more easily and in a greater amount since it costs supplies and gear to supply the exploration team. Also as you explore Dite you will mostly find lower tier materials and instead of rare materials even if you completed the game. Some items, gears and weapons are too costly to repair. Forcing players to use their weaker weapons to preserve the stronger ones. The cost should be less and allow players to freely use their strong and rarer weapons.

Harvesting materials and energy from dead enemies and animals takes far too long and ruin the pacing of the game. There was a time where X35 Earthwalker killed like 25 wanderers and left like 14 of them because it took far too long to harvest them all. It made everything boring. It meeds to be faster. What’s very disappointing is that it takes far too long to unlock the other classes: Assault, Jaeger, Medic and Scout. We unlock them after completing the game which is far too late. Also it costs far too much energy to upgrade and unlock new skills. So you never really get to enjoy the new classes and the abilities. It should be made easier. After you complete the game there isn’t much stuff to do in the single player. All there is just containers washing up, places to mine for energy and strong kuban presence. There isn’t even that people to rescue anymore. After some days we still haven’t seen much change which is disappointing. 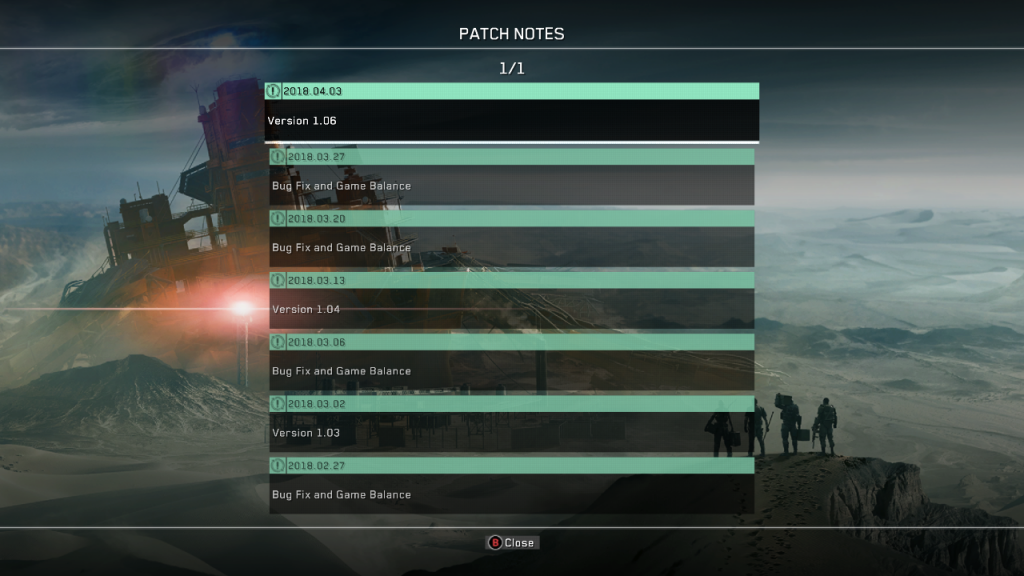 Now Metal Gear Survive has got a lot of good points as well. First of all the developers have done some work on the game in terms of updates, fixing some bugs and stuff. That’s great and we hope they do more as more end game activities are needed in this game.

We love that this game has a lot of things to craft. There are many gears, weapons and items for players to discover and build themselves. As you go through the game rarer and improved versions of the current weapons become available to craft. For example the simple pipe is what we start with but you can get the combat spear which is superior and more durability. Eventually some real crazy items like a frost blade and a hammer that looks like something Optimus prime would use. That’s creative and we like that.

Metal Gear Survive sets a good level of difficulty in the survival. From the start the game leaves players to find water and food. If that wasn’t enough players must be aware of how much oxygen they have when in the dust (which is 90% of the world). The dust also triples the consumption of stamina as well. Players will also need kuban energy. The player will also need medical supplies to heal infection or bleedings and more. Not only that but rest is a factor as well which without can lead to fatigue. There is multiple ways to die in Metal Gear Survive and the difficulty is fair. Players that are forget certain factors our lack supplies will suffer in this game. That was done well.

The difficulty in the missions really escalate as you progress through the game. The first ones are simply going next door to get an item from here while later you need to travel a good distance in the dust, traverse a abandon building and it’s undergrounds, go past enemies, get the item and then get back out before you run out of oxygen which isn’t as easy as some will think. It it weren’t for the ability to add oxygen through kuban energy then most players would have died long time ago. It would be brutal. Then missions get so big that they need that oxygen station that can be crafted to get enough oxygen to survive as there isn’t enough oxygen to return back to base (there isn’t). We like how difficult and how the difficulty escalates.

Being able to create our own character is a good touch, there is a good amount of options and details there. Honestly there should be a bit more but with what we have, X35 Earthwalker made his own unique character “Chelsea” and he’s happy with it. We have seen some characters and quite a number of them look cool but some do look quite similar in many cases but even so the fact that we have a character creation is very nice and what we can create is good.

This is small but the ability to change the background music is a great touch. We have found hidden Solid Snake boxes around the game and unlocked some awesome music which we can now have playing as we move around, craft and harvest in the base. It makes the base far more lively.

Even though the extra classes came much later, they are awesome. The Jaeger takes shooting to another level. The Assault makes melee combat a breeze. The medic makes it really difficult for some to die. The Scout moves effortlessly though the lands and buffs defences. When you unlock them and can see the different abilities that each class contains, you automatically get excited as to what these could do, on top of what you already have. The extra classes are a great idea.

Two more things. We love that there are boss enemies in the game. We found a large half dragon like creature which can fling debris and charge you down. It killed X35 Earthwalker in two hits after a long battle. We have yet to encounter another boss too but the fact that these powerful guys, who can take multiple grenades, can show up reminds players that they aren’t at the top yet. What’s hilarious is that you can sprint towards animals and punch them over to make capturing them much easier. All this time man was wrong by sneaking up on them through bushes when all this time what we needed to do was run up to them and give one big punch. That was hilarious.

Overall the game is awesome. An awesome game with a flaws. No it isn’t a traditional Metal Gear game. No there isn’t any solid Snake but Metal Gear Survive is it’s own a thing. A spin off that goes in a completely different direction. It’s like Minecraft plus Ark survival evolved plus Sims. It has quite a lot in there for players and we are glad we got the game. great graphics and sounds, different enemies, lots to craft. End game does need some help though but as you play through there is lots to do. Now Metal Gear Survive may be awesome but it’s no where as awesome as… the ‘Earth Walk!’