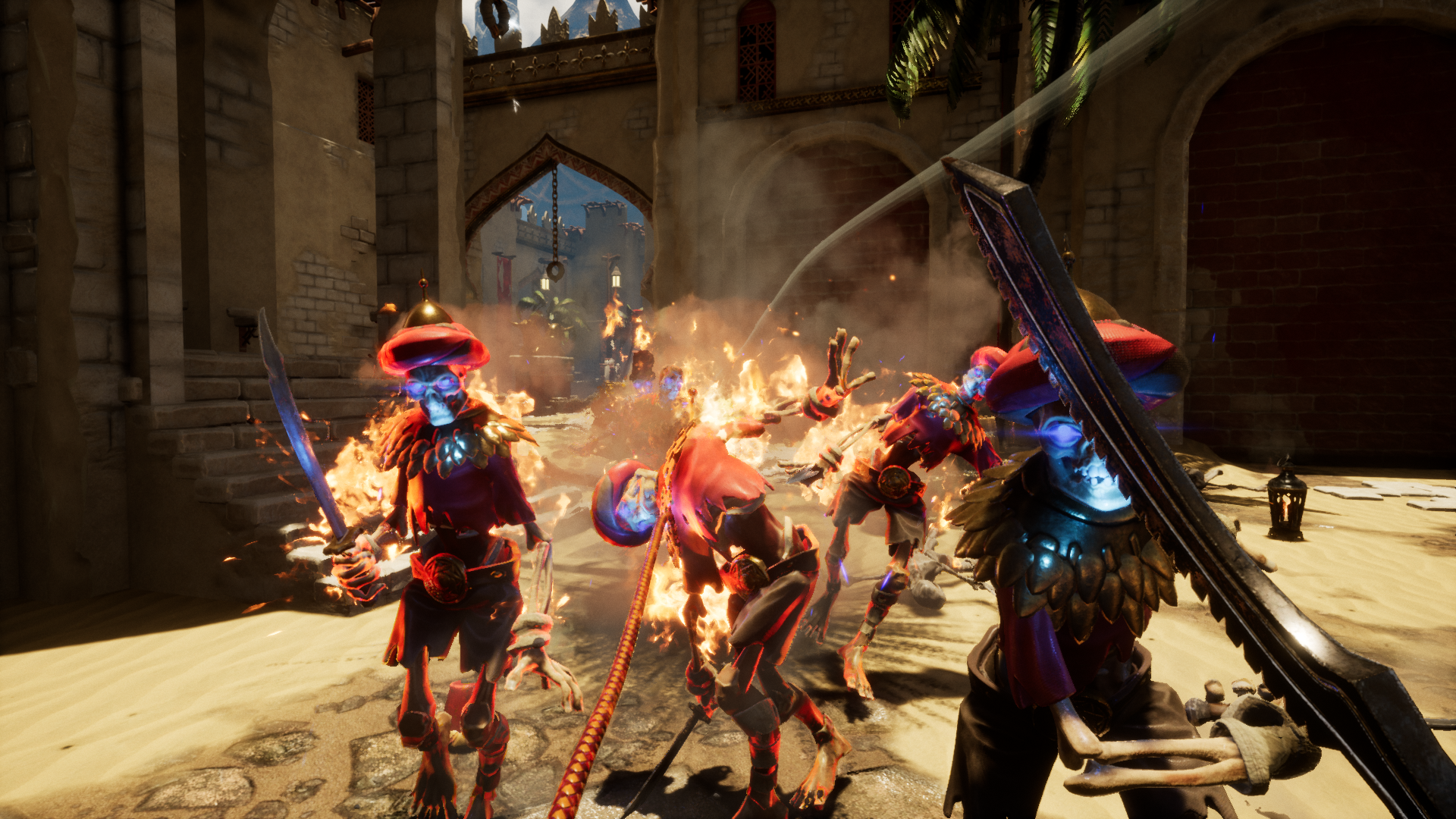 City of Brass is a new first person Arabian Nights adventure game developed by ‘UpperCut Games‘. City of Brass is coming out 4th of May on the Xbox One, Play Station 4 and PC (Steam). Now this has gotten some attention and for good reason but why? Let’s take a look.

The story in City of Brass is about as simple as it gets. A Arabian Nights style game. The City of Brass is a legendary place. It is filled with both reward and danger. The danger is that deadly traps and trouble making spirits but the reward is that the streets are brimming with the wealth of the nation. So off course there is always someone who wants to try and get this wealth for themselves. That someone… is the player. A cunning thief who is aiming for the city’s heart which is where the big treasure is.

The player isn’t going in unarmed. The cunning thief wields a sword a blade and a whip. The whip is the more versatile of the two as it can be used to swing to places and safety, trip and stun enemies, grab objects, disarm enemies and break weak barricades. The sword off course does what it says on the box. A game like City of Brass in a setting like this means you just know there’s going to be lots of movement and traps. So prepare to avoid poison gas traps, slide under blades (like in the movies), jump over pits and don’t let those spears hit you. You can use these traps to your advantage though to destroy the enemies. 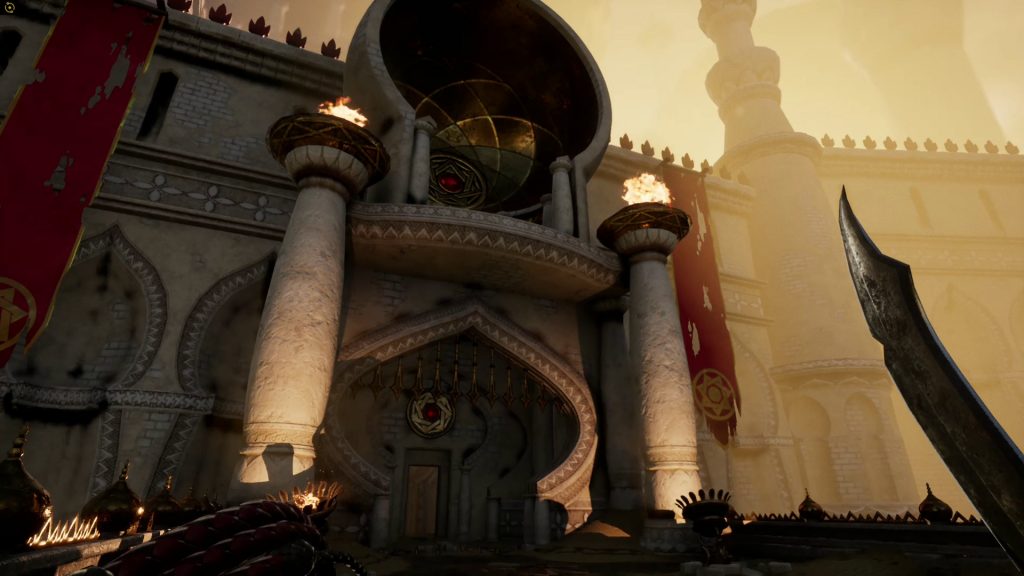 City of Brass isn’t some easy mode pleasant game. You are expected to die a lot of times, learn from your mistakes in an attempt to get further and further, hopefully to reach the heart of the city. It has been said that no two playthroughs are the same. The use of both the sword and whip have been balanced to the best of their ability to have the two weapons work with the movement speed and actions like sliding and jumping to keep the pace smooth and fluid.

Some enemies may require a bit more than just your causal sword swings. In that case your surroundings can be interacted with. For example you can pick up bricks and hurl them in your enemies faces. Not only that there are explosive vases that can be thrown as well. Set enemies on fire, blow them up or like mentioned before force them into those nasty traps to finish them off. Now players will encounter many beings in City of Brass but not all are bad and out to harm you. Some genies for example allow you to trade loot for secrets, upgrades, protection, unlocks, gear and more. While some genies actually grant you the opportunity to use one of three wishes. 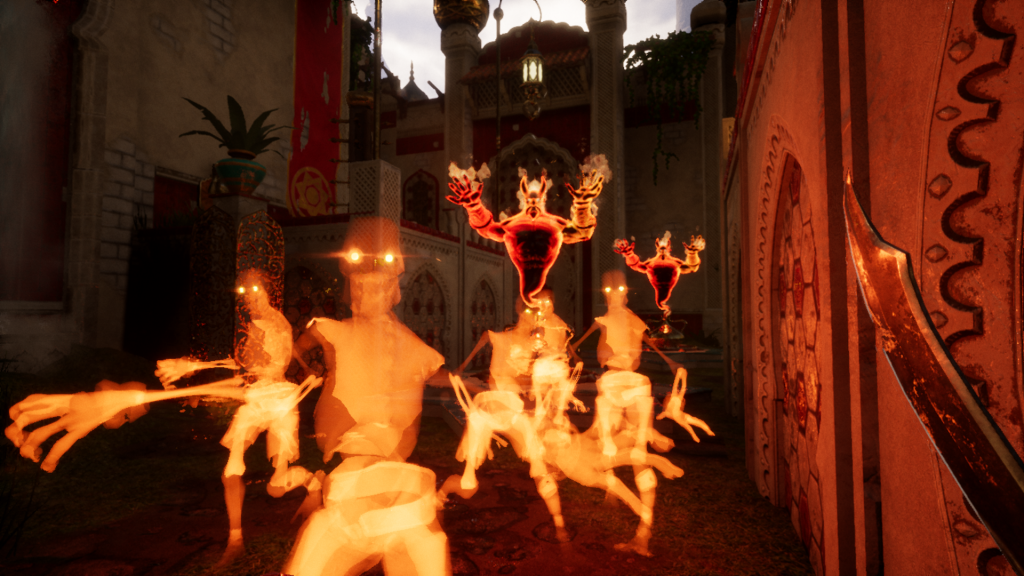 Now makes sure to collect as much treasure and loot as possible as that all increases your score. It’s all about the score here for bragging rights. Do not pass up any chests you find as they can contain relics, weapons and even armour upgrades. Now do all this while keeping one thing in mind… you have limited time. If you fail to get to the exit in time then… well… legends say you will die by dervish. Don’t ask us who that is. Find out for yourself. Now that we think about it. This game sounds similar and to Spelunky. Running around, using a whip, can find weapons and items, collect loot, get a score, a shop to trade for items, getting to the exit and if not in time then something bad will happen. Yep, definitely like Spelunky which is a good thing since Spelunky was a great game.

Now if all this seems to easy for you, City of Brass has a feature which should sound familiar but will amp up the difficulty for you in many ways. Players can add divine burdens which are global modifiers which spawn more environmental hazards, change enemy abilities and much more. So basically you could have more enemies with wackier or mixed up abilities while having more traps around to avoid while traversing the City of Brass. This system reminds us of Halo and it’s skulls which make everything harder during the campaign and firefight.

We checked out some gameplay and can confirm that things can get real crazy in City of Brass. Glowing monstrous but nicely dressed enemies will come for you from many places, all hostile and armed. Players must know when to stand their ground and fight, or take flight by whipping to swing to another location for safety. Some chests are traps so when you open them, make sure to stand back otherwise you might get a bunch of poison in your face (that’s a bad thing). Also it’s what we thought. The levels are ever-changing but logical procedurally generated. Meaning forget having a pattern laid down or a map as it’s different each time. we are currently liking what we are seeing.

Overall City of brass is a cool looking game. The graphics are nice, the sounds are nice and the level designs are mixed up and bringing something new to keep players on guard. Hopefully there is a greater variety of enemies. The developers ‘Uppercut games’ did an excellent job with this game. We at X35 Earthwalker are looking forward to seeing this come to the consoles and what gamers think about it. Now the City of Brass may be legend but it’s not as legendary as… the ‘Earth Walk!’