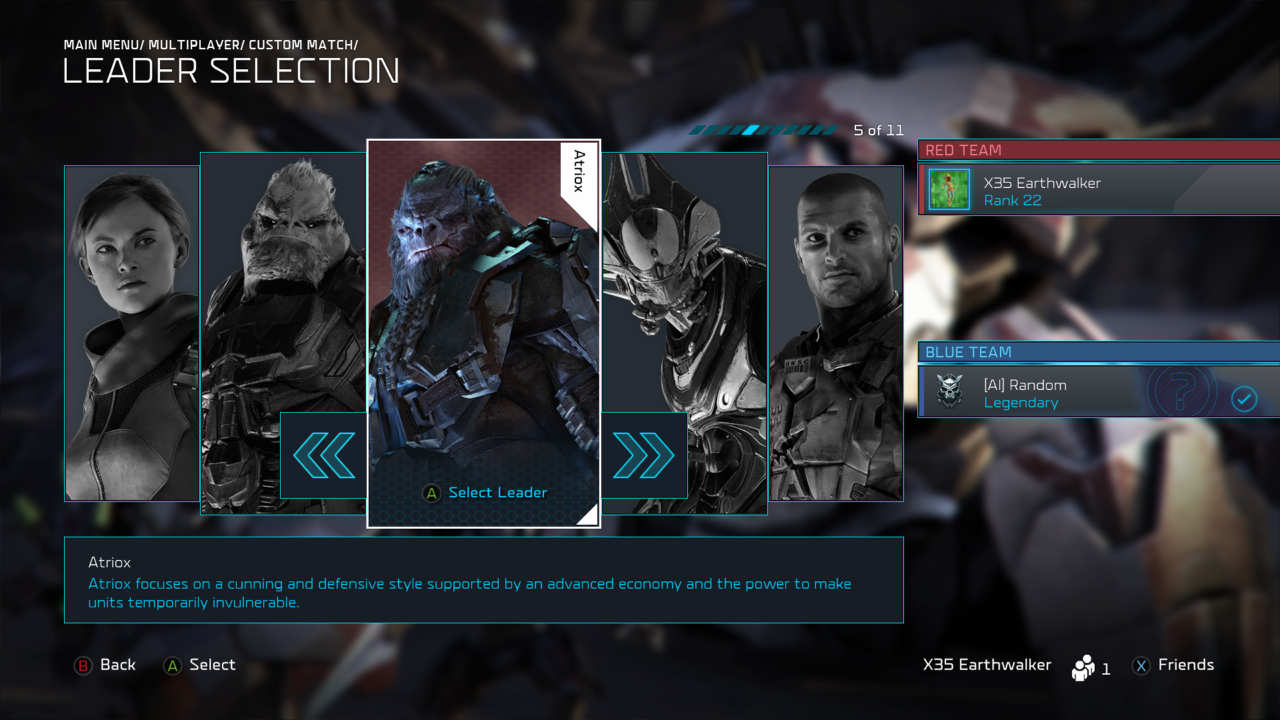 Halo Wars 2 is home to some big and powerful wars. Players meet on the battlefield and explosions take are happening everywhere. If you plan to get in a match you must come with strategies. Don’t just build anything and everything. Like we said before, pretty much one of the big things that makes all the difference in a match is the character leaders. Character leaders have leader powers. The leader powers can flip the match in your favour. Leader powers can also just seal your opponents fate in that match.

X35 Earthwalker has played and defeated many with all the leaders. He has his favourite and least favourite leaders but knows how to use them all. He will share some of what he knows so take a look and enjoy.

“Atriox at first I wasn’t sure how to use him. His strength does lie in expansion but his bigger strength is in his leader powers to make his armies invulnerable. This is a game changer for sure. As you build your armies you must have ‘Atriox’s bulwark’ and ‘Unbreakable’. These two will guarantee you victory any battle and possibly the match. When your army collides with the enemies fight them for a while and stay as close as possible. Then when some units are weak or about to lose some, activate Unbreakable. Your opponent will normally retreat, so chase them and keep up the damage with no fear as you can’t take damage. After they have lost many units get ready for them to use a leader power to counter. If it’s anything but Forge’s scatter bomb, then activate Atriox’s bulwark to heal your weak units and negate all damage from that leader ability. I have made opponents resign after seeing this knowing that my army is still strong, blocked everything they sent at me while still dishing out damage. Give this a try.”

“Captain Cutter should be straight forward that his strength lies in his orbital leader powers. No infantry is stronger that Odsts. This means you have to get as much as possible. Do this by using ‘ODST drop’ which gives you 3 squads of ODSTs. The ‘Cyclops Drop’ is powerful as it drops in a high veterancy Cyclops meaning it’s health and damage is off the charts. Keep dropping those guys in. The last orbital leader power and the strongest is ‘ODST Assault group’. This calls in a wolverine, some ODSTs and even a scorpion tank. Before you battle the enemy make sure to have these leader powers ready for use. This way you can replace all destroyed units making it like you never lost anything in the first place and better, you replace them with stronger units of high veterancy. This discourages the enemy. Lastly notice that any enemy unit that has a ODST droped on them, get stunned. Use that to your advantage.”

“Decimus is terrifying when used correctly. With Decimus your units will always have the advantage. ‘Vortex lightning’ should be used at the start of a battle. This way your enemies units will be taking damage, have reduced defense making them easier to kill and get stunned, making them a sitting duck. So now you have the initial advantage. Also use ‘Siphon’ (upgrade it) on the units at the front of the battle so that they become harder to kill and last longer. Now they gain health as they damage the enemy. Combine this with the two passive leader powers: ‘Boundless Siphon’ and ‘Boundless Rage’ and the match is pretty much yours. They grant your units permanent siphon and increased damage and speed. It’s like super siphoning. My armies like this have taken down a army, then a scarab, then the base in one match before. In another match I have taken on two armies at the same time with my own. It was a hard battle though. Decimus is not to be messed with. Weaken your enemies then buff your own.” 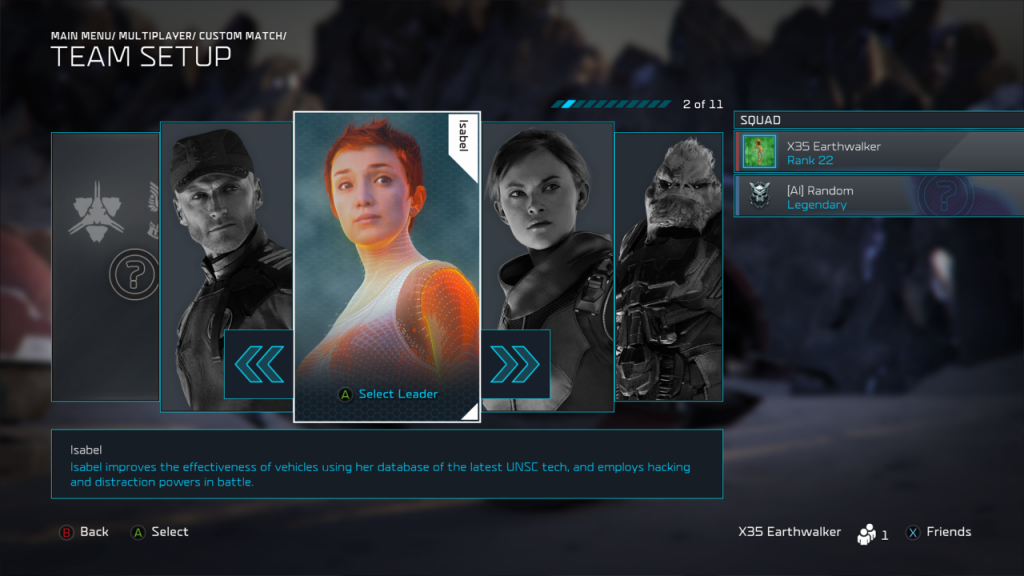 “Isabel is at first what I considered very weak. After some training I learnt a few things. She ain’t so weak after all. Her MAC Blast is amazing. What sets it apart from the others is that her’s is almost instant. They shouldn’t bother show the cross-hair on the ground for the enemy as you can never evade it in time. It’s that fast. It’s fast and yet so strong. A upgraded Mac Blast will destroy everything. I once got hit by a max level MAC Blast and had to do a 180 and retreat… Then later came back and destroyed them (well they started it). Spend some time in the match countering your opponents infantry. They will then give up infantry and go vehicles and air, which is what you want. Wait until they are quite near their base. Push up and fight. Wait for their army to group up and then hit them with ‘Ghost in a machine’, which grants you temporary control over their mechanical units. Use their units to directly attack the base and leave the turrets alive to damage units you have controlled. Your army supports the controlled army and that base will go boom. With Isabel, timing is everything.”

“Anders probably one of, if not, the most difficult to handle because her leader powers make things at times unfair. We won’t talk about the ‘Protector Sentinels’ as i’m sure we all know about them. Get some kodiaks and have them spread out a bit around the map on your side for defense. Combine this with ‘Sentinel beacon’ which means every shot from the kodiaks and siege turret produces aggressor sentinels which attack everything. This makes infantry useless against you. Literally a few kodiaks on guard duty with this leader power can be unfair. Drop ‘Sentinel Network’ right at their base to keep causing damage to everything they build and their base as well. It stays for a very long time making it pretty much the best harass tool. The ‘Retriever Sentinel’ is best used to throw your enemy of. Force your enemy to focus on countering your infantry and vehicle, then when they have many things that don’t do so well against air just drop your Retriever Sentinel in and let it have it’s way with the enemy troops. It’s too strong for them to start effectively counter. With Anders you can make your enemies afraid to do certain things.

“Ship Master is almost a troll with his leader powers. Basically you can control the map and mess with your enemy. Plant as many scout mines as you can throughout the match. Scout mines provide you with sight where that bomb is. It’s like many eyes around the map. Also Scout mines do a ton of damage, so no one will want to stand on them. Plant them near power nodes. Use ‘Spirit Support’rt’ to fill your army with high veterancy hunters, elite rangers and engineers. You should also call it in during a battle to replace your dead units and get extra damage as the spirit stays around to fire at the enemy for a while. Once you have a large army use ‘Tactical gateway’. Tactical gateway is one of those leader powers that is pure strategy. Create one gate right behind an enemy base and lead your army through the other to get there and when you need to leave hop right through. Be aware though that your enemy can go through your gate. Use Displacement properly. Many don’t know how to use this leader power. Most use it to send enemy units away just for them to soon come back. Use it instead to send enemy units to you. More than once I have sent a large group of enemy air units straight to my group of reavers who tore them apart. When you are destroying the enemies army and tries to escape, use Displacement to bring them back, so you can finish them of. Ship master requires a lot of skill to use as he has very little direct damage abilities.”

“Forge is all about the vehicles. He can’t do much with infantry so air and vehicles is how he rolls. You need to have grizzlies. Very strong tanks that do great damage. When in a battle wait for when you know you will lose some units. Then use ‘Combat salvage’ to easily get back the units you lose (the first 8). This allows him to keep the vehicles coming. Vehicles, even against their counters still are pretty strong so just because they have some cyclops doesn’t mean they will get destroyed just like that, especially not grizzlies. Use ‘Grizzly Battalion’ to replace fallen units with more grizzlies. Do not rely on ‘Scatter Bomb’ as how you would rely on eradication. It does low damage and is so easy to evade. Only use it to scare away your enemies to create breathing space or if the enemy is trapped behind a base and you have them cornered as that’s when the full might of Scatter Bomb takes place.”

“Kinsano is who I know least about as I don’t have her. From what I have seen though her leader powers come back really quickly and ‘Inferno’ is incredibly dangerous. Just launch that on a base and everything get real weak. Launch that on a enemy army and watch them melt away really fast. Her inferno is her trump card. ‘Hell Charge’ should be used after you mingled your army with the enemies so that when yours die they explode damaging as many of theirs as possible. Have multiple bases and mini bases around to make ‘Red line’ effective. All newly spawned units of yours will be boosted. So have units come out from all of them to overwhelm your opponents with boosted units constantly. That’s all I will say concerning her.”

That’s a lot to take in. Go into skirmish and try out some of these strategies or tune them to your style. Either make sure to do the ‘Earth Walk!’