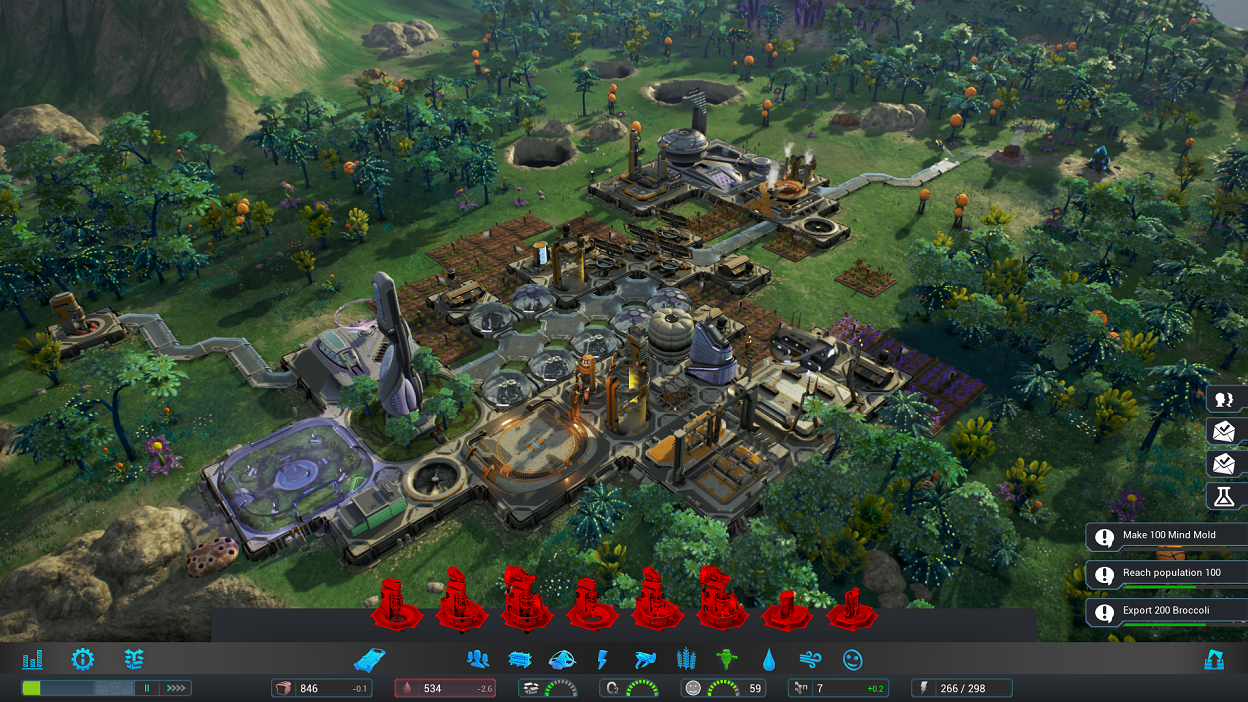 Aven Colony is a new sci-fi city-building strategy game developed by ‘Mothership Entertainment LLC’. Aven Colony is coming out 25th of July for Xbox One, PS4 and PC. This game looks interesting.

The story is very simple in Aven Colony. The player must build a new home for humanity. Where are we? We believe the world is called Aven prime. This world is a super dangerous hazard place as it has: shard storms, low oxygen atmosphere, dust devils, toxic gas eruptions and extreme electrical storms and apparently this isn’t everything. Sounds very suitable for humanity to stay. This entire world has different biomes as well. There are arctic areas, wetlands and deserts as well. The Sandy Gulch is actually a snowy arctic area. This does make sense as an area that gets very little rain or snow with grounds that can’t grow plants is a desert. Vanaar which does look like a nice jungle-y green area which we wouldn’t mind taking a holiday to but the weather in Aven prime is fatal.  So exploration is definitely a huge part of this game.

In the world of Aven Colony you are the new colony governor and you must supervise your colonists. If you do very well, you will move up in rank (even though you are in charge). You can reach the rank of Expedition president. This can be done by providing your colonists with health care, police order, entertainment, good food and creating nice jobs. You can hold elections, that’s if you feel confident that the colonists still want you in charge. Players can even set social policies to influence the behavior of the colony.

Aven Prime have many secrets, we heard. The single player campaign will reveal some of the many secrets. Some, not all. This means that players must “split up and look for clues” and do some hunting for secrets. Whats also great is that there is a sandbox mode where you can customise any mission. So have fun with that. If you haven’t figured it out yet, building is the main thing of this game. For humanity to survive you will need to build structure for growing food, manage air quality, convert resources, houses for people, store resources, mine ores, research house your colonists, grow food, store resources, manage air quality, mine ore, convert resources, perform research and manufacturing and much more. You can upgrade all your infrastructures.

Also, humanity isn’t alone here. Apparently you guys have neighbours. There are aliens here. Notice that we said aliens and not alien. There are several alien life forms here. Like deadly plague spores and giant sand worms. Don’t we all love giant sand worms? There is something worse though. Apparently there is a vicious fungal infection known as “The Creep”. The creep sounds very interesting though, like is it intelligent also and plotting the downfall of humanity trying to live here?

We checked out some gameplay and we can straight up say that this looks like a well done game. The graphics are great, no info concerning the sounds though. The designs of the buildings, vents etc all look good. The environments look fantastic. They certainly look alive, especially the jungle looking area. The weather changes as the days go on so adjusting and surviving is crucial. The wildlife looks great. We saw some very cool bird creatures and their flying animation is done very well, moving almost like real birds. Oh and the sand worm looks real intimidating. Imagine seeing that outside your window.

Overall this looks like an impressive game. Those who like building simulations and management then this will be for you. It’s quite deep and looks great. The aliens are a nice twist. The developers ‘Mothership Entertainment LLC’ did an excellent job with this game. This game is worth checking out. We really like what they did with this game but what we like even more is… The ‘Earth Walk!’