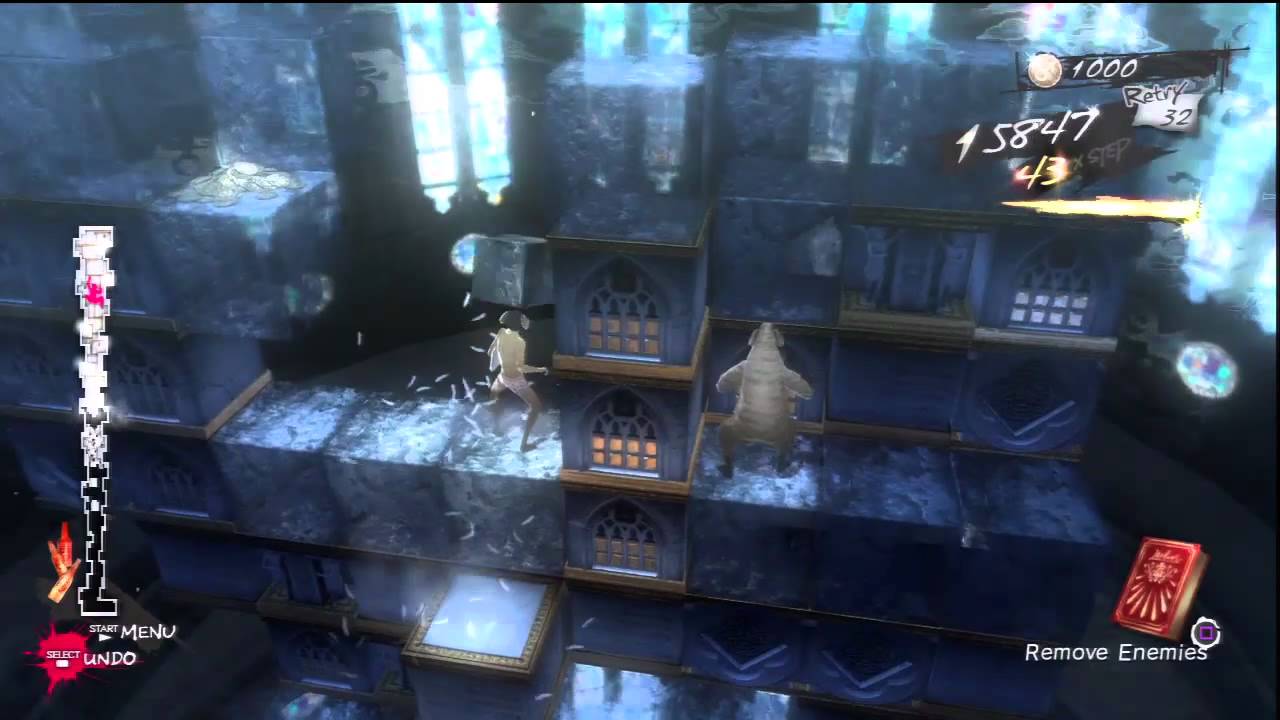 Catherine is a puzzle platformer adventure game but we say it has some horror elements. This game came out in Japan in February 2011 but in Europe February 2012. This game is excellent and deserved more love from the gaming community than it got. If you like puzzles, cinematics and an extremely interesting story then this should interest you.

Basically in the world of Catherine you play Vincent Brooks, a computer programmer or repairer, not sure but what we do know is that he is in a relationship with long time girlfriend Katherine and the topic of marriage and other big topics are coming up from her. This makes him uncomfortable and can’t avoid the topics anymore but must make a decision. That night he has a strange dream where he is carrying his pillow, in his sleeping shorts and has sheep horns on his head. He is in a strange place where a voice tells him that if he wants to live, he must climb. This isn’t a dream, it’s a nightmare. It certainly doesn’t help that rumours are going around that there’s a dream where if you fall and die, you die for real life. Also a new girl shows up in Vincents life and trouble starts and then gets way out of hand. What’s going on? what’s with this nightmare happening right after the question of marriage? Why is all this happening now? Who will he hold on to? So which Catherine? It gets real good. Trust us.

The game is split into three parts: watching the cinematics, chilling in the bar and tackling the nightmares. The cinematics are very nice and frequent but not too much to where it gets annoying. These cinematics take players through the story and reveals what’s happening in the characters life. We must admit cinematic scenes are very well done and keep our interest. You must pay attention as it reveals clues also to what is really happening in this world. The bar, called ‘the stray sheep’, is where Vincent hangs out and drinks with his buddies. Here is the most important part of the game. You can talk and interact with characters and objects here. These interactions actually make an impact on the game. You get to listen to others and maybe help them with their problems in life. Just saying this though, what we also like about these characters is that their problems are realistic as gamers and viewers of this game can understand and probably even relate too. Here you can also learn secrets and discover new things from conversations. tip from us: Make sure to have at least two drinks as it really helps out in the game.

The night mares is the core of the game and where all the puzzle action comes into play. Here you must climb up the blocks to reach the top of the wall of blocks. To do this you must move, pull and connect block to make paths to get up. This is way easier said than done. The blocks can magically connect at the ends and stay in position, defying gravity, even if nothing is beneath it. You must learn climbing techniques to figure out how to do this. The puzzles and walls get harder over the time (obviously) until you get to points where you may have to scratch your head once or twice. We at X35 Earthwalker strongly suggest that you play in medium difficulty as a minimum as easy mode is far too easy. Hard mode is for fast thinkers and clever gamers or just if you want a challenge. Most exciting in hard mode though. At the end of each nightmare area is a horrifying boss which will terrify any gamer on the first time seeing one. They are all gigantic and will chase you up the wall. Each boss has it’s own special abilities which just makes things all the more panic worthy. Each boss does have a meaning though as some gamers say each one symbolises something. We will leave that to the gamers to figure out.

Wait! There’s more. The blocks are just simple blocks. The main blocks are white blocks which function as normal, nothing special. Dark blocks are heavy and take like 3 times as long to move, costing you time. The dark blocks with faces on them can’t be moved at all, so don’t even try. Trap blocks, which have many little holes, activates when stepped on and if you stay too long or try to move another block while one, then you will die. Ice blocks are slippery and if you move on them you will slide by force all the way until you reach another block, a wall or the edge of the map stage (which means death). Bomb blocks will activate once stepped on and will explode in 3-4 seconds and damage or destroy all other blocks around it which could ruin all your hard work setting up blocks. There are more but gamers must discover them for themselves.

This game has local multiplayer! Babel is for Catherine pros only. This is table banging, control throwing (we didn’t throw ours) head scratching, scream action. You are given the challenge of climbing four towers: altar, Menhir, Obelisk and Axis Mundi. Each level increases in difficulty seriously. The Catherine masters are the ones who can beat Axis Mundi and X35 Earthwalker is one of them. If you want to prove that you are the man of legends then try beating your friends in a one on one climb off where the winner is praised and the loser… well… dies (but not in real life). These are where our biggest laughs come from. Do you play with honour and climb nicely or do you push each other off and fight for survival like animals (or should we say like sheep)? Choose from multiple different levels each with their own unique features and difficulty and just have fun.

The game also has some small things that make big impacts. For example after trying certain beverages in the bar you get real life trivia knowledge about the drink which are great to know. There is a nice bronze, silver and gold system for how well you climb the towers. There are power ups in the story mode and one on one multiplayer which have simple but very powerful effects like the white cube and dark cube allow you to create on one space in front of you. The energy drink allows you to climb two blocks at once. The story has twists and makes things almost impossible to figure out without getting nearer to the end of the game. This is a model game for other developers to look at while and learn from. There is much to say but we will leave it here.

Overall, this game is excellent and we would recommend it to any gamer as we feel in love with after being introduced to it by ‘Diamondz L45’. The developers ‘Atlus’ did a wonderful job. For more information check out the link below: