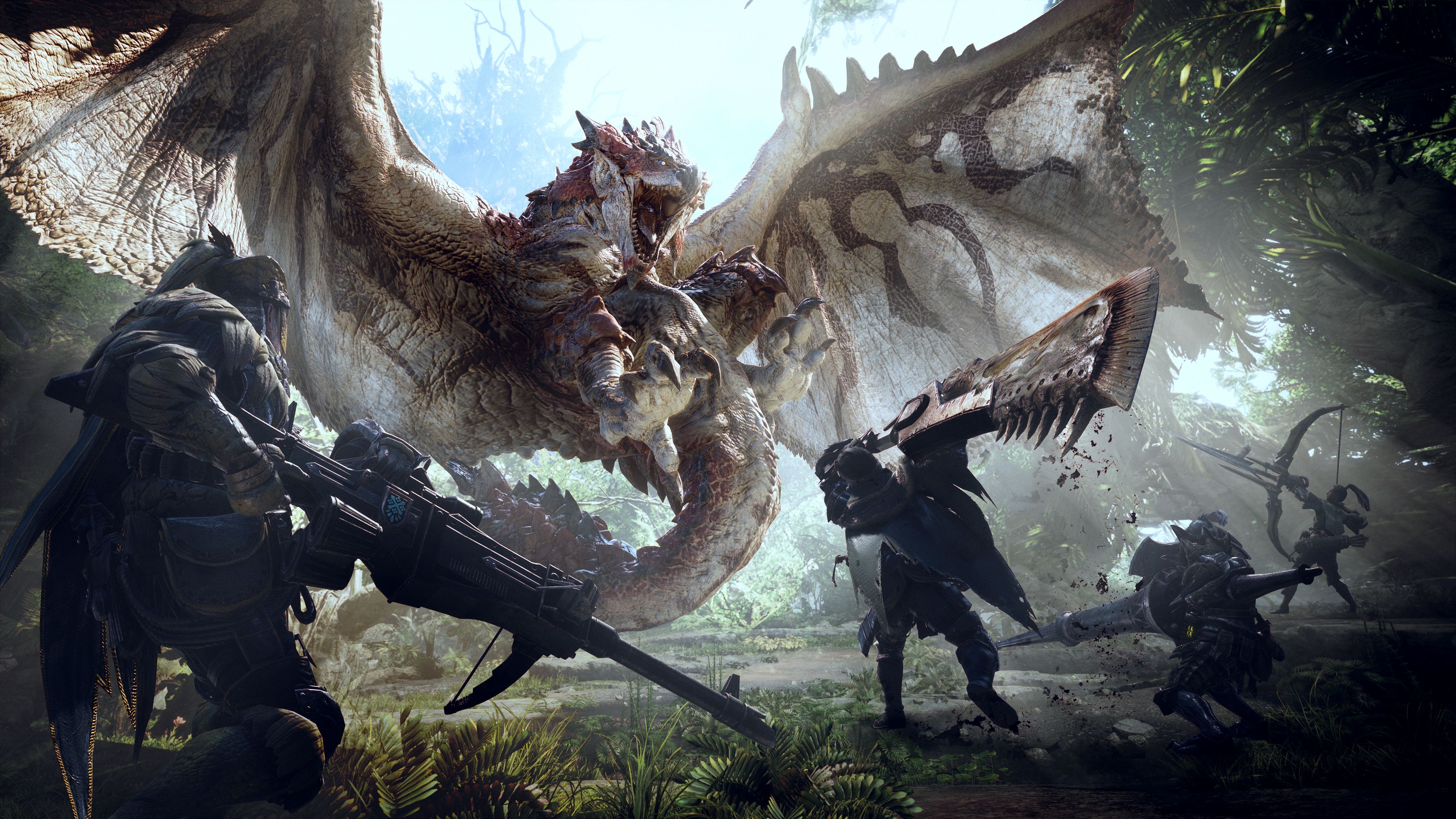 Monster Hunter: World is a new action role playing game. The latest installment in the monster hunter series, developed by ‘Capcom’. It’s coming out the 26th of January 2018 for the Xbox One, PlayStation 4 and later for PC. A bunch of large monsters need hunting down. How can this go wrong? Let’s take a look.

The story in Monster Hunter: World is pretty interesting. Once every decade, beasts called elder dragons, all head across the sea to an land which is called the ‘New world’ (One piece anyone?). Now off course humans are too curious for their own good so the guild  created a research commission. They go out in huge fleets  to the ‘New world’ to learn what’s going on. Now the elder dragon called Zorah Magdolas, who is really huge by the way, is the one that has grabbed everyones attention. The fifth fleet sent by the Commission are after that dragon.  One hunter, the player is about to have a crazy adventure. All you green horns who wanted to see elder dragon up close, this is your lucky day! 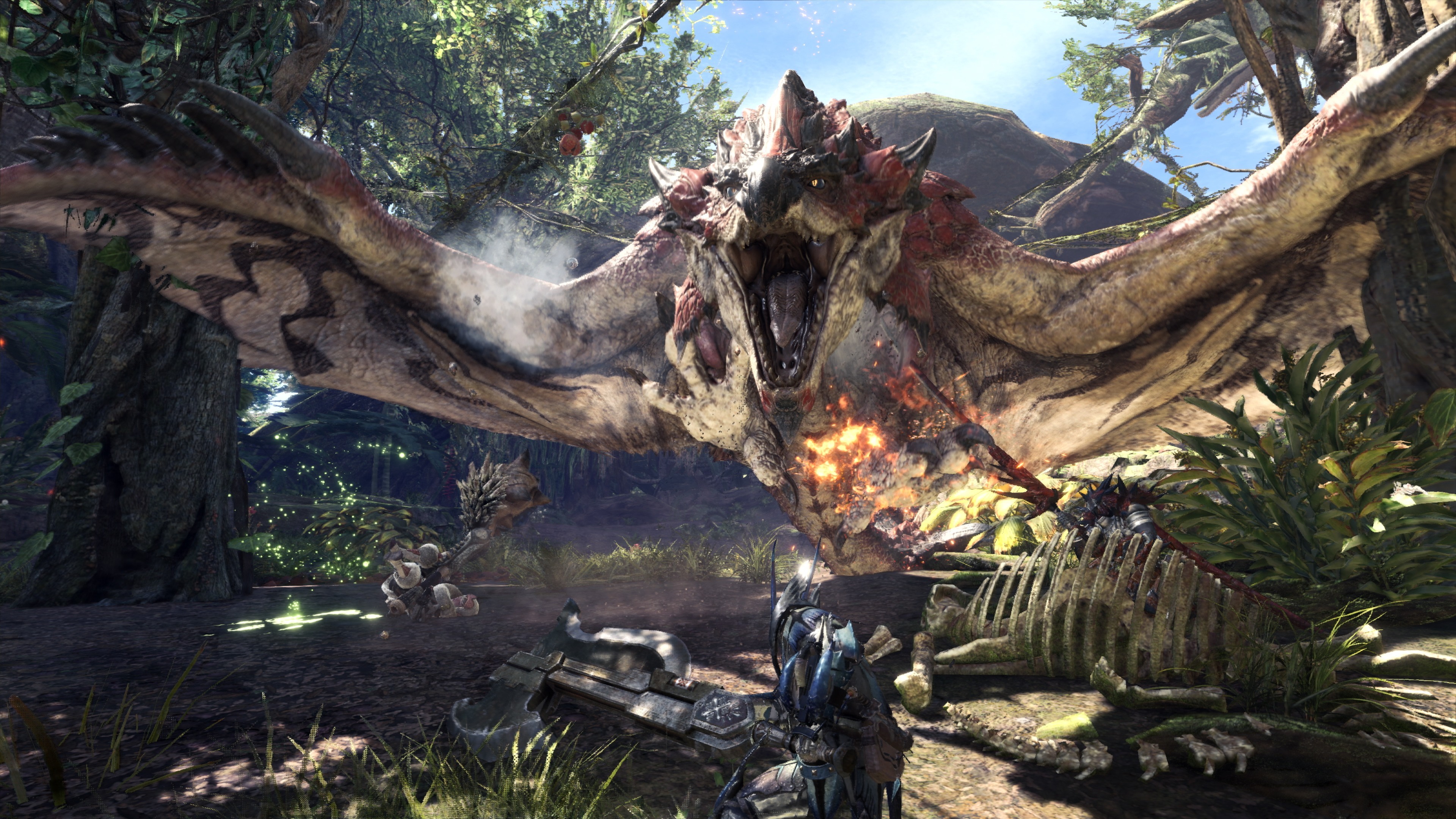 Players are a hunter and it’s their job to hunt down monsters across  many different habitats. Now overtime you hunt and defeat a monster you can get materials from them which you can use to build even bigger and more powerful weapons, which you will use to take down more powerful monsters. It’s all about progression. This will not be an easy hunt though as their will be surprises and not everything will go according to plan.

Now Monster Hunter: World is suppose to be a huge game. Come on… you didn’t think a game about travelling and hunting giant monster will be some small linear game did you? There are many different locations and they are filled with wildlife. Wherever you go, you will get some suprises. We at X35 Earthwalker are glad that Monster Hunter: World issuing more creative and experimental with this instalment because a game about hunting large powerful monsters has so much potential and room to work with.

Some locations are: ‘Wildspire Waste’ which is basically a desert which conjoined with a swampland. ‘Rotten Vale’ which is a deep valley which has a layer of decomposing remains which is formed from corpses falling from above… eww. The ‘Ancient forest’ which has a big and complex ecosystem. it also has a huge ancient tree that stands over the forest. It’s actually made from a network of trees. The ‘Coral Highlands’ which is basically the ocean and sea but on land as in above water. It has corals and look like something in the seas of Australia but it’s all dry land. Now each of these locations mentioned here are connected to each other. The Wildspire Waste receives water from the Ancient Forest. The Rotten Vale is below the Coral Highlands and the Coral Highlands  spreads eggs to the rest of the world where creatures become a part of the food chain there naturally. 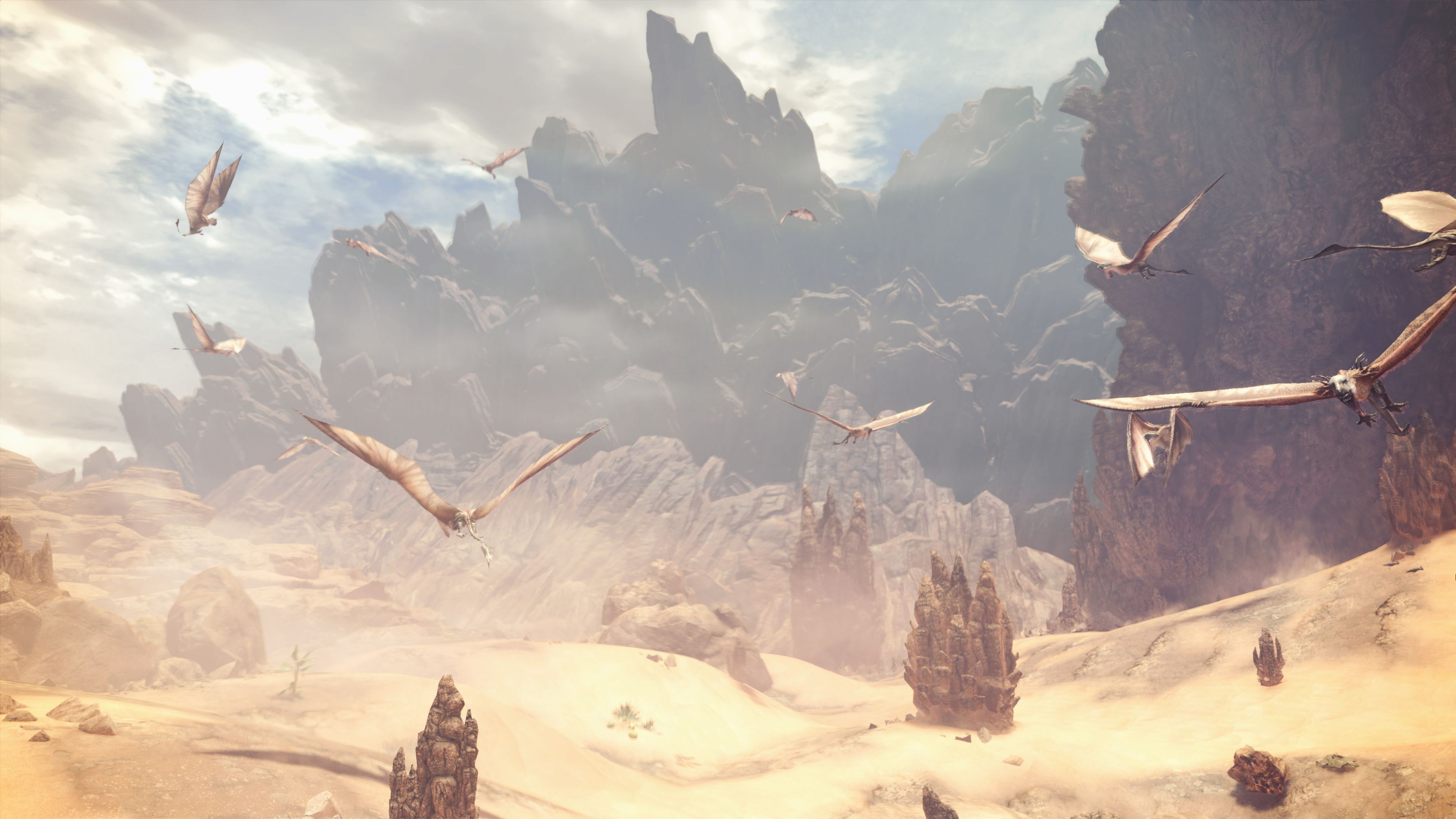 As the name suggests, Monster Hunter: world has a wide range of monsters for you to contend with and see for yourself. In the Ancient Forest there is the Anjanath which is basically a large furry-isa T-rex. A Ratholos which is basically a giant wyvern that has poisonous claws and shoot fire from it’s mouth. In the Rotten Vale you may find an Odogaron which is sort of like a red, spiky sabre tooth tiger  but really aggressive. Radobaan which is a giant wyvern but covered with bones as armour and can curl up and roll like Behemoth from Evolve. In the Coral Highlands there is the Tzitzi-Ya-Ku which is like a velociraptor but has the ability to blind enemies and it’s prey. Paolumu which is basically a large bat that can puff up like a puffer fish to fly, watch out for the tail. In Wildspire Waste there is the Jyuratodus which is basically a flexible amphibian monster that travels through mud like a sea creature. The Barroth is like a rocky dinosaur that uses mud to help hinder and trap enemies to ready up for a charge attack. This isn’t nowhere near all the monsters in the game.

In terms of weapons and equipment, the Monster Hunters aren’t short by any stretch of the imagination. They have fourteen different weapons to use to take down these monsters so forget revolvers and handguns we need something bigger. These weapons are: Insect glaive, Long sword,  Switch axe, Bow, Sword and shield, Light bowgun, Lance, Great sword, Gunlance, Dual blades, Heavy bowgun, Hunting horn, Charge blade and Hammer. Take your pick. They each have their own attacks and style. Pros and cons indeed. Do you want to learn many or be a master in a few or one. It’s up to the gamers to decide. Obviously as you go through Monster Hunter: World you will encounter different monsters who are very different in combat and movement, meaning players will benefit from picking the best weapon for the job. Possibly the Great sword for heavy melee damage and good blocking against a creature that stays on the ground and has telegraphed attacks. A bow and heavy bowgun for areal enemies that never seem to land but the damage needs to continue.

The Monster Hunters’s equipment doesn’t stop there. They also have Scoutflies which are perfect for hunting monsters. these Scoutflies remember the scent of monsters and guid you from monster tracks to tracks, eventually finding the monster. The slinger allows hunters to launch stones and nuts at whatever you feel like. Some nuts have certain effects while a big rock hits like a big rock. Hey, a weapon is a weapon. You can even use it to distract monsters or get it’s attention else where. remember that. There are specialised tools that have powerful effects. They are easy to use and you can have two at a time activated so get ready for some combinations and planning to work best with your weapons. Paliceos are basically evolved cats that stand by the hunters side and considered a equal member of a hunter team. They can support with restorative, offensive and defensive abilities and more. Treat these guys right and they will literally fight with you.

We checked out some gameplay and it is what we expected. Large worlds that have many monsters around. Keep going until you find the monster that you’ve been looking for and then engage it in combat. Off course there are many things to interact with in Monster Hunter: World like bee nests, fruits, plants and more. Use everything to your advantage and even plan ahead for fights. Don’t just run in, even thought that’s fun too. Lay some traps, have an area to retreat to in case of an emergency. A spot for your team to gather and where to head to for the advantage, high or low ground, rock or mud etc. None of these fights should be easy and we hope they keep it that way. Nothing ruins a massive powerful looking boss fight more, than a simple win, with bosses have predictable easy patterns. There needs to be a clear threat. We should be on our guard and concentrating at all times.

Overall Monster Hunter: World so far has a lot of hype going on and for good reason. The graphics from what we have seen recently look amazing. The sounds are very good especially when the weapons collide with monsters. The combat is smooth and to some extent reminds us of Dark Souls. The rag doll effects are great too. More realistic than other games. The boss fights do look epic. The developers ‘Capcom’ did an amazing job so far. We at X35 Earthwalker are actually excited for Monster Hunter: World. We never cared for the other Monster Hunter games but this one has got our attention. Now Monster may be giving the hunters problems but one thing even the monsters can’t handle is… the ‘Earth Walk!’