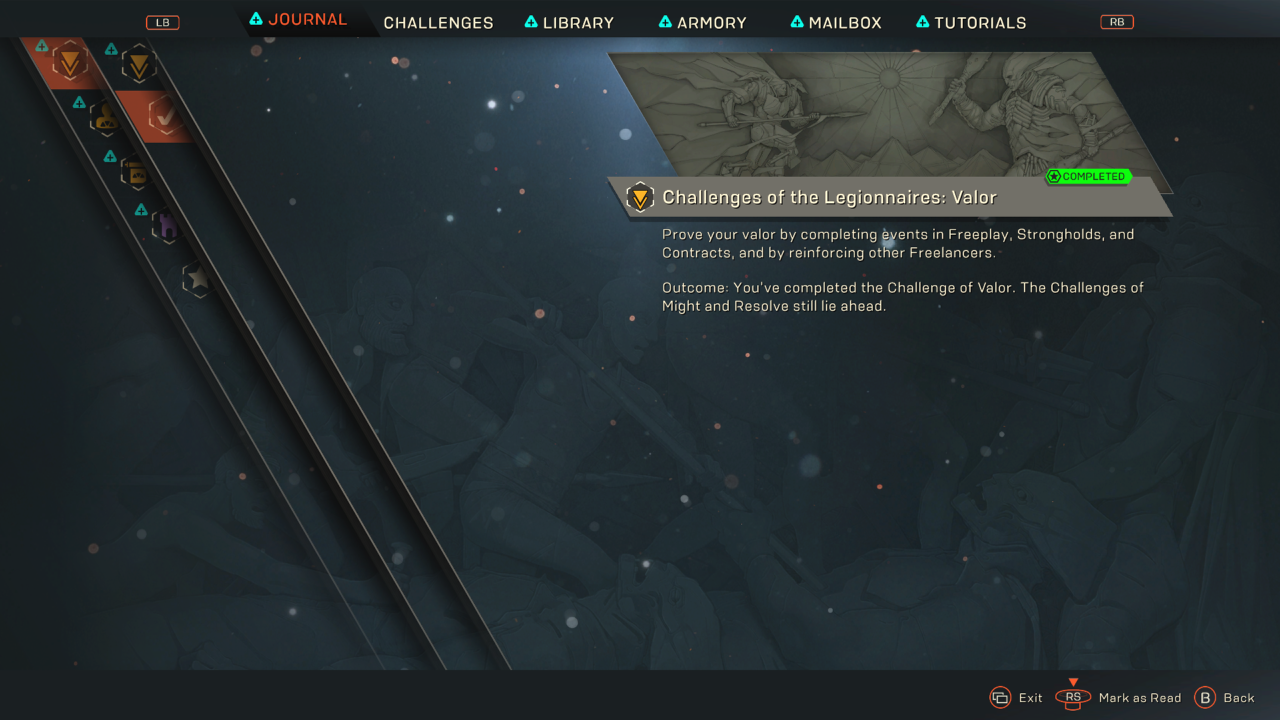 Anthem is an action RPG developed by ‘BioWare‘ and published by ‘Electronic Arts‘. Now there is a number of things for endgame players to do like grinding for masterwork and legendary gear and weapons, complete missions to get coins in order to get new emotes and more customisation. You can even aim to beat strong holds on grandmaster 3 difficulty. Anthem also has some challenges for players to complete while they wait for the next big update to the game. Now these challenges take up time and something you can’t really complete quickly at all. You do get something for doing them though. Let’s take a look.

Lancers must prove themselves to be worthy to be called a legionnaire by completing the ‘challenge of Valor’. This challenge requires that players: complete 100 world events in free play mode, Colette 25 contracts, 25 strong hold missions and 25 quickplay missions. This doesn’t sound like much as first but it’s actually quite long when you dive in. Firstly contract, quicklplay and especially strong holds can take very long depending on the difficulty you are playing on. So missions last Lon on Grandmaster 2 and 3. So off course play in an easier level… you could but then you will get gear and rewards that you literally don’t need or want making the mission pointless. You still want a chance to get the stuff you need like legendary gear. Completing world events in freeplay is annoying as you can fly around for quite a while and not see any events take place. Anthem needs to make events spawn more frequently. So completing 100 of those, especially if you never did any before starting the challenge of Valor will take a very long time. 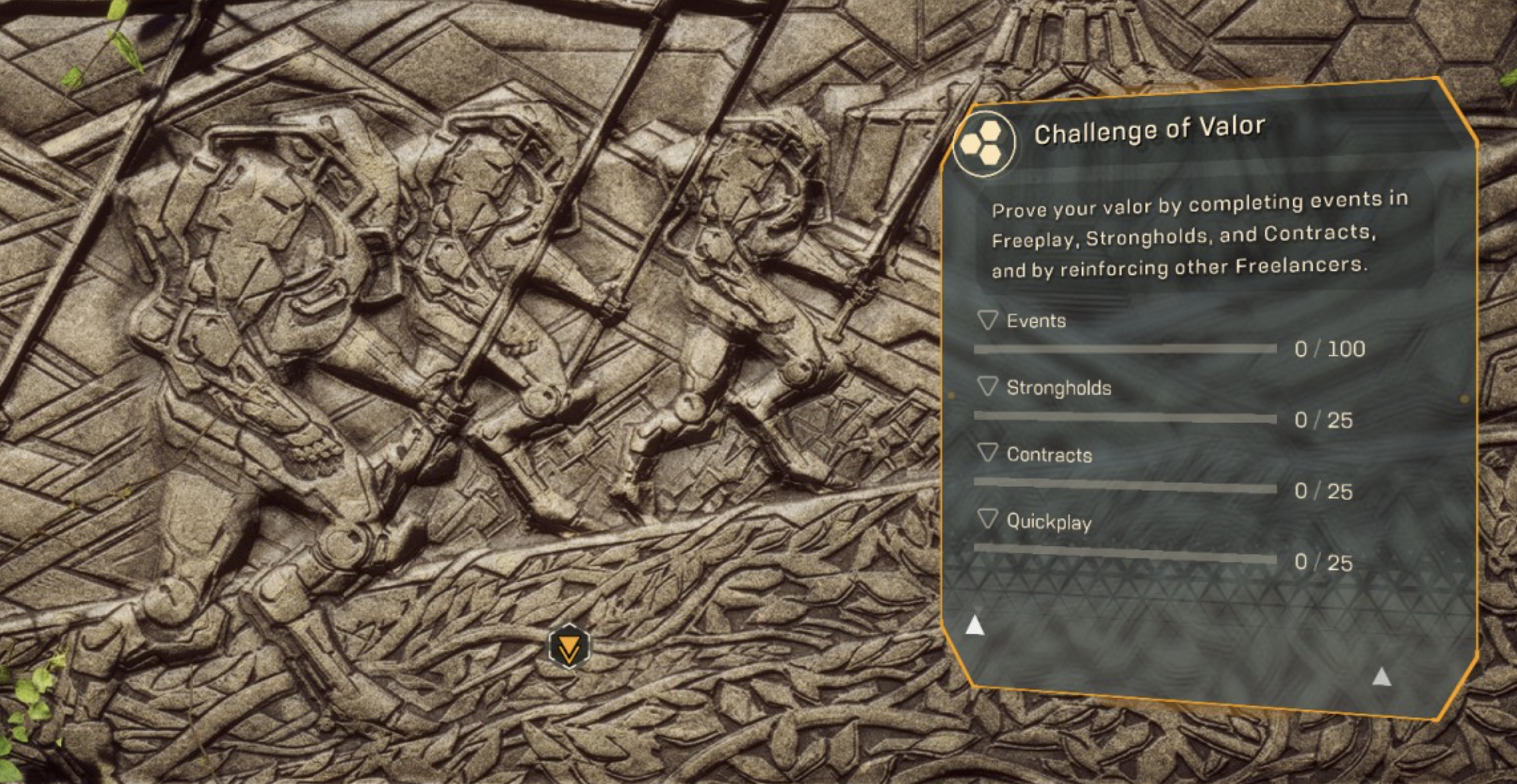 So if you grind and managed to complete all that then off course you get a reward. We are hearing different things from different players. Some say they got a vinyl for their javelins, others say they got 10 masterwork embers (not gear but embers) and 4000 coins. X35 Earthwalker on the other hand got more stories from the story teller (bard) who loves to talk about the legionnaires like general Tarsis, Midderon, Magna, Ardan Vassa. Which in case you can’t tell SUCKS! Don’t get us wrong, we like the lore in the game and always like to know more but this shouldn’t be a reward for all that hard work and time spent. Now maybe X35 got some embers and a vinyl but we honestly don’t know as we got no notifications, pop ups or anything. In fact we checked out the challenges before and after completion and it displayed no rewards. We are kept in the dark and we are speaking for ourselves here. This disappointed us greatly and think that Bioware needs to do much better concerning this.

In Anthem’s defence you could say that honestly Anthem players who enjoy the game would be doing contracts, strong holds and freeplay anyway even without the challenge so we should just see this as extra bonuses, which is true to some extent. We are playing even without knowing about the challenge but a number of players do not play freeplay mode as it’s so far the worst mode for getting legendary gear from our experience. Like we mentioned, events pop up infrequently and when they do and you complete it, you might just get epic gear as a reward even when playing on grandmaster 2. Not good and not worth it. So everyone does strongholds for the good stuff and it’s where we got the most legendary gear drop from too. Also we haven’t come across a player who did quickplay. All that we know off who do quickplay only does because of the challenge. So no, not all players will be doing this stuff anywhere. 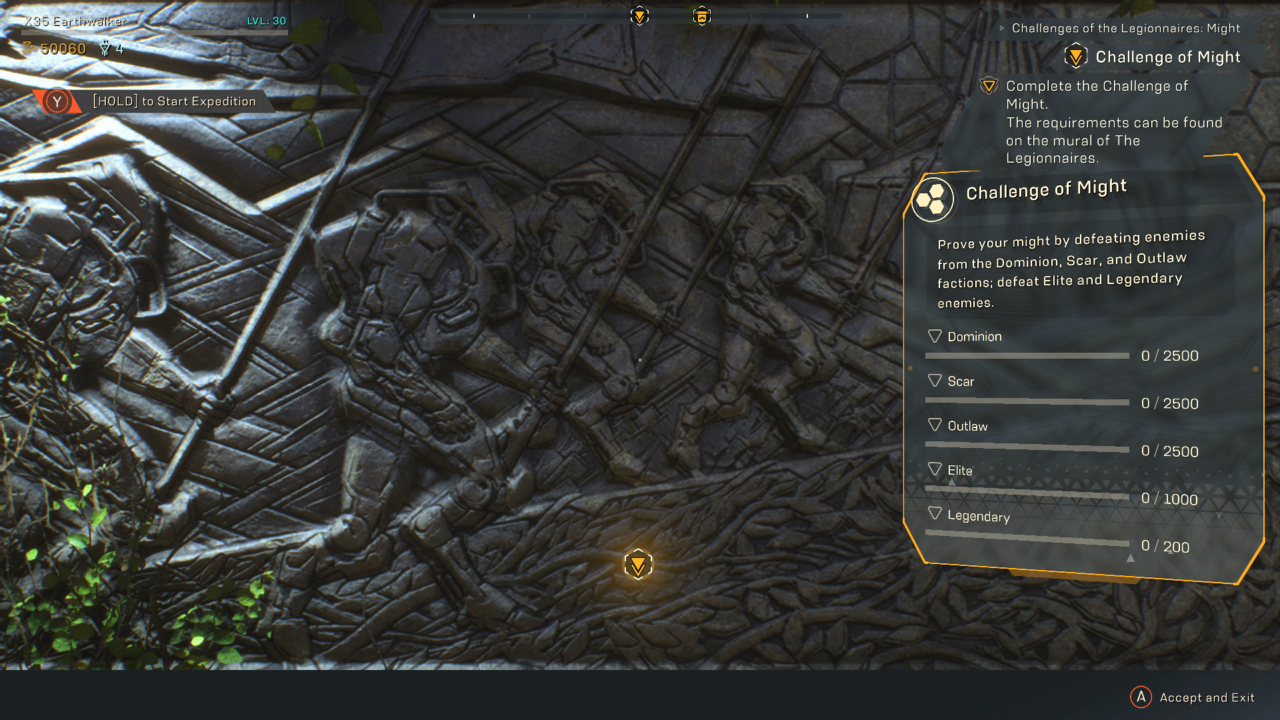 Also 10 masterwork embers is a poor reward too. Not making this up but X35 Earthwalker once harvested a plant or something (don’t exactly remember) and 25 master work embers came out which has never happened to us before. One random harvesting gave us more than the grand prize for completing a challenge which takes many hours to complete. That’s lame! Oh yeah, we didn’t mention that you get one more reward… you unlock the next challenge. The challenge of might… which is another big challenge, that will take many hours to complete as, that requires you to: defeat 2500 Dominion enemies, 2500 Scars, 25000 Outlaws, 1000 elites and 200 legendary units. That’s all. Now this is something you can complete naturally while playing but its still long but we can only wonder what the prize for completing all that is… probably a top hat.

Now this isn’t the first Anthem has done something like this. As we have mentioned in previous blog posts that you had to complete challenges to advance the story. Many players didn’t like that as the challenges also did take up some time. These challenges need to be done correctly. The rewards aren’t encouraging at all. We literally lost all steam for completing these challenges. We checked online and many there players feel the same way. The Anthem developers needs to improve this by adding in rewards that are actually are good and worth it. So overall what we say to the players who haven’t completed the challenge of valor yet is, take your time. Now the rewards for completing the challenge of valor isn’t worth it but there are some god rewards in… the ‘Earth Walk!’