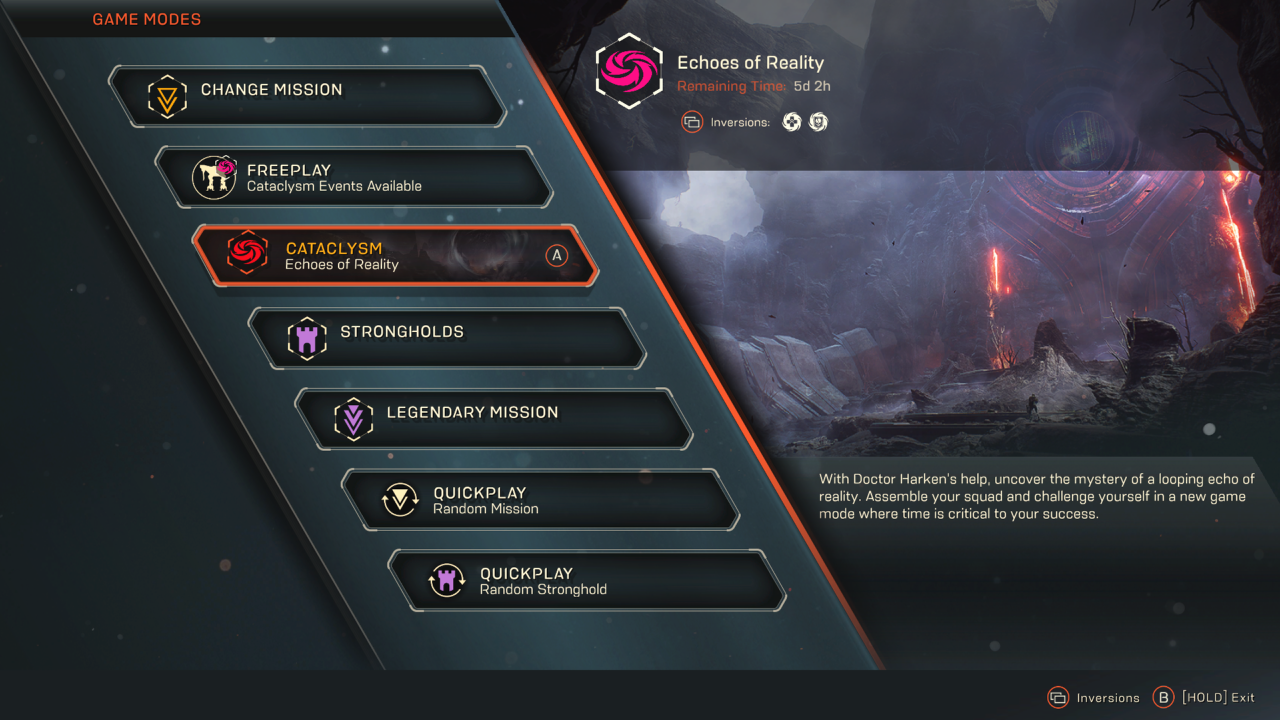 Anthem is the online multiplayer action role-playing game that had a good start but things started to go down hill due to a number of problems and expectations. Many voiced their opinions on the game and most gave negative feedback which is fair as some things needed to change. Now we at X35 Earthwalker do not listen to people like Angry Joe who at times don’t know what they are talking about and give bad reviews. No. We check things out and see for ourselves instead of jumping on the hate and hype train for views. Some new stuff has been added to Anthem and we are going to talk about them for a bit. Let’s take a look. 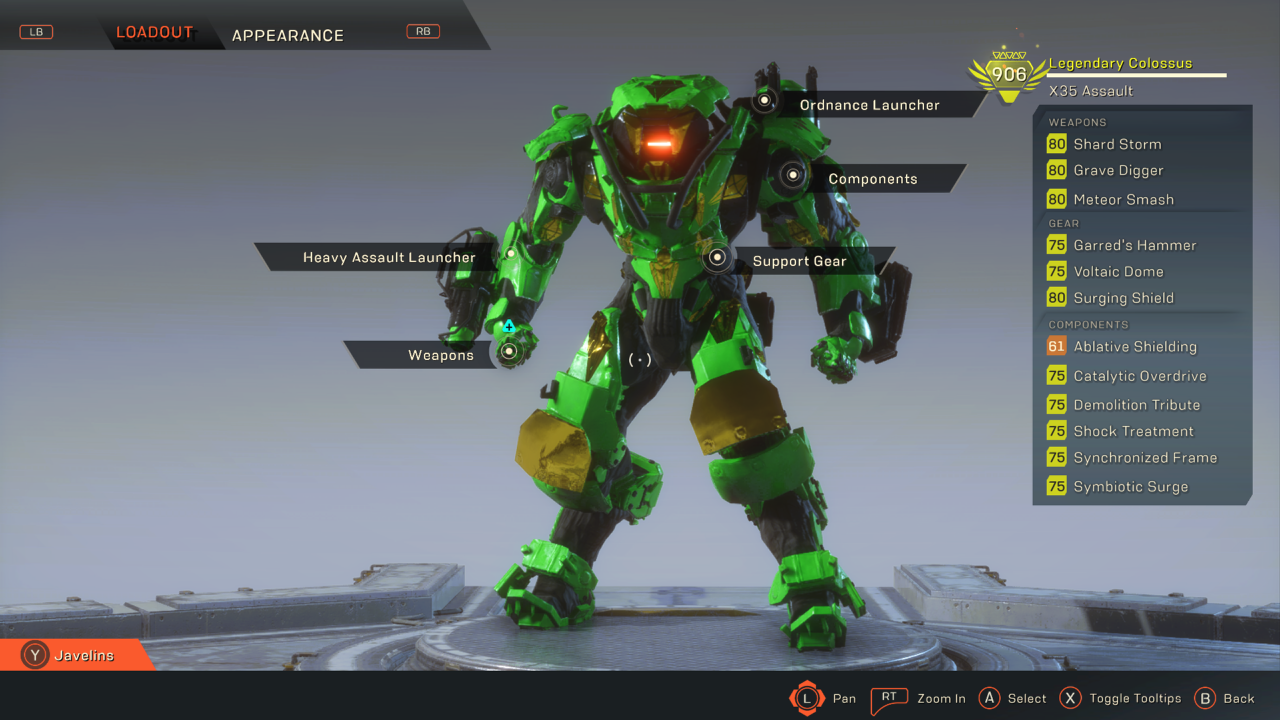 The reason X35 Earthwalker stopped playing Anthem much was because there was nothing else really left to do and it became not fun anymore. This changed for us. There are new story based missions now. If you look up at the sky you will notice a large cataclysm. The big boss behind this one is Vara. She’s the sister of the Monitor and she’s also dangerous (the monitor is way better though). You will need the right gear and help to get into the cataclysm and therefore require help from allies and maybe even foes to get it done. You’ll encounter characters who you knew of but couldn’t interact with like Grandmaster Adam (he doesn’t deserve to be called a grandmaster) and even Dr Harken. It’s not clear what we will find in the cataclysm but we know Vara will be there. She won’t go down easy.

Now there is a whole new game mode. Cataclysm: Echoes of Reality. In this mode players must zoom to the different cataclysm locations and destroy the crystals set up there to end the dangerous activities. The ways to open up the crystal for a clear shot is different for each one. For example one of them is just straight up co bat as in you must defeat the numerous enemies coming out of gates and then face a Fury guardian to get a key. In another you must interact and shut down 7 parts of a large mechanism to take down the field protecting the crystal. While the others are more puzzle based we will discuss this a bit later. When you want, you can go face Vara herself. So far this mode is fun. 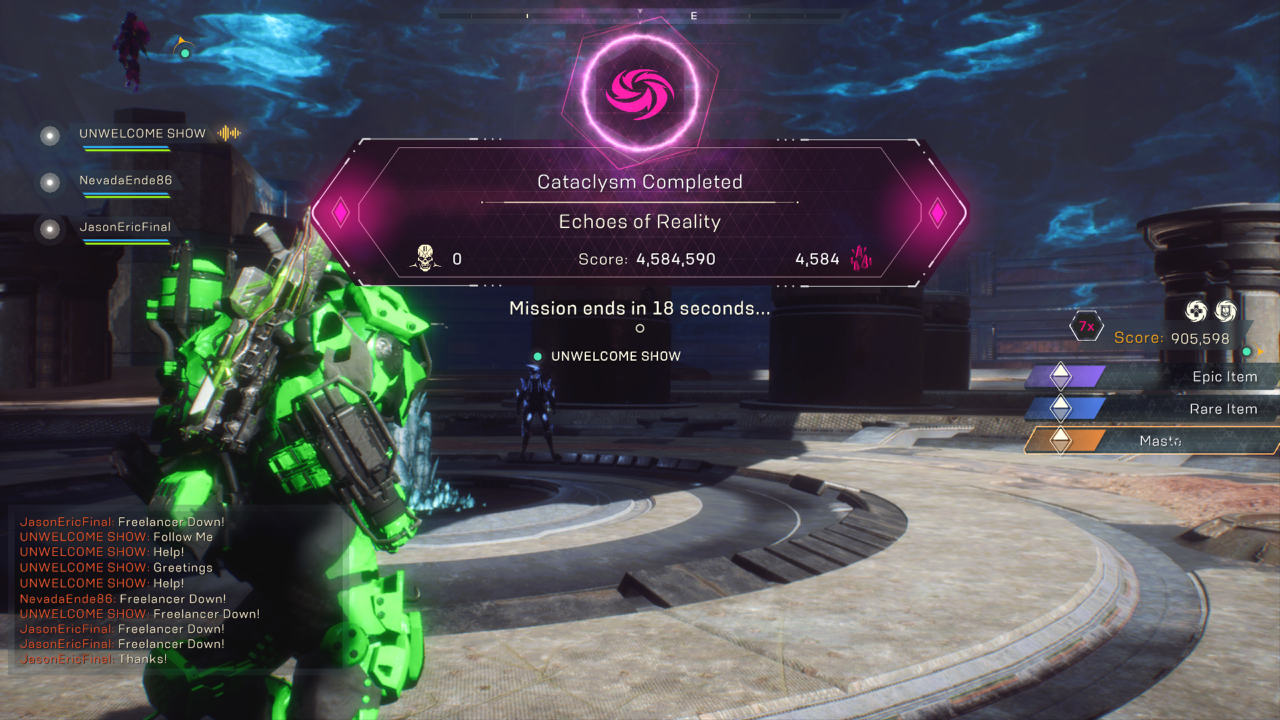 Every enemy you kill gets you points. Every crystal you destroy gets you points. Concerning the stability let us explain. The moment you leave the starting area, you’ll notice the storm and your javelin will lose Stability. Staying in this storm will cause you to lose all Stability and you’ll die. There are safe bubbly areas throughout the map, as well as little blue orbs or items to pick up that increase Stability, but during an event the safe area will suddenly vanish. When that happens look for the yellow sphere normally in the air above the area, and shoot it. Once it explodes the safe zone comes back. Fighting in the unstable fields increase your score multiplier but being in the unstable fields for too long will cause great damage to your javelin. You have fixed inversions that change pretty much every week (more like 5 days). They are basically bonuses that work to your advantage like marksman rifles do more damage or when you have low health you do more damage and killing an enemy gives you shields etc. If you beat Vara your final score is doubled. 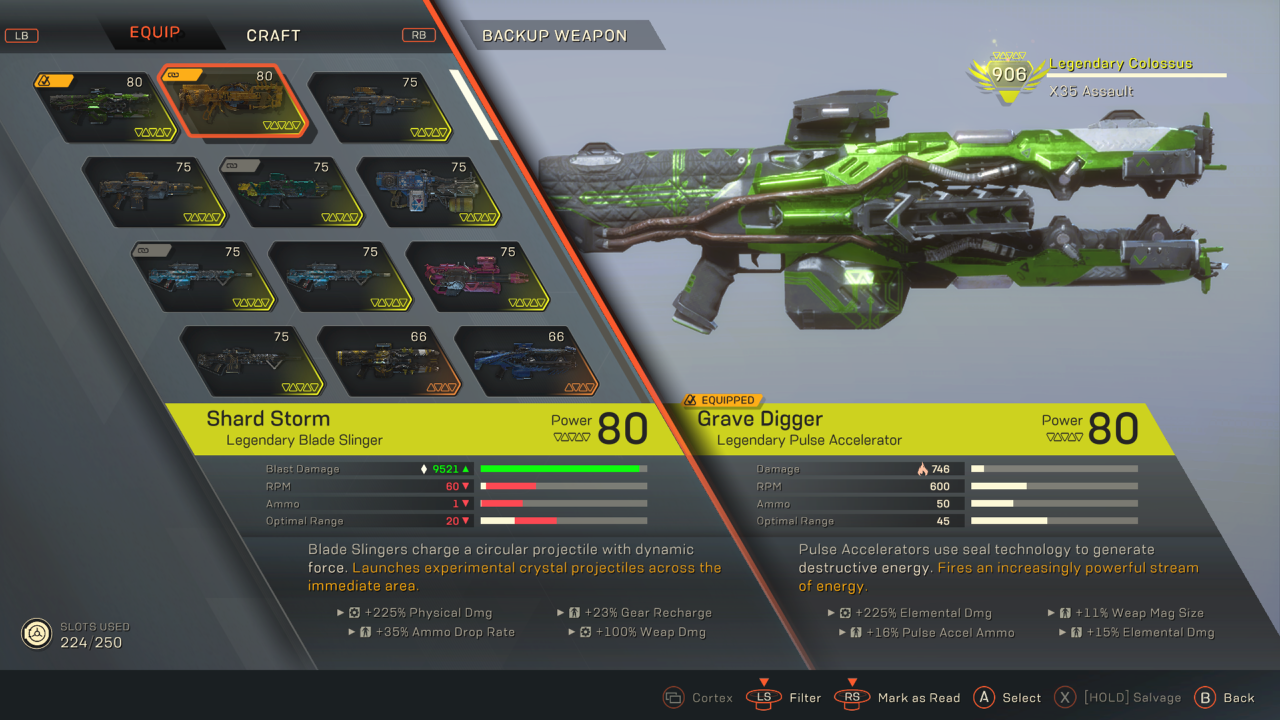 There is also new weapons and stuff for your javelin. Are you tired of receiving the same weapons as loot? Well we certainly are. There all new weapons now for players to get. They are literally all new as they don’t fire like any other weapon before it. The shard storm as shown above is a big blade slinger. It fires one big shot that travels through all enemies and hits enemies multiple times for big damage which is great against the scar enemies with big shields. The Bad Omen is a pulse accelerator that charges to fire a burst of energy projectiles. The Flashfire is a volt caster that fires a lightning attack that jumps from enemy to enemy. Jarra’s wrath is also a vol caster but fires a short range lighting arc. Razorwing is a blade slinger that launches a big blade that bounces between targets. Riza’a ripper is also a blade slinger that fires a barbed blade that once a target is it inflicts ongoing shrapnel damage. Also new are melee weapons. The javelins can now equip different melee weapons which have different effects. For example the colossus javelin can equip the Earthshaker which isoseismic glove that smashes into the ground to cause damage in a large area around you and releases a shockwave to hit enemies in front. The other weapon is the Meteor smash which is a flaming love that burns enemies around you in a large area that does very big burn damage. 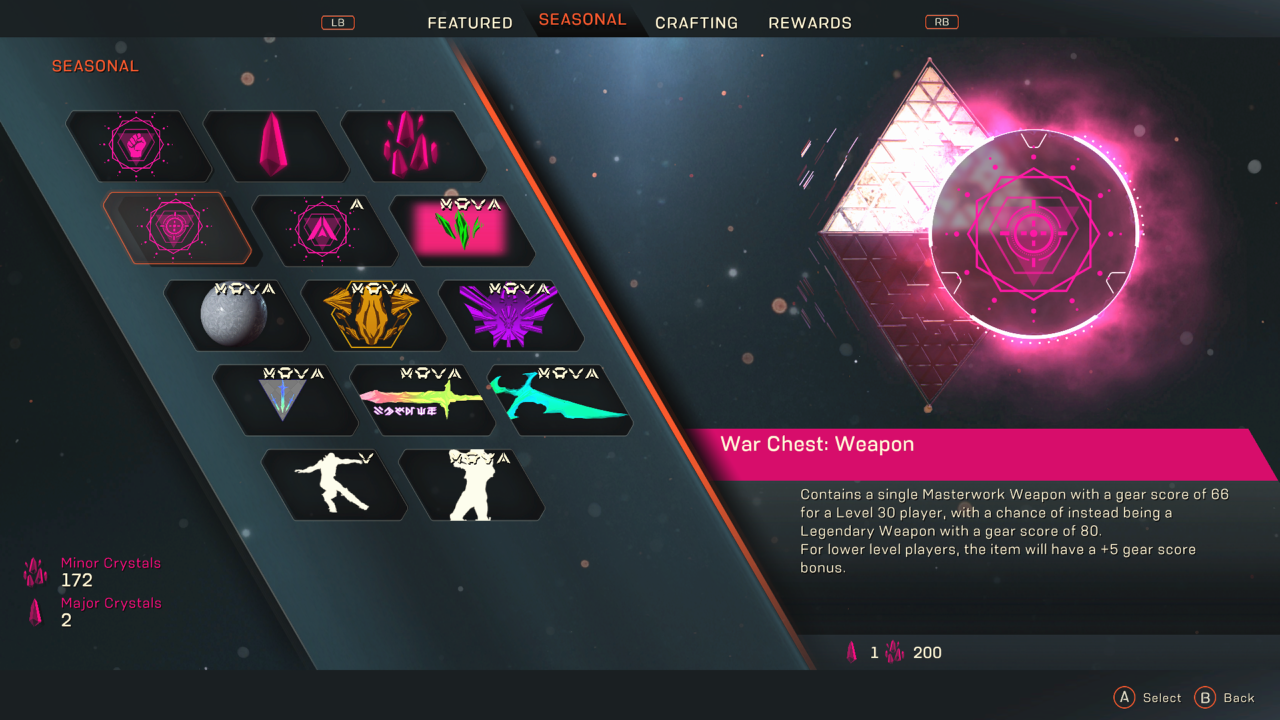 Lastly that’s new is that you can now earn new in game currency called major and minor crystals which you can spend at the seasonal store to get cool new items, weapons, materials, animations, decal, wraps and stuff. You can also convert your minor crystals into major crystals and vice versa so this is useful depending on what you want to buy. The store changes pretty much every 6 days or something like that. So new stuff is constantly showing up. This does mean weekly updates are happening in Anthem. We’ve gotten awesome new weapons, looks, materials and customisations through this. If you are playing Anthem then you have to use this store.

That’s pretty much all the new things that Anthem has. One big criticism we do have is that during the Echoes of Reality new players will have no idea where to go and what to do unless they are with some players who already know what to do. This happened to us at first. Unlike in the main story missions there isn’t an indicator that directs and shows players where to go until they are already near it. This means players could wander about or sit around waiting for a direction or confused. We figured out later that we can just use the map but that means your flying blind for a moment and certainly can’t use the map during combat. Even the areas that you are in doesn’t tell much at all on how to get to the crystal. You have to figure out the puzzles yourself. We didn’t know you needed the nodes to grant access to the node underwater and then two nodes outside to disable a field and then carry out all the nodes to then get to the stations outside while being attacked by enemies. More information and guidance is needed. Once you know though, it’s all easy. 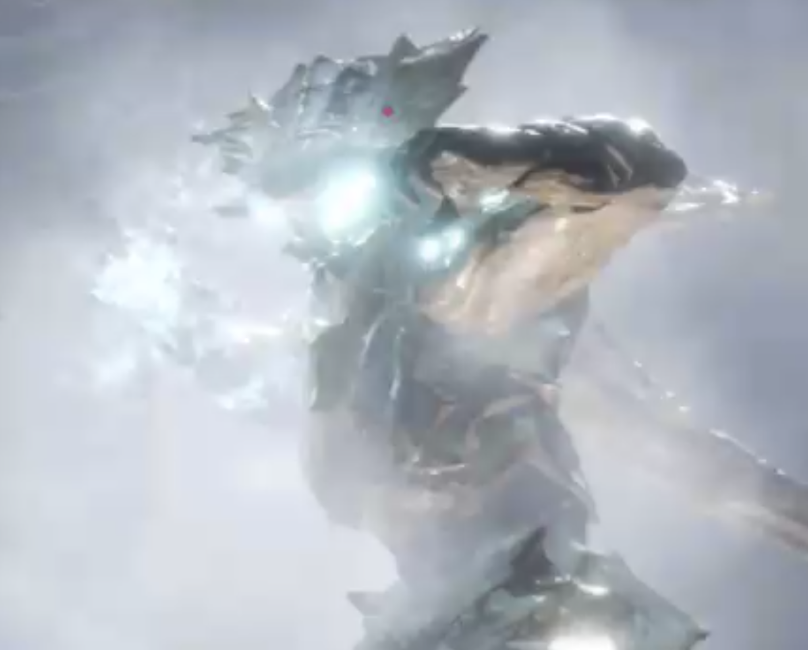 Overall we are enjoying the new stuff that Anthem has going on and we are glad to see that the developers are getting a move on to make this game the big awesome game it has the potential to be. Fighting Vara is a fair and enjoyable battle. Her health isn’t too ridiculous and the battle is easy to understand. If you wanted to try Anthem then this is a much better time to actually do that. We hope the developers keep this up. We need more stuff like this. We are seeing a lot more players in the game and the community is as friendly as ever. Now Anthem might be doing better but it’s never going to be as good as… the ‘Earth Walk!’