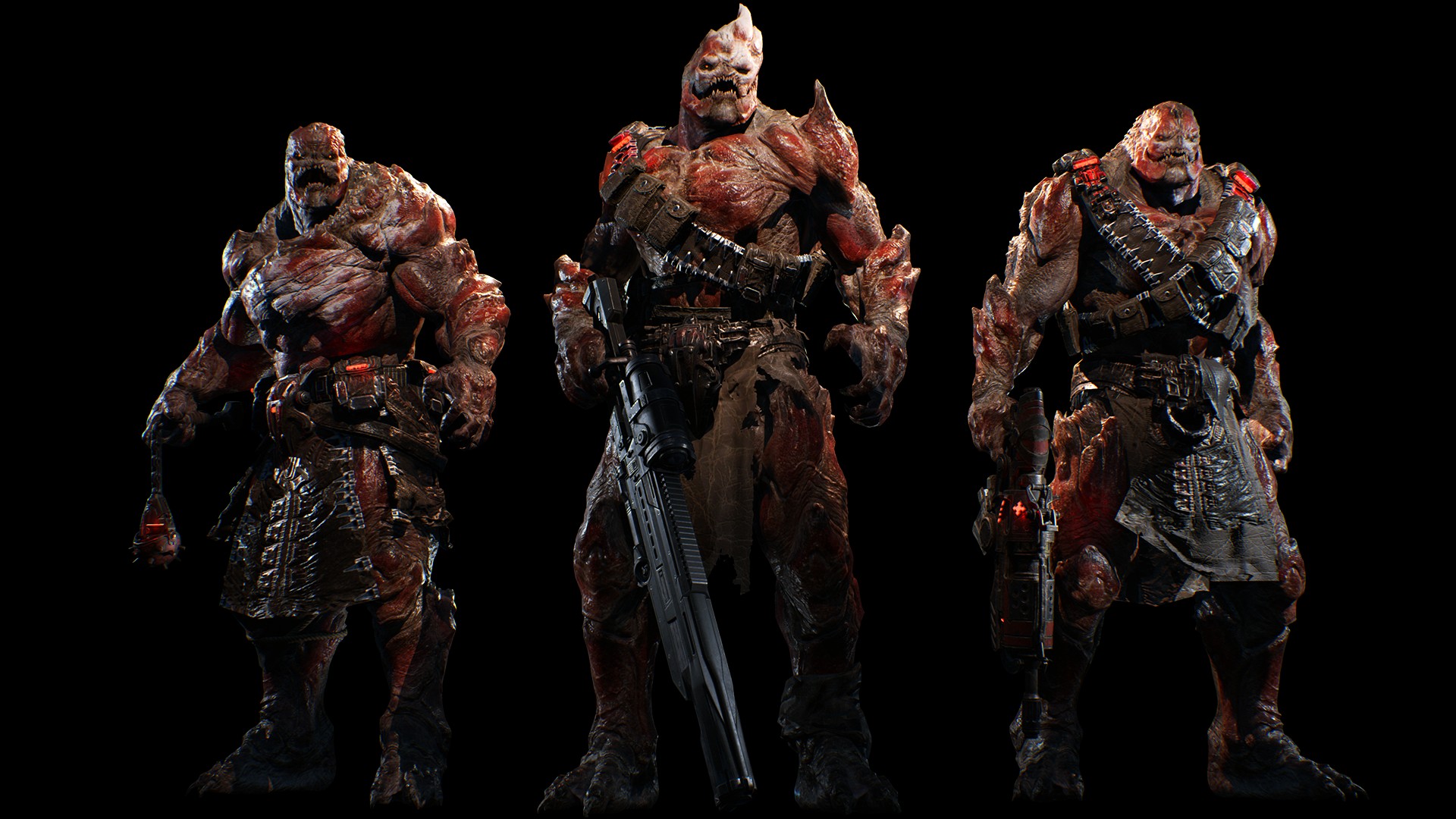 Gears of war 4 horde 3.0 is known now for being incredibly hard to complete. Getting from wave 1 to 50 is proving to be a problem. Some have had problems with casual. Many are struggling with normal. Pretty much everyone is finding hardcore too hard. Insane is just plain insane (Forget about it). X35 Earthwalker has done hardcore difficulty and said that it was really hard and was glad he had awesome team mates. We decided to give some advice on how to tackle hardcore and insane difficulty.

First things first you yourself has to be ready. Please don’t join a team knowing that you are far too weak or haven’t got the skills yet. It will sabotage the team and ruin the whole thing for everyone. How do you know if you are ready? Well how frequently do you die in easier difficulties? Do you know when to stay back? Do you stay in cover. Do you fulfill the role of your class? In hardcore and insane you can’t be messing around as enemies will become so strong that they will punish all your mistakes and destroy your team. Do you need your own team? X35 Earthwalker said that he did hardcore with random online players and no mics. It just comes down to having a good team. Normally at hardcore the players are serious and actually want to complete it so trolling is less likely. So just search for a map and get into the action.

Next. What about your class skills? Your class must have at least 3 skill card slots but preferably four (The more the better). At least one of your skill cards should be level 5 and all the others should be level 4 (except epic skills). Now it does come down to what classes are in your team. Going all soldier will work very well for most of the game until you suffer from a lack of energy so variety is the secret here. The best combination of classes are: 2 soldiers, 1 engineer, 1 scout and 1 heavy. The reasons for this is because firstly soldiers are overall the most useful and versatile class. hey have good defence, dish out high damage constantly and can end the enemy push with one move. Off course over variations work well too like have 1 soldier and 2 heavies instead, which by the way is very strong but ammo may become a problem. At the end of the day do the combination that works best for you. Never have two snipers or two engineers as that is never a good thing. You never need two of them but you must always have an engineer and a scout. When a high level scout and engineer work together, they end up being the reason why you beat hardcore and insane in the end.

The one class that isn’t necessary is sniper. Snipers kill enemies at a much slower rate than other classes, they don’t do the most damage, they have no extra abilities and their epic skill is the weakest of the 3 strike skills. The soldier needs maxed out rifle damage (50%), at least level 4 grenade damage, ammo capacity and must always have the hammer of dawn skill. The hammer is the secret weapon that will save you and the whole team. The soldier must plant grenades to seal of areas from attacks and kill everything small and big. Heavies should have at least a level 4 explosive ammo capacity and damage. Mark damage is a good and can add that extra damage needed to kill bosses quick. Heavy weapons damage is up to you. The heavy must simply blow up everything that walks. Normally they ought to save some explosives for bigger enemies and destroy the bosses. Scouts must have maxed energy deposit, no questions asked. Other skills like maxed out movement speed and maxed out starting health truly comes in handy as time and low health can be an issue but when you combine those two you can be the main person to revive downed team mates. 50% energy deposit + the scouts natural ability to collect double energy is the best way to get energy. Engineers must have the repair tool efficiency skill maxed out and have at least a level 4 fortification health boost (which is a general skill). Those two are a must. Equipping the turret health boost and cost reduction will save you lots of energy as turrets are the most expensive things and always get targeted to be destroyed.

In the first ten waves you can take it easy and stay in cover. Only let the scout collect the energy. Only let the engineer to all the building. Try your best to safely complete all the objectives that appear in the waves as you need the energy they give. Do not buy weapons from the fabricator as you can scavenge many great weapons from dead enemies, everything from drop shots to grenades; however the only exception to this rule is if a soldier wants a retro lancer which doesn’t cost much. Think about how much damage a soldier could do with the rifle damage boost plus the power of a retro lancer. It becomes like a mulcher, seriously. If low on ammo for the whole team then open up an bonus creates you got from completing objective during waves as some instantly grants big ammo to all team mates. Make sure you have a line of turrets for the bosses as they are the only things that can kill the bosses before they reach you. Once bosses like the carrier and especially the snatcher enter your base, it’s almost all over. A heavy who has the increased turret damage skill can easily be the highest damaging thing in the game and will defeat any boss.  Level 4 turrets are a must have. X35 Earthwalker once had two other team mates and himself focus their level 4 turrets at a kestrel and that boss went down really fast… both kestrels.

Never forget this one thing. Hardcore and insane are completely different from normal and casual. The enemies take less damage and give out much more. In casual you could run in the middle of them and beat them all with your shotgun but it is not so in hardcore. When playing the harder difficulties and reaching waves 30 and above you start to understand how important cover truly is. If not in cover even a ‘Deebee’ robot is easily capable of downing you very fast. At waves 40 and above the enemies will punish you for being in the open for a couple of seconds. Sentinels with tri shots will down you in less than a second if they catch you in the open. Juvies are have said that they are the worst enemies in insane as they are capable of ruining your entire day. They can sneak up on your team and in two swings can down you and then head for your team mates. Never forget to mark certain enemies who could pose a threat like Scion boomers and Pouncers. Enemies like that deserve attention, so let your team know and deal with them safely.

The carrier and snatcher boss will follow you relentlessly, if you don’t have the line of turrets and powerful weapons then you have to do the ‘leading strategy’, invented by X35 Earthwalker himself. First of all, the chances of this strategy succeeding once dealing with the higher level waves is lower than normal. By wave 40 you should have a fortified base with powerful turrets by then. Basically your whole team moves together as a team and leave the base. moving around the border of the map while killing everything in your path. You must be together as that’s the only way to save each other easily and beat strong enemies fast. This way the boss won’t destroy your base but instead keep trying to get you, saving you energy. It’s best that you have your heavies in the front so that they can blow stuff up without obstruction. Have the engineer and scout as a distraction and let your soldiers kill everything and plant grenades behind your team to stop any enemies from making a sandwich out of you guys.

What is probably one of the most important factors is location. Where you place your fabricator and build your base are immensely important. If you build in the wrong place, you will find that you get attacked from too many angles. if this happens then you won’t get far at all. Next is the location of your team mates. Your engineer has no business being at the front lines. The engineer must stay behind the others but top priority is the base and repairs. The soldier must be at the front line. The scout must be assisting everyone and be the first to help with revives. the speed increase skill is very useful and versatile. The heavy must be second to the soldier. Deciding who gets the ammo boxes is important. Heavies run out of explosive ammo fast and so should be a higher priority for ammo. Make sure that everyone gets ammo. special loot you get for completing challenges should be saved up until later waves and only opened when fighting bosses. if you need ammo then just scavenge from the dead enemies. Always stay nearby and never separate from the group do whatever you want after the wave is done. If your team is getting overrun and all hope is lost then have your soldier use the hammer of dawn ability to destroy absolutely everything because it will.

The last to remember when taking on the hordes is to gain experience. Get playing and give it a go. Don’t be afraid to fail at a wave. Try your best and have fun.