The Locust are finally here in Gears of war 4. Earlier today the Locust Drones pack was released. We at X35 Earthwalker have been waiting all this time for the return of the Locust as they were awesome enemies and part of what made Gears of war what it is. We had nothing against the Swarm but the Locusts were much cooler and scary. Finally they brought them to us.

So whats in the Locust Drones pack? The contents that you can get from these packs are 2 locust characters and 2 enemy themed weapon skin sets. That’s it. Only 2 Locust characters. Just 2. No queen Myrrah or theron guard. That’s disappointing to be very honest. We know their strategy. It’s to bring things out bit by bit to keep gamers waiting and gaming to help keep the game alive for as long as possible. We understand it from a business point of view but it’s suppose to be about the gears of war gamers firstly.

Fine then. At least we get 2. What’s the price for 1 of the Locust Drones pack? What!!! 2000 gold coins! Now they have really crossed the line. Is it just like with the UIR pack which charged really high for a bunch of random items which didn’t guarantee anything. You could get doubles. Surely no but it is. X35 Earthwalker had enough to get two Locust Drones packs and after opening them both he got none of the Locust characters when he could have used all those coins to get well over 11 horde packs. It’s disappointing. At least each pack gives you 5 items but gamers like X35 Earthwalker have been excited and waiting for the Locusts for time now and got nothing. Now they expect players to grind their game until they get 2000, 4000, 6000 etc to open the packs. We actually don’t have the time. Once again, like with the UIR pack, we are greatly disappointed. 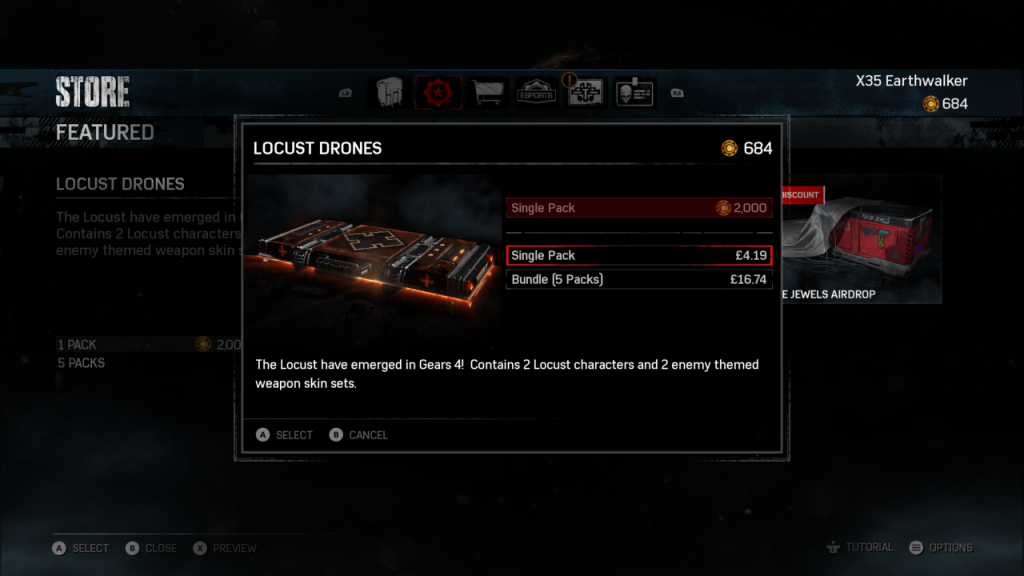 What’s also annoying is that the packs also gave out skins from different packs like the chillin lancer. Why is it here? Why can’t they just keep it Locust Drones stuff only? It’s not that hard to do. The other skins like the Juvie for the snub pistol and the boomer skin for the markza do have locust theme colours which is nice and how it should be. We have nothing against the contents as we were looking forward to them. It’s just how they are doing this is horrible.

Overall we say that if you have the gold coins then get some packs and get your locusts. If you have little gold coins then wait and hope they lower the cost. If you have real money to use on games then buy some and give us half (don’t be cheap now). Otherwise we aren’t too bothered to miss this at all. We are sorry Locusts as we love you guys (even though you kill humans) but you aren’t worth that much time. So whether you buy it or not… don’t forget to do the ‘Earth Walk!’